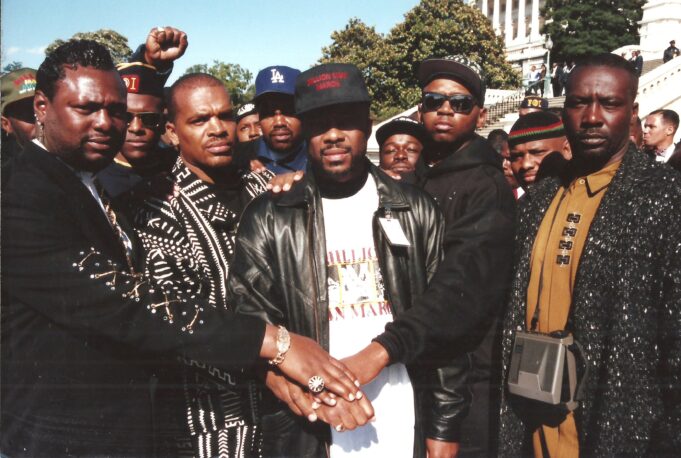 Twenty five years later, one of the most often repeated questions about the Million Man March is “what are the action steps that happened after the March?”

A plethora of answers pour out about the October 16, 1995 Million Man March: Holy Day of Atonement. Not only was the event a truly inspirational one, but it was one that was filled with organization and mobilization that ignited decades of more of the same.

Despite the murmuring of detractors, there were some sustainable and measurable aftereffects of October 16, 1995.

“The aftermath of the Million Man March was that it could be done,” said Congressman Danny K. Davis, a Black Democrat from Illinois. An alderman at the time, Mr. Davis  took three busloads of Black men to the March. “Those of us who were able to participate will always cherish the experience, but we are not doing enough to share the experience with those coming behind us,” he said.

On that day, there were Back men from multiple generations standing shoulder to shoulder many for 10 hours or more—sharing, learning, listening, fasting, hugging, crying, laughing, and praying. Everyone was represented: Christians, Muslims, Hebrews, Agnostics, Nationalists, Pan-Africanists, rich, poor, celebrities and people from nearly every civil rights, fraternal and civic organization, profession and walk of life were present. The day produced a spirit of brotherhood, love, and unity like never experienced among Black men in America. It was a day of atonement, reconciliation and responsibility.

“I made some strong spiritual connections that last to this day. It was a day of unity, a day of reflection, a day of pride,” said media professional David Bass Dancy, reflecting back 25 years.

This was a true display in the realm of Black male possibilities. For the first time, a couple of million Black men gathered in one space and not one argument or fight broke out. Here are some of the measurable things that happened after the March.

According to Forbes Magazine, after sporadic rising for 30 years, “crime rates plunged since the mid-‘90s.” The article referenced the U.S. Department of Justice which highlighted that “it wasn’t until 1995 that crime’s climb gave way to decades of decline.”

Based on anecdotal stories along with the message conveyed on October 16, 1995, no other event, program, policy, or initiative can claim credit for such dramatic decreases in violent crime. On that day, some two million Black men officially pledged before the world to do better.

Many Black men returned home with a renewed spirit to launch or grow their business.

One such person was Delxino Wilson de Briano, who the year before started TAG TEAM Marketing. He recalls the impact of that day on him as if it had just happened yesterday. “This is the first time in my life where I’m feeling safe and unified with more Black men than I had ever seen in one place in my life. And I’m from New York,” said Mr. Wilson de Briano. “When the Minister gets there, it’s like our father has arrived. He talks to us as men. We became men that day. He raised us that day. He gave us responsibility, he told us who we are and challenged us to do the right thing; to take care of our families and be better men and be more responsible and ethical. We got to hear it from the most powerful Black man who has lived in our lifetime. He challenged us. It changed my life.

“The point where he told us to do something to uplift your community, your people. He told us to either go find an organization that is uplifting our people or create one.”

Mr. Wilson de Briano and his wife Deborah founded TAG TEAM Marketing as a distributor organization in 1994. We built the largest, predominantly Black, network marketing sales team ever with to over 230,000 distributors, he said. Mr. Wilson de Briano earned his first million dollars at 26-years-old and taught thousands of people how to achieve success. The power couple expanded their team all over the world. Mr. Wilson de Briano said he held the number one producer position for seven years straight, producing over $100 million in sales annually.

“For the first time in my life, I could see what unity looked like. I could see what it felt like. And I knew what I had to do. From there we went on to build TAG TEAM to 230,000 and basically mimic what we saw that day,” he said.

The couple is currently leading a worldwide Buy Black movement they launched more than 10 years ago.

The gathering was the first financially transparent public March by Blacks.

Holding true to the principles of accountability expressed by Min. Farrakhan at the Million Man March, it provided an independent financial audit of its operations. The audit was conducted by Bolling & Hill, LLP on May 31, 1996.

It established an annual observance and holy day created by Black people.

Not only was it a March but encouraged by Rev. James Bevel, a veteran of the Civil Rights Movement, the Honorable Minister Louis Farrakhan embraced the idea of atonement and the day became known as the Holy Day of Atonement. Today, the Holy Day of Atonement stands alongside Kwanzaa and Juneteenth as special celebrations and observations established by Black people in America.

It mobilized Black men for community involvement and inspired a stronger sense of manhood and mentorship.

“I learned how to be a father, husband, brother, and son. I learned how to give back to a community that I had only taken from,” said Sidney Johnson, who attended the Million Man March and former Club Director at Boys & Girls Clubs of America. “I learned individual responsibility and how it ties into collective accountability. In short, I learned how to conduct myself as a man.”

Truly embracing the spirit of atonement, one couple created the Atonement Memorial Garden in 2019 to help those grieving of murdered family members. “These living memorials are garden-parks constructed by communities as part of our individual and collective atonement for our contributions to the conditions that led to the death of those being remembered,” explained Scott Muhammad, co-director of SEED, Inc, an organization he and his wife, Erica Muhammad, established in Tuskegee, Alabama. “This work and all the other things we have been doing are a direct result of the Holy Day of Atonement.”

Bernard Muhammad decided that day to help Black students get scholarships to college. “I have set up five college scholarships since 1996. Combined, we have given out more than $40,000,” he said. Although Mr. Muhammad was already involved in community uplift as a member of the Nation of Islam, he felt compelled to do more after attending the March.

During his speech, Min. Farrakhan urged the men to return to their homes and join an organization, church or mosque of their choice and get involved. Thus, immediately following the March, organizational memberships skyrocketed—the NAACP, churches and mosques reported huge increases.

It ushered a new wave of Black male political action.

At least 150,000 participants at the Million Man March registered to vote that day. Studies reported that in response to the March some additional 1.7 million Black men voted afterward in 1996 national elections—turning back a Republican onslaught in the process. Additionally, the Black turnout rate increased by about 13 percent between 1996 and 2012, according to the U.S. Census. This brought Black voting rates from behind non-Hispanic Whites by about eight percentage points to surpassing them in 2012. Incidentally, Barack Obama, the first Black president, was elected in 2008 for his first term. He also attended the Million Man March.

Increased adoptions were attributed to the March.

The National Association of Black Social Workers reported thousands of applications to adopt Black children after the Million Man March, which was one of the March action items. Ben Chavis, national director of the March, said over 25,000 Black children were adopted as a result of the gathering.

The March brought a day of peace in Black communities and prisons across the country.

All over Black America, Black on Black crime was down in many places that day. There were no arrests in Washington, D.C., the day of the March. In some federal and state correctional facilities, men were allowed to watch the March program on television, not work, and many had programs that included leaders of rival gangs speaking on unity and working together.

“Many of the administrations in the federal and state prisons allowed brothers to be off work and watch the Holy Day of Atonement,” National Prison Reform Student Minister Abdullah Muhammad told The Final Call. “Some prisons tried to make it difficult, but the brothers in the NOI stood strong and were able to watch. There were no reports of violence between opposing organizations that day,” he added.

Many men who heard the message in prison, became better men and accepted more responsibility for their actions and worked to improve their family relationships.

Prison walls could not keep Gregory Muhammad who was incarcerated at SCI-Mahanoy, located in rural Schuylkill County, Penn., during the Million Man March from participating. A leader of the Nation of Islam prison study group, he shared the message of the Million Man March with his fellow Black and Brown brothers. “We discussed not going to work on the day of the Million Man March regardless of the consequences,” said Gregory Muhammad, who spent 34 years in prison and currently serves as the Nation of Islam Student Prison Reform Minister for the Delaware Valley. Fortunately, most of the supervisors agreed to the day off.

“On the day of the March, you could hear the sounds from the March, on TV sets throughout the cellblock. The day after the March, the Black and Brown inmate population were on the yard expressing love to one another and declaring unity. It was so beautiful.”

The day produced lasting changes among Black men who were in prison. “While residing at FCI-Talladega I received a letter from my daughter requesting to reconnect. It was quite overwhelming due to what the Honorable Minister Louis Farrakhan instructed us to do in terms of the Eight Step process of Atonement,” said Zachariah Muhammad, who now serves as the 7th Region Student Prison Reform Minister.

“(That day) gave me a complete and much more fuller perspective of the characteristics of divine manhood that we should be embracing as Black men,” he said.