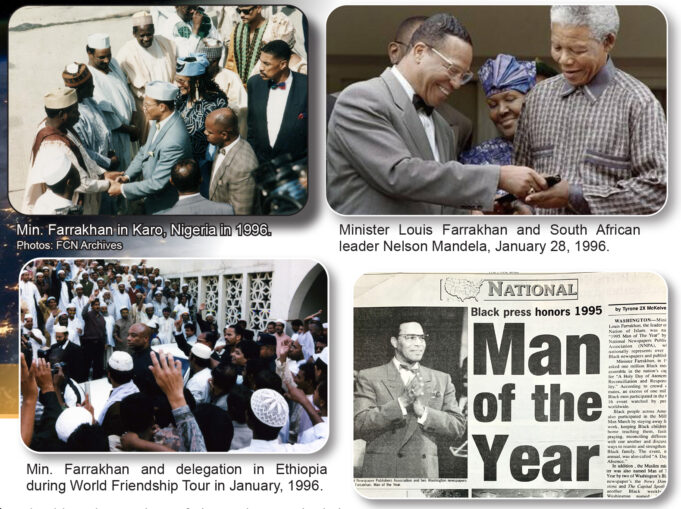 “That (world) trip that I made was the greatest trip made by any Black man in the history of America,” said Minister Louis Farrakhan in 1996 while addressing the National Association of Black Journalists (NABJ). “White folks will not tell that story. Every word I said (while traveling abroad) I got all the film… and we will release it, so you can see how your brothers and sisters all over the world handled me because of the Million Man March and my work in America,” the Minister said, recounting to the Black journalists seated in front of him the impact the massive gathering of Black men in Washington, D.C. had around the globe.

Reflecting on other Black leaders that traveled abroad and had come under the weight of the U.S. government and its intelligence apparatus, Min. Farrakhan said: “When you saw (W.E.B.) DuBois and they took his passport, and they wanted him to register as a foreign agent…” he said. He also explained similar instances happened to Malcolm X, Marcus Garvey and Paul Robeson. Raising his voice emphatically, Min. Farrakhan said, “call the list!” as he began discussing the price Black leaders, including Martin Luther King, had to pay for efforts to unite the struggles of African Americans with the struggles of oppressed people around the world.

This year marks the 25th anniversary of the historic Million Man March. On that day nearly two million Black men gathered, surpassing the 1963 March on Washington’s estimated 250,000 who gathered to hear Dr. King give his historic “I have a dream” speech. On that day many religions, institutions and national and community-based organizations, celebrities and politicians, across the spectrum of Black America came together not only for a one day affair but to build “what many saw as a movement directed toward a future renaissance of the black race,” noted blacklist.com.

While receiving the National Newspaper Publishers Association (NNPA) 1995 “Newsmaker of the Year Award,” at the National Press Club in Washington, D.C., Min Farrakhan said that he’d continue in his efforts to make connections around the globe and criticized the U.S. government and the media for misrepresenting the nature of his global tour he embarked upon after the October 16, 1995 gathering.

While at the Press Club thanking the Black press, he scolded mainstream media for its lack of reporting, “and because of the ugly things that have been said in the (mainstream) media.” He said to the Black newspaper publishers in the audience that he “personally feel it is my duty to come to you and explain to you my actions and my words.” The Minister continued, “So you may know I never betrayed your confidence, your support, or your love. But to the contrary, I built upon what we did (at the Million Man March) to establish in countries across the earth a worldwide day of atonement, reconciliation, and responsibility,” which was the theme of the March.

Min. Farrakhan’s delegation included editor of The Final Call at that time James G. Muhammad, now the paper’s contributing editor and former Muhammad Speaks and Final Call editor Askia Muhammad, who at the time was a frequent contributor to the newspaper and also a commentator on NPR and other news outlets.

“Not one press release mentioning our work during the tour reporting our actions and work correctly was ever used. It appears there is another plan and another design,” Min. Farrakhan suggested.

While addressing NABJ the Minister discussed his upcoming trip to Libya to receive the “Gadhafi Prize.” “Each year for the last six years there has been a prize offered for the person who has done, in the mind of the Geneva, Switzerland-based committee of nine… the most in their minds for human rights,” he said. “The award is named after a man with infamous reputation like myself. It’s called the Gadhafi Prize,” he said.

Other recipients of the award included: South African leader, Nelson Mandela; former Algerian president Ahmed Ben Bella; the Children of the Intifada and America’s Native Americans due to their struggle.

Min. Farrakhan said during a phone call from Col. Gadhafi congratulating him on the success of the Million Man March the Libyan leader pledged that “he would place the wealth of Libya behind the Nation of Islam and our work among our people.”

The Million Man March theme went from its 1995 theme of Atonement, Reconciliation and Responsibility to the theme “Justice or Else” in 2015, the 20th anniversary of the original gathering. That theme, which has resonated around the globe, began in February of 2015 at the annual Nation of Islam Saviours’ Day Convention. During Min. Farrakhan’s annual address that year he highlighted European colonial powers and their involvement in the past and current exploitation of Africa and the world’s natural, physical and monetary resources.

The Justice or Else theme, which was initially featured on the cover of a 1960 Muhammad Speaks Newspaper culminated on October 10, where thousands of people again showed up at the Washington Mall. During his Saviours’ Day remarks Min. Farrakhan gave special mention to France and its continued exploitation of the Motherland. Senegalese economist Dr. Ndongo Samba Sylla labeled this exploitation as: “The Invisible Weapon of Franco-African Imperialism.”

After reading off to Black journalists a list of francophone African countries and utilizing France as an example, the Minister read from an article, that mentioned 14-African countries that have been forced by France to “pay a colonial tax.”

“A hoard of cash sits in the Bank of France, billions of dollars in African money held in trust by the French government earning three-quarters of one percent of interest. The African countries under France have got to put 85 percent of their Federal Reserve in the Bank of France and they keep only 15 percent,” Min. Farrakhan read.

This was going on in 2015 and whether this system of exploitation has changed or as Dr. Sylla says just has the “appearance of changing,” is an open debate.

Many who have heard the term “Million” don’t know where it comes from, nor the power the first march represented. The Million March concept has been duplicated in Egypt, Libya, Yemen, Rome, Brazil, India, Argentina, Venezuela and Mexico, Nigeria, Zimbabwe, Sudan, Senegal and South Africa.

Sudanese using the Million Man March theme were returning to the streets to pressure the current transitional authorities and demanding justice for those killed during a massacre, at a camp that promoted peaceful demonstrations outside of the military headquarters. Comedian Desmond Dude, a familiar face on South Africa TV, took on a more serious role as activist in 2008 when he organized the first South African Million Man March against crime in Pretoria. In Zimbabwe in 2016 tens of thousands of youths showed up in support of Robert Mugabe and marched through the streets of Harare. Follow @JehronMuhammad on Twitter.