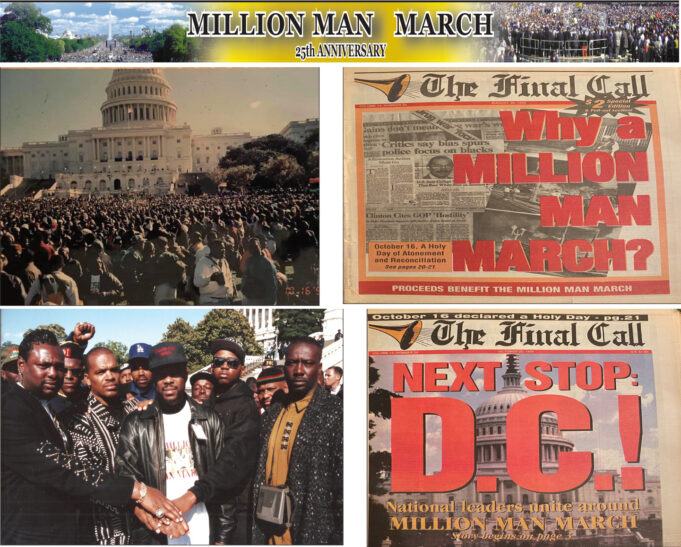 n 1995 the one thing the Black community had was belief. Belief it could overcome the scourge of crack cocaine, belief it could beat interpersonal violence, conflict in relationships, increased prostitution, child neglect, and abuse, and family dissolution that the epidemic brought, the belief that it could overcome disunity.

This backdrop gave birth to the Million Man March and one of the unsung heroes, Dr. Benjamin Chavis, at the time disposed head of the NAACP. Dr. Chavis was a brilliant strategist who re-imagined the NAACP during his short time in office. “There’s a yearning, an outcry for unity,” he said at the time in 1994.

Dr. Chavis called for a broad dialogue of all voices in the Black community—including Nation of Islam Minister Louis Farrakhan. He called for operational unity and accomplished this in 1994 with the NAACP-sponsored National African American Leadership Summit held in Baltimore, frightening White America. He was soon shown the door.

He was a natural choice to be called upon by Minister Farrakhan to head the March with serious street creds, imagination, organizational and tactical skills, and belief.

“I was honored to be chosen by the Honorable Minister Louis Farrakhan to be the National Director for the March, Dr. Chavis said in an exclusive interview with The Final Call.

“I got the call approximately six months before the March. Of course, there was a lot of speculation about if it was even possible to assemble a million Black men in Washington on Oct 16th. I believed it the minute I heard the Minister call for the March. Given my past experience of organizing in the civil rights movement, one of the principals is you don’t try to organize anything you first don’t believe in. So I believed as soon as the Minister uttered those words calling for a Million Man March that it could happen. That’s why I accepted the assignment, the appointment and went right to work,” he said.

Hearing discouragement from naysayers was nothing new for him, given his controversial tenure with the NAACP. “After I got the assignment, there were those who called me and tried to discourage me. Counseling me to decline the offer. I said no, this is going to happen.”

The opposition we faced was fierce, starting with the mainstream media, but we checked them with the Black press, Dr. Chavis said.   “Opposition also came from certain law enforcement agencies that were against the March. When we applied for various permits in Washington, D.C., we had to overcome many administrative obstacles. Tribute must be paid to Mayor Marion Barry. He fully supported the March and assigned his director of emergency preparations Sam Jordan to be my assistant. We were able to overcome a lot of the bureaucratic red tape and regulations to pull off something like the Million Man March.”

The major accomplishments of the March included 250,000 people were registered to vote at the March, said Dr. Chavis, who today is president and CEO of the National Newspaper Publishers Association, the Black Press. “We got thousands of children adopted through the NABSW (National Association of Black Social Workers); the men who took pledge went home and cared for their families, paid child support, and became upright in their community,” Dr. Chavis said.

“Long Live the Spirit of the Million Man March, you remember that chant?” he asked. “We can revive that spirit, but we have to refresh our memory, it is crucial for people to remember what happened 25 years ago. We should learn from our history, we need to revive the memory, we have to apply what we learned and the lessons that were given.”—(Michael Z. Muhammad, contributing writer)