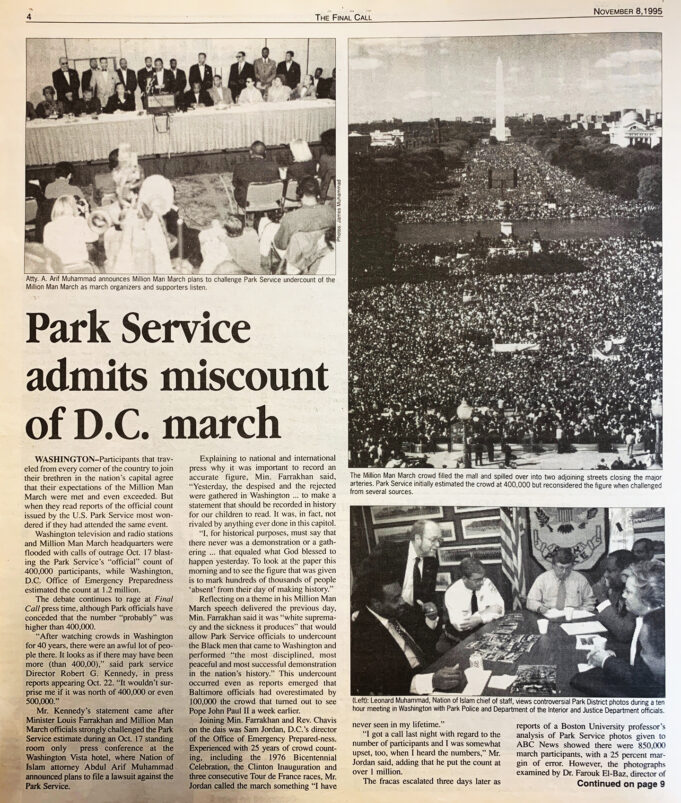 The Million Man March, October 16, 1995, was a day of great joy and a major victory in a world where Black men are denigrated, rejected, targeted, hated and stereotyped.

We live in the world of an enemy who has made us enemies to ourselves and to one another with us not knowing Satan throws a rock and hides his hand, creates circumstances to keep us perpetually in crisis and teaches us to hate ourselves.

But on that marvelous Monday, 25 years ago, there was a new, different and divine image of Black men. Men embraced. Men wept. When men who needed to get off the packed National Mall to get to a restroom, their brothers lifted them and handed them over, one to another to find relief.

Black women whether on the Mall or at home, screamed with joy, cried tears of pride, prayed and sent every ounce of love, energy and support to their men. Many of these women allowed men who had been absent in the lives of their male children to come retrieve their sons and make the pilgrimage to Washington.

Naysayers Black and White condemned the March, media “experts” scoffed and demanded that the March convenor, the Honorable Minister Louis Farrakhan, produce one million men—period. They harped on it. They mocked the idea. And, when Allah (God) sent two million to show His approval of His servant, White men could not count. It took a lawsuit and experts out of Boston, using aerial photography, to unbiasedly declare the crowd ranged from just under 900,000 to over 1.1 million men. The National Parks Service had come up with the ludicrous number of 400,000 men in attendance.

It was outrageous but not unexpected.

Black folk have been lied on, not counted, and were initially counted as three-fifths of a human being for the benefit of their slave owners. Our three-fifth’s status did not even accrue anything to those who were declared in the Constitution to be subhuman.

Sadly, the man who called the March was condemned and falsely branded a dark figure. But as the Minister observed in his magnificent message on the Mall: “Now, why have you come today? You came not at the call of Louis Farrakhan, but you have gathered here at the call of God. For it is only the call of Almighty God, no matter through whom that call came, that could generate this kind of outpouring,” he said.

“This a very pregnant moment. Pregnant with the possibility of tremendous change in our status in America and in the world. Although the call was made through me, many have tried to distance the beauty of this idea from the person through whom the idea and the call was made. Some have done it mistakenly. And others have done it in a malicious and vicious manner.”

Part of our problem comes from behavior described in the “Willie Lynch Letter” ascribed to a slave owner imparting lessons and quoted by Min. Farrakhan. Experts have said the man who is speaking didn’t exist and wouldn’t speak like that in 1712.

Still, read what the letter says and see if you recognize anything:

“In my bag I have a fool proof method of controlling Black slaves. I guarantee every one of you, if installed correctly, it will control the slaves for at least 300 years. My method is simple. Any member of your family or your overseer can use it. I have outlined a number of differences among the slaves and I take these differences and I make them bigger. I use fear, distrust, and envy for control purposes.

“I want you to listen. What are those three things? Fear, envy, distrust.” For what purpose? Control. To control who? The slave. Who is the slave? Us. Listen, he said, “These methods have worked on my modest plantation in the West Indies and they will work throughout the South.

“Now, take this simple little list and think about it. On the top of my list is age. But it’s only there because it starts with an ‘A.’ And the second is color or shade. There’s intelligence, sex, size of plantation, status of plantation, attitude of owners, whether the slaves live in the valley or on a hill, North, East, South or West, have fine hair or coarse hair, or is tall or short.

“Now that you have a list of differences, I shall give you an outline of action. But before that, I shall assure you that distrust is stronger than trust. And envy is stronger than adulation, respect, or admiration.

“You must also have your white servants and overseers distrust all Blacks. But it is necessary that your slaves trust and depend on us. They must love, respect, and trust only us. Gentlemen, these keys are your keys to control. Use them. Never miss an opportunity. And if used intensely for one year, the slaves themselves will remain perpetually distrustful.”

The Million Man March was a day of great unity but many tried to destroy it through division, often because they could not stand up to questions from White people about a man who has devoted his life to defending and protecting Black people.

Min. Farrakhan is our champion. Why should we reject him because our enemies hate him?

That shows we have not overcome our fear of the enemy and hatred of ourselves. It also shows a lack of appreciation for the blessings of Almighty God Allah and His hand on man for our benefit.

Nothing will stop our rise or the success of God’s servant in our midst. But just think, if we fully embraced one another and this special man, we could enjoy the Million Man March every day of our lives.