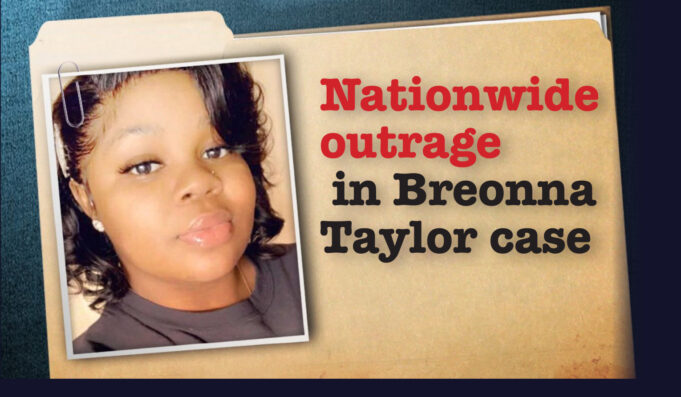 by Tariqah Shakir-Muhammad and Michael Z. Muhammad The Final Call

CHICAGO—“They murdered Breonna Taylor, this is ridiculous!” shouted a protestor the day Kentucky Attorney General Daniel Cameron announced the indictment of only one officer following the death of 26-year-old Breonna Taylor. Nationwide protests erupted  in the aftermath of the September 23 announcement that former Louisville police officer Brett Hankison was charged with three counts of wanton endangerment in the first degree but neither Mr. Hankison nor the other two officers involved in the fatal encounter were charged in the young, Black woman’s death.

On March 13, Louisville police officers broke down the door to Ms. Taylor and her boyfriend Kenneth Walker’s apartment executing a warrant. After Mr. Walker fired once thinking police were intruders, the police responded with over  27 rounds at least five of which hit and one fatally wounded Ms. Taylor. The indictment against Mr. Hankison stems from the errant bullets that penetrated a wall and entered a neighboring apartment occupied by three people. None of the shots 10  fired by Mr. Hankison hit Ms. Taylor, said Atty. Gen. Cameron.

In Chicago, hundreds went to the streets to  protest the decision. The Illinois National Guard was put on standby in case protests turned violent. “As we process this news, let’s not forget Tamika Palmer, Breonna’s mother,” said Chicago Mayor Lori Lightfoot during a press conference. “Nothing will repair the hole in her heart for the loss of her precious child. Too many mothers in Chicago know all too well the same pain, and we extend our condolences to Mrs. Palmer and her entire family on this tragic loss,” said Mayor Lightfoot.

Protests took place on Chicago’s predominately Black South Side. Chicago has its own long sordid history of police violence against Black people sparking several protests over the years. Father Michael Pfleger of St. Sabina Church told The Final Call his fear is that this latest case regarding Breonna Taylor reinforces the deeply held notion that there are two systems of justice. “Today is a reminder that we must keep fighting to bring equity and fairness to that flawed system,” said the activist priest.  “This system as it is isn’t going to become peaceful and just, we need to separate from it. But at the same time, I think that we need to continue to dismantle the unjust system … even if we separate,” he added.

Other Chicago activists were not surprised by the verdict but are just as angered. Tamar Menesseh, founder and president of Mothers/Men Against Senseless Killings (MASK) in Chicago, said the decision by the Louisville grand jury not to indict the officers who were responsible for killing Breonna Taylor shouldn’t surprise anyone.

“What are we supposed to tell our children when we put them down to sleep at night, that if they’re lucky, they won’t get shot before they wake up in the morning?”

The NAACP issued a statement in the aftermath of the decision expressing the organization’s disappointment. “The justice system failed Breonna Taylor and, as such, failed us. From the officers’ ill-informed conduct to the city officials’ delayed response, their actions have discredited their pledge and responsibility to the greater community. It is unacceptable that, once again, culpability has eluded those guilty of state-sanctioned murder,” the statement said in part.

Reverend Jesse Jackson Sr. called for players in professional sports leagues of the WNBA, NFL and NBA to discourage high profile athletes from going to the University of Kentucky and University of Louisville. “We must make economic life in KY inconvenient. This tactic has always worked for oppressed people,” the civil rights leader said via Twitter.

Others took to social media to express their extreme dissatisfaction and anger at the U.S. justice system.

“Every ounce of rage absolutely has been earned. What a slap in the face to not only Breonna and everyone that cared for her, but to justice itself,” Kathy A. Graham posted on Facebook.

Amana Mitchell posted, “It’s an outrage. I can understand why people are driven to looting and burning, marching and rioting. If she was my child and I was denied justice, I would rage. I am with you. We have to be strong at the polls in November. The orange circus peanut is going to try and steal this election. We cannot allow it. People’s lives depend on what happens.”

Samuel Gilbert, a senior citizen also weighed in via social media. “I’m 79 years old. And I can honestly say that basically nothing has changed since I was a young man… However; instead of them killing us by hangings, now these racist White individuals are using Guns always saying they feared for their lives facing unarmed Black men & women, when they’re fully armed against them!!!!” he posted.

Entertainers and celebrities also shared their anger, frustration. NBA superstar LeBron James said what makes it more devastating is that “none of us was surprised at the outcome,” he told reporters. “If you just look at the history of America and the disrespect that Black women have gotten for the last 400 years, you can’t turn a blind eye to that,” he said. “I felt it was important to let Black women know that they’re not alone. No matter the disrespect or what they may feel, don’t stop, because that’s exactly what they want you guys to do,” said Mr. James.

“I don’t even know where to begin … to say I’m angry, sad, disgusted, is an understatement,” posted NBA player Donovan Mitchell, a former Louisville Cardinals player, on Twitter. “As an African American man I am hurting not just for Breonna Taylor but for every victim that has come about due to police brutality … We as a country need to do better …justice needed to be served and it wasn’t at all …” he added in part.

The U.S. justice system has not changed, said Pam Africa of MOVE. “Given the climate the decision made not to charge the police was not unexpected. What they were not ready for was the people’s response,” said the longtime activist. “This government is so used to throwing a crumb out there and people taking it and going back into their corner. This time young folks today are not accepting this BS. They are not taking this injustice and they have never seen anything like this response. It’s exposure time. The Black Kentucky attorney general is being exposed. People are not seeing just the color Black and accepting what is being said. We are way past that nowadays. Things are clear,” said Ms. Africa.

Bigga Dre, a young hip hop artist, activist and owner of Inner Vibe Sound, told The Final Call the decision made in the case is a reflection of the state the country is in. “They say it is a deep state. Well they are showing you what the deep state is really all about. It’s a sign that not only do we need reform in the justice system, but we need reform in our community. If we had a system in place where we could prevent things like this from occurring, then it would not have taken place. We have to hold them accountable, but we have to also take responsibility that we need to do some maintenance with our community,” said Bigga Dre.

The grand jury’s decision on Breonna Taylor’s case is further proof that the justice system doesn’t include the Black and Brown community, explained Father Pfleger. “I think what it tells is that ‘lady justice’ is not blind and that’s how she’s been looking for a long time,” he continued. “They’re bold and aggressive about their arrogance about it and it kinda ends with a ‘so what?’ … Since it’s almost every week, it’s another issue, it’s another case, it’s another video, this thing is so discouraging that there were no bodycams—I mean, who does no knock orders in the middle of the night?  It’s so much wrong in this case.”

Stanley Crawford is president of the Philadelphia-based Black Male Community Council. He said what he sees happening is manifesting and proving what Nation of Islam patriarch Elijah Muhammad taught about trying to get justice from a system and people that was not meant or built for Black people.

“They are proving the Honorable Elijah Muhammad more right than wrong every day. There is no good in them (America) or their systems. They are great scientific deceivers. So, when I look at what is going on what I see is an affirmation of what the Messenger was warning us of, guiding us away from. We are staying with (White people) too long,” said Mr. Crawford.

“Messenger Muhammad taught ‘come out of her’ (America). The Fall of America, all of this is a manifestation of the message he brought. George Floyd, Breonna (Taylor) is just one aspect of his (White man’s) wickedness,” he added.

“There is no way you could see a person get murdered and charge the cop with something that didn’t even happen. Now you are going to use tricknology and deception to get people to believe what their lying eyes seen. This is a demonstration of their inhumanity. When you can choke a person with a smile on your face and shot a sister while she is lying in bed. Why would you go 12 a.m. in the morning? The attorney general is nothing more than a Black face on White supremacy. It shows that we are staying amongst them too long. We need to figure out how to separate from him. This has been going on for 400 years.”

It is time for Black people to put a system in place where we take preventative measures, said Bigga Dre. “Right now, we are being triggered and we are reacting. We should be correcting. There are a lot of organizations and community leaders such as Minister (Louis) Farrakhan putting together the 10,000 Fearless and other brothers who have systems; and I don’t think it’s just one, we need to collectively come together and resolve this issue by any means necessary,” he added.