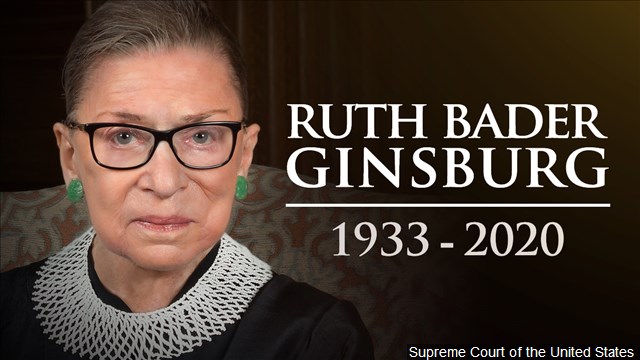 WASHINGTON—Supreme Court Justice Ruth Bader Ginsburg, a diminutive yet towering women’s rights champion who became the court’s second female justice, died Sept. 18 at her home in Washington. She was 87.

Her death just over six weeks before Election Day is likely to set off a heated battle over whether President Donald Trump should nominate, and the Republican-led Senate should confirm, her replacement, or if the seat should remain vacant until the outcome of his race against Democrat Joe Biden is known.

Chief Justice John Roberts mourned Ginsburg’s passing. “Our Nation has lost a jurist of historic stature. We at the Supreme Court have lost a cherished colleague. Today we mourn, but with confidence that future generations will remember Ruth Bader Ginsburg as we knew her—a tireless and resolute champion of justice,” Chief Justice Roberts said in a statement.

Justice Ginsburg announced in July that she was undergoing chemotherapy treatment for lesions on her liver, the latest of her several battles with cancer.

Justice Ginsburg spent her final years on the bench as the unquestioned leader of the court’s liberal wing and became something of a rock star to her admirers. Young women especially seemed to embrace the court’s Jewish grandmother, affectionately calling her the Notorious RBG, for her defense of the rights of women and minorities, and the strength and resilience she displayed in the face of personal loss and health crises.

Those health issues included five bouts with cancer beginning in 1999, falls that resulted in broken ribs, insertion of a stent to clear a blocked artery and assorted other hospitalizations after she turned 75.

She resisted calls by liberals to retire during Barack Obama’s presidency at a time when Democrats held the Senate and a replacement with similar views could have been confirmed. Instead, Mr. Trump will almost certainly try to push Ginsburg’s successor through the Republican-controlled Senate—and move the conservative court even more to the right.

Ginsburg antagonized Trump during the 2016 presidential campaign in a series of media interviews, including calling him a faker. She soon apologized.

Her appointment by President Bill Clinton in 1993 was the first by a Democrat in 26 years. She initially found a comfortable ideological home somewhere left of center on a conservative court dominated by Republican appointees. (AP)