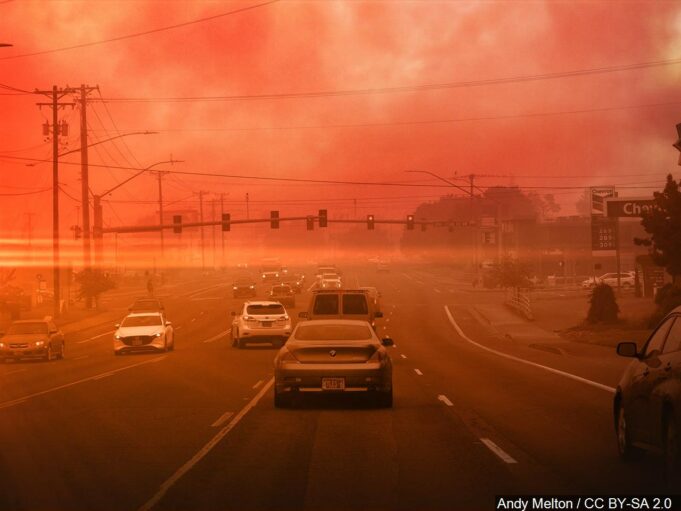 “Thou shalt be visited of the Lord of hosts with thunder, and with earthquake, and great noise, with storm and tempest, and the flame of devouring fire.” – Isaiah 29:6 (KJV)

In his book “The Fall of America,” the Most Honorable Elijah Muhammad wrote that calamity would curtail America on all of her sides.

Today, fires are raging in California, Oregon and Washington, and hurricanes, tropical storms and cyclones are surfacing in the Gulf. The week of September 14, the National Hurricane Center tracked two hurricanes, Sally and Teddy, one tropical storm, Vicky, one post-tropical cyclone, Paulette, and three other disturbances.

By September 16, Hurricane Sally a Category 2 made landfall in Florida and Alabama, and the center predicted “historic and catastrophic flooding” in parts of Florida, Alabama, Georgia, the Carolinas and Virginia. Though reports noted the slow pace of the hurricane, according to a power outage tracker, the hurricane shut down power for more than 500,000 customers on its first day of landfall.

Student Minister Abdul Haleem Muhammad, the Southwest Regional Minister of the Nation of Islam and an urban planner out of Houston, Texas, said winds from storms knock down trees, which knocks down powerlines and causes the power outages.

Hurricane Sally also dumped gallons of rain of up to more than two feet in some places. The city of Pensacola, Fla., one of the cities recovering from the effects of Hurricane Sally, is estimating about $20 million in damages as of September 20, according to data compiled by the city.

Alabama has reported two deaths resulting from Hurricane Sally. On September 18, the National Weather Service reported that after the formation of Tropical Storm Wilfred, they have officially entered the Greek alphabet for named Atlantic storms this year for the first time since 2005, when the naming reached up to Zeta. Tropical Storms Alpha and Beta formed soon after Wilfred, and Beta made landfall on September 21, bringing rain and storms to the coasts of Texas and Louisiana.

Christina Muhammad, coordinator for the 10,000 Fearless First Responders out of Austin, Texas, said the Honorable Minister Louis Farrakhan recently warned to watch the weather, referring to the Minister’s lecture on July 4, titled “The Criterion.”

“He said watch the weather. And our eyes may be getting tired and weary. We didn’t realize, when he said watch, how much of a detriment it would be. So here you have hurricanes, flooding on one end and burning on the other end matched together with the Covid-19,” she said. “Normally you have one at a time or one over here not so bad or one over here, but you got all of the different counterparts coming in, all from the indignation of God Himself. We’re taught He will use all of His forces against America, and this is actually what’s happening.”

Student Minister Willie Muhammad out of New Orleans is thankful that the city was spared from the path of Hurricane Sally. Louisiana is still reeling from the effects of Hurricane Laura, a Category 4 that has been termed one of the most powerful and damaging storms to make landfall in the U.S. and in Louisiana in late August.

“For those dramatically impacted by a hurricane even after the physical repairs are done, mentally, one is still impacted with trauma,” he said in an email to The Final Call. “Katrina took place in ‘05. However, every time there is a disturbance in the Gulf, I and others I know get concerned. These storms can disrupt our way of life,” he added.

Christine McMorrow, a public information officer with the California Department of Forestry and Fire Protection (CalFire), said over three million acres have burned in California since the start of 2020.

The fires in California started on August 15 due to a lightning siege, which happens when a storm produces thunder and lightning but very little rain reaches the ground. Ms. McMorrow said the fires have impacted infrastructure, forest areas, wildlife, and air quality.

“The air quality has had a huge impact not just on us here in California, but now they’re seeing the impacts from our smoke around the world,” said Ms. McMorrow.

According to the National Weather Service, smoke was carried to the East Coast of the United States, but remnants from Hurricane Sally have dispersed it. Student Minister Abdul Haleem Muhammad noted that the fires have wiped out whole communities and that the fire storms have even created their own tornadoes.

Ms. McMorrow estimated that the fires are costing millions, probably billions of dollars, though she could not give an exact figure.

In 2018, the total cost of wildfires was $24 billion, according to the National Oceanic and Atmospheric Association (NOAA). The association reports that 2018 and 2019 each saw $14 billion weather disasters. “Historic flooding” occurred in 2019, which caused $10.8 billion in damages. As of July 8 of this year, “there have been 10 weather/climate disaster events with losses exceeding $1 billion each to affect the United States.” The annual average for the last five years is 13.8 events.

Christina Muhammad commented on the financial side and the job loss the western wildfires are causing. “Imagine all the jobs that have shut down. You shut down for Covid, and now you’re shutting down for real,” she said. “You got 17,000 firefighters that are there in California right now. So, you gotta think about all the different cities that had to send those firefighters out. Then you look at it, you got 3.3 million acres that have been burned up; 25 fatalities; 4,200 structures that have been destroyed. Think about all of that. That’s physical, but then it’s mental.” By September 20, there were 27 major wildfires in California, nearly 19,000 firefighters on the front lines, 26 fatalities and 6,100 structures destroyed, according to a summary by FireCal.

She and her team have assisted community residents in different areas in the aftermath of weather-related disasters and emergencies.

It is important that members of the Nation of Islam receive training as first responders and in areas of disaster preparedness so they can assist communities as these phenomena occur, explained Christina Muhammad.

The NOAA attributes some of the extreme disasters to climate change. Student Minister Abdul Haleem Muhammad agreed that it is climate change, but he asked how is the climate being created?

“The Honorable Elijah Muhammad said that God said America was number one on His list for destruction. His mouth was not made to speak idle words, and he said there will be four great judgments of America: rain, hail, snow and earthquakes,” he said.

He advises people to keep their eyes on the skies. “Get organized. Have a plan for your family, your job or business, your school, your household, your neighborhood. All of us should be planning to either shelter in place or evacuate the calamity,” he said.

In a lecture delivered in July 2019, titled, “The Man Jesus and How Not To Fall Into Idolatry,” Min. Farrakhan talked about the climate and natural disasters.

“America is surrounded with the Judgement of God. Climate control is very important in the context of war but there’s no space on this earth that has received as much calamity from weather as the United States of America. Water glaciers are melting. Some of these glaciers are the size of some small states,” he said.

“The Honorable Elijah Muhammad said the Holy Qur’an bears witness that Allah (God) would curtail this place on both sides. He said he wouldn’t buy anything on either coast, because the coasts are going to be flooded,” the Minister continued. “You heard it first here. Now watch the news bear witness that a Messenger of God, a man taught by God, is telling you things that are and things to come.”