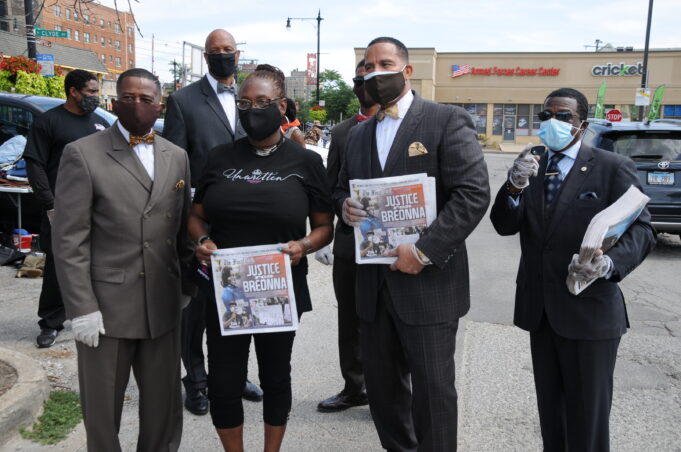 The Fruit of Islam (FOI), the men who belong to the Nation of Islam returned to the streets with high spirits, good news and truth in the form of The Final Call Newspaper.

Their presence in the streets has been a relief since Covid-19 has caused many people around the country to experience anxiety and in some cases despair. The FOI have made adjustments maintaining safe distances and wearing masks while passing out the award-winning publication. It is also offered through subscriptions, direct door-to-door sales and digital.

“Our going [back] out didn’t just happen because of a whim.… a feeling,” said Brother Abdul Azziz Muhammad, student assistant Supreme Captain. “It happened because the Supreme Captain really desired to make sure that it was safe for us to come out.”

The FOI brotherhood which spans across multiple continents and eight regions of the world was called back in to shelter in place by the Student Supreme Captain Mustapha Farrakhan and the NOI Executive Council with the blessing of the Honorable Minister Louis Farrakhan, after the start of the coronavirus that has decimated populations across the globe.

“First off, we’re soldiers in the army of the Lord,” continued Student Captain Abdul Azziz Muhammad. “When we know that the Minister (Farrakhan) is in touch with Allah and the Christ, we look for his word, because we want to operate with his mind.”

The public absence was in keeping with the nature and mitigation requirements of the pandemic that has infected over 25 million people worldwide and over six million people in the U.S. according to World Health Organization numbers.

When the decision was made to return to the streets, preparation, careful planning and precise instructions concerning the proper mindset, spirit and necessary personal protective equipment were given to men.

Upon their return, the people expressed how much they missed and love the Muslims.

“By Allah’s (God’s) Grace, the FOI are mighty because of their love, commitment and work. They risk their lives to bring truth to our people with The Final Call newspaper,” said Final Call editor Naba’a Muhammad. “They are well-prepared with proper protection and we pray for their safety and success.”

The FOI are known as messengers under God’s apostle to carry the good news that God Himself has intervened and is offering a way out of the condition the people find themselves in.

Talib Muhammad of Mosque No. 1 in Detroit was pleased to be a part of returning to the community. “I wouldn’t say it was overdue; I would say it was on time.”