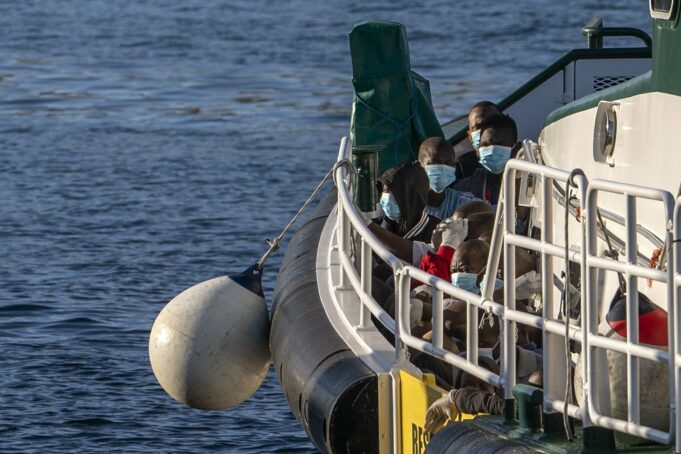 FUERTEVENTURA, Spain—The only person who wasn’t crying on the boat was two-year-old Noura.

Noura’s mother, Hawa Diabaté, was fleeing her native Ivory Coast to what she believed was continental Europe. Unlike the 60 adults on board, only Noura was oblivious to the risks of crossing the open waters of the Atlantic Ocean in an overcrowded rubber dinghy.

As the waves quickly got bigger and people more nervous, Noura told her mother, “Be quiet, mama! Boza, mama! Boza!” Ms. Diabaté recalled. The expression is used by sub-Saharan migrants to celebrate a successful crossing.

After several hours in the ocean, it was finally “Boza.” Spain’s Maritime Rescue Service brought them to safety on one of the Canary Islands.

Migrants and asylum-seekers are increasingly crossing a treacherous part of the Atlantic Ocean to reach the Canary Islands, a Spanish archipelago near West Africa, in what has become one of the most dangerous routes to European territory. Noura and her mother are among about 4,000 people to have survived the perilous journey this year.

But many never make it. More than 250 people are known to have died or gone missing so far this year according to the International Organization for Migration. That’s already more than the number of people who perished trying to cross the Western Mediterranean in all of last year. In the week that The Associated Press spent in the Canary Islands to report this story, at least 20 bodies were recovered.

The increase in traffic to the Canaries comes after the European Union funded Morocco in 2019 to stop migrants from reaching southern Spain via the Mediterranean Sea. While arrivals to mainland Spain decreased by 50 percent compared to the same period last year, landings in the Canary Islands have increased by 550 percent. In August alone there were more than 850 arrivals by sea to the Canaries, according to an AP tally of numbers released by Spain’s Interior Ministry and reports by local media and NGOs.

Arrivals this year are still low compared to the 30,000 migrants who reached the islands in 2006. But they are at their highest in over a decade since Spain stemmed the flow of sea arrivals to just a few hundred a year through deals with West African countries.

The striking shift in migration back to the Canaries has raised alarms at the highest levels of the Spanish government. Spain’s Prime Minister Pedro Sánchez’s first trip abroad following the pandemic lockdown was to Mauritania, one of the main departure points. Most recently, the interior ministry announced a donation of 1.5 million euros in border surveillance equipment to six West African countries.

But human rights organizations say those arriving to Spanish shores are only a fraction of those departing.

“We are only seeing the tip of the iceberg,” said Sophie Muller, the United Nations High Commissioners for Refugees’ representative in Spain, who recently visited the archipelago. “They are taking impossible routes.”

It can take one to 10 days to reach the Spanish islands, with the closest departure point being in Tarfaya, Morocco (62 miles) and the furthest recorded this year in Barra, in The Gambia (more than 1,000 miles). It is common for migrants to run out of food, water and fuel after only a few days.

On August 19, 15 lifeless Malians were spotted inside a wooden boat by a Spanish plane 148km, 92 miles from the island of Gran Canaria and towed back to port. At nightfall, workers pulled the bloated corpses, one by one, out of the boat with a crane. The next day, police collected what was left behind as evidence: a wallet, a dozen cell phones, windbreakers and waterproof boots.

Less than 24 hours later, another migrant boat was rescued and brought to the island with 12 people and four dead, as the AP watched. The survivors had witnessed their comrades die along the way.

“They almost didn’t speak,” said José Antonio Rodríguez, who heads the regional Red Cross immediate response teams. “They were in a state of shock.”

One of the 12 rescued died before he could reach a hospital.

“There’s been a change in profile,” said Ms. Muller, the UNHCR representative in Spain. “We see more arrivals from the Sahel, from the Ivory Coast, more women, more children, more profiles that would be in need of international protection.”

The Interior Ministry of Spain denied requests by the Associated Press to share nationalities of recent arrivals to the Canary Islands, claiming the information could impact international relations with the countries of origin. But UNHCR estimates that around 35 percent of those arriving by boat come from Mali—the nation at war with Islamic extremists where a coup d’état recently toppled president Ibrahim Boubacar Keita. Around 20 percent of arrivals are women and 12 percent under 18, Ms. Muller said.

Kassim Diallo fled Mali after his father was killed in an extremist attack targeting an army base near his village in Sokolo in late January.

On Feb. 29, the 21-year-old got aboard a rubber boat in Laayoune in the Western Sahara with 35 other men, women and children. After nearly 20 hours in the water, his group was rescued and brought to the island of Fuerteventura.

“It is not normal. A human being shouldn’t do this. But how else can we do it?” said Mr. Diallo.

Like most of those who crossed by boat to the archipelago this year, Mr. Diallo has been stuck on the islands for months. Although forced return flights to Mauritania have been halted by the pandemic, the Spanish government has also forbidden newly arrived migrants from going to the mainland, even after travel restrictions were lifted for nationals and tourists. Only a few groups, mainly women and children, have been transferred on an ad-hoc basis via the Red Cross.

“Blocking people from leaving the Canaries has turned the islands into an open-air prison,” said Txema Santana, who represents the local office of the Spanish Commission to Help Refugees.

Until Mr. Diallo is granted asylum, which he has yet to apply for, he cannot work. He would love to learn Spanish, but there aren’t classes available to him.

The Canary Islands were meant to be just a stepping-stone to reach “The Big Spain” or continue to France where he can at least understand the language. But for now, he remains closer to Africa than to continental Europe.

“On a European level, it should be like managing a land border,” said Ángel Manuel Hernández, an evangelical pastor whose church is the main shelter for rescued migrants on Fuerteventura. “Borders are meant to be areas of transit, not areas to stay.”

“We don’t have the resources or the capacity to care for all these people with the dignity and the respect that these human beings deserve,” he said.

As shelters fill up, recently arrived migrants sometimes have nowhere to sleep. More than 100 people, including women and children are currently sleeping on the floor in makeshift tents on the docks of Arguineguin, on the island of Gran Canaria, following disembarkation. The coronavirus only adds another layer of difficulty as passengers on migrant boats must be tested and quarantined as a group if any of them are found to be positive.

In response to questions emailed by the AP, Spain’s government delegate in the Canary Islands Anselmo Pestana wrote: “Our effort has to focus not so much on thinking “how we distribute” immigrants, but on working at origin, so that we can prevent anyone from risking their life.”

Spain’s government has yet to reveal where it will place hundreds of migrants now housed in local schools when classes resume in September.

Ironically, half of the islands’ hotels and resorts are closed due to the effects of the pandemic. Across the island, tourists sunbathe in the largely empty resorts as exhausted Spanish maritime rescuers continue their everyday search in the Atlantic for migrant boats in distress, hoping to reach survivors before it’s too late.

Ms. Diabaté, the Ivorian mother, hopes one of them will be her eight-year-old son Moussa. They got separated back in Morocco as smugglers rushed them to the beach and onto the rubber boat that would take them to the Canary Islands.

“I’ve been crying every day from the moment I got on that boat,” she said. (AP)