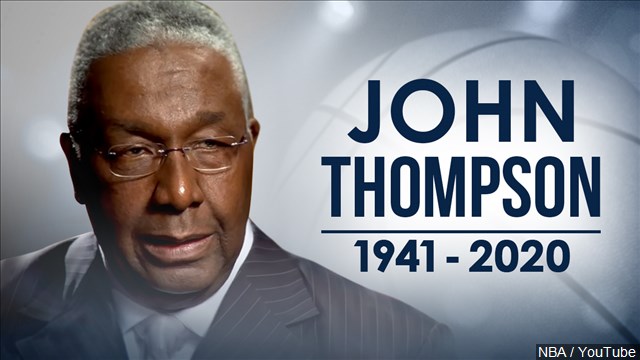 There are sports heroes who made history for their athletic skills, gifts and talents and there are makers of these greats who developed them. Such a one is legendary coach John Thompson, Jr., who led the Georgetown Hoyas from 1972-1999.

The iconic figure is credited with developing some of the greatest basketball players to grace the hardwood and was as proficient in developing them as human beings off the court. Coach Thompson died August 30, at 78 years old, days shy of his 79th birth date on Sept. 2.

“We are heartbroken to share the news of the passing of our father, John Thompson, Jr.,” said an official family statement.

“Our father was an inspiration to many and devoted his life to developing young people not simply on, but most importantly, off the basketball court.”

The Thompson family said in their statement that the iconic figure is revered as a historic shepherd of the sport, dedicated to the welfare of his community above all else. However, they said, his greatest legacy remains as a father, grandfather, uncle, and friend.

“More than a coach, he was our foundation. More than a legend, he was the voice in our ear every day.”

At John Carroll Catholic high school, John Thompson, Jr., led the team to 55 consecutive victories and two city titles. Moving on to Providence College he gained a degree in economics and was a top basketball prospect nationally.

Mr. Thompson led a long and accomplished career. Before coaching college ball, he played on two Boston Celtic World Championship teams where he was used as a backup to hall of famer Bill Russell.

Eventually taking a coaching position at Georgetown, he led the Hoyas for 27 years and brought the team from a losing underdog status to a “powerhouse” known for its first-rate players.

In his Georgetown tenure he gained 596 wins. The team advanced to the NCAA Championship game three times (1982, 1984, 1985) in four years, capturing the national title in 1984. His Hoyas were one of the original teams of the newly formed Big East Conference in 1989. He led Georgetown to six Big East Tournament titles, seven regular season titles, and six Big East Player of the Year awards. But for Coach Thompson basketball was only his lane, his aim was development of people.

“He was a man of great discipline and great principle … he was a teacher of young men, he molded young men and education was a big part of what he was about,” said Reggie Williams, a Charlotte, N.C.-based sports consultant.

Mr. Thompson influenced his players to make acquiring their degrees a priority over their sports prowess. Ninety-seven percent of his four-year players graduated. “You don’t get those numbers in the sports world,” said Mr. Williams.

Mr. Thompson knew the importance of academics in the equation and the numbers of players who will make it to the NBA as a career. “It was always bigger than ball because ball is going to end for everybody,” Mr. Williams said.

Mr. Williams told The Final Call that along with Mr. Thompson’s academic success, he influenced relationships with Nike and ESPN that propelled the “economic explosion” that has taken place in sports over the last several decades.

“John Thompson, Jr., altered the history of college basketball through both his on-court success and his passionate advocacy for equality for all coaches and student-athletes,” said Craig Robinson, executive director of the National Association of Basketball Coaches. Mr. Thompson served on the association’s board of directors and was a past president.

Mr. Thompson’s fight was that players need coaches who see them deeper as human beings and who makes sure they develop as young men to be effective in life.

He was a stand-up leader and unequivocal voice against what he deemed as injustices in the college sports arena and was responsible for Black talent playing for the Jesuit all-White Georgetown University.

In his 6-foot 10-inch frame, Mr. Thompson was a towering figure who unabashedly protected his players from any interference, no matter whom or what.

“Big John” as he was also called, with his signature white towel slung over his shoulder, became a patriarch to the Hoyas even after parting with coaching in 1999. He was inducted into the Naismith Memorial Basketball Hall of Fame the same year.

“I’ll probably be remembered for all the things that kept me out of the Hall of Fame, ironically, more than for the things that got me into it,” Mr. Thompson said the day he was elected to the Hall.

Mr. Thompson was not a silent observer in the face of injustices despite the sports world painstakingly insulating itself from taking principled stands. Before there was former NBA player Kenny Smith, a Black sport commentator who walked off the set of  TNT’s Inside the NBA in solidarity with professional basketball players boycotting games over the police shooting of Jacob Blake in Kenosha, Wisconsin, there was Mr. Thompson.

In January 1989, he courageously walked out of a game against Boston College to protest the NCAA’s Proposition 48, a regulation concerning minimum high school grades and standardized test scores for student-athletes which he argued discriminated against poor and Black athletes. “Big Ace” as he called himself according to his family statement, stood at a time when it was still relatively unpopular to stand-up in or against the sports world.

Kentucky coach John Calipari recalled in a tweet. “He was ahead of his time by speaking truth to power when it was hard to do.”

In an August 31 tweet Mr. Calipari complimented the Hall of Fame coach as a “life changer for so many,” and whose players were a “who’s who” of college basketball. Greats like Allen Iverson, Patrick Ewing, Alonzo Mourning, and Dikembe Mutombo were only a few he directly molded.  He had 26 players drafted by the NBA.

“Georgetown University, the sport of basketball and the world has lost someone who I consider to be a father figure, confidant and role model,” said Patrick Ewing, Georgetown head men’s basketball coach and former New York Knick in a statement.

Allen Iverson remembered the man who and believed in him when others gave-up on him.

“I would give anything just for one more phone call from you only to hear you say, ‘Hey MF,’ then we would talk about everything except basketball,” wrote Mr. Iverson in a tweet. He added, “I will always see your face in my mind, hoping that I made you proud,” ending with,“Your Prodigal Son.”

In his tweet, Mr. Iverson thanked his father figure and coach for saving his life. Coach Thompson gave him a break to play for the Georgetown Hoyas after Mr. Iverson was unrecruited by major schools around the country for football and basketball over a conviction—now overturned—for a bowling alley fight in high school.

“My mom went to Georgetown and begged him to give me a chance. And he did,” Mr. Iverson said during his own induction ceremony in the Naismith Memorial Basketball Hall of Fame.

Coach Thompson is being remembered as a leader and influencer who believed in achieving and passing it forward.
In 2000 Mr. Thompson established The John Thompson Charitable Foundation to help improve the quality of life for underserved children. He also was a consultant, spokesman and board member to Nike and served as coach emeritus and presidential consultant for urban affairs at Georgetown.

“He was my role model,” sports agent, Gary Moore, president and founder of Moore Management and Entertainment, told The Final Call.

“I watched him from a distance for many years and patterned the way that I lived my life as a result of what I saw.  It is because of him that I wanted to be a life coach and I wanted to be the best coach that I could be,” he said.

He was a man who walked his talk and demanded discipline and a process that nurtured excellence.

John Thompson, Jr., is survived by his three children John III, Ronny, and Tiffany and his five grandchildren, said Georgetown University website. At presstime, no funeral or memorial information had been announced.