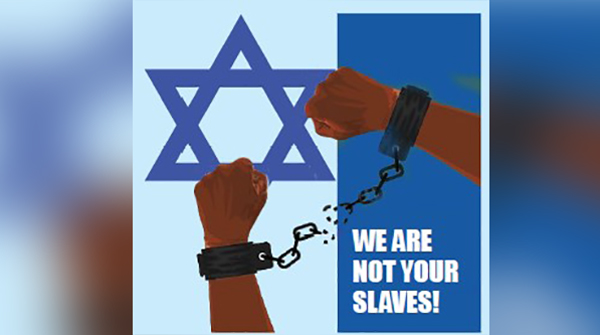 “Only one movement (The Black Muslims), though looked upon by disfavor by the major Black civil rights groups remains consequential, strong, cohesive and influential. …”

On August 24, 2020, this same American Jewish Committee trotted out writers Dov Wilker and Holly Huffnagle to encourage the Black community to “unfollow Farrakhan” or suffer the consequences. The article is written to point out the persecution of high-profile Blacks who have been the victims of Jewish campaigns to injure them professionally because of their love and support for the Honorable Minister Louis Farrakhan. Wilker and Huffnagle wax “godfather-esque” in their “make them an offer they can’t refuse” type piece that is purposed to stoke fear and to intimidate the followers and supporters of Minister Farrakhan.

According to Wilker and Huffnagle:

“Efforts to combat anti-Semitism online seem to fire up Farrakhan’s base. Some celebrities and community leaders heap praise upon Farrakhan. …. But it’s their careers, reputations and pursuits of justice that suffer when they defend Farrakhan.”

What Wilker and Huffnagle make clear is that Blacks who support strong Black leaders that the Jewish community does not approve of, namely Minister Farrakhan, will continue to be punished with career sabotage and industry black-balling. And this punishment of Black celebrities and entertainers must be understood as a public robbing of their constitutional right to the freedom of speech, expression and religious belief. It is clear that when it comes to the Black community, the AJC’s professed liberal ideals and virtues don’t apply.

For those of us in the Nation of Islam, there is no way for us to read the Wilker and Huffnagle piece and not view it as a veiled threat.

The history of the Nation of Islam and its conflict with Jewish organizations documents that organizations like the American Jewish Committee and the Anti-Defamation League stop at nothing to destroy our ability to earn a living and promote our religion. Moreover, while Wilker and Huffnagle attempt to describe what has happened to Nick Cannon, Tamika Mallory, Student Minister Rodney Muhammad and others as a naturally occurring result of defending Minister Farrakhan, the truth is that it is the result of a well-orchestrated campaign to crucify strong Black leadership; leadership that teaches Black people to do for ourselves what Jews have done for themselves through intra-group unity and cooperative economics.

In The Secret Relationship Between Blacks and Jews Volume 2 we learned of the efforts of the Anti-Defamation League of B’nai B’rith and the American Jewish Committee to destroy the Nation of Islam. An illuminating passage states:

“In 1942: A secret Anti-Defamation League of B’nai B’rith file entitled “Temple of Islam Infiltration” states that a “Negro employed by us” proved “quite instrumental” in an FBI raid on the Chicago mosque resulting in 82 arrests.”

We also learned in this monumental and epic work:

The ADL and The AJC spied on and collaborated with law enforcement to sabotage the Nation of Islam. They did this despite the fact that they privately admitted that the Nation of Islam is NOT ANTI-SEMITIC. The Secret Relationship continues by making this eye-opening revelation:

“Arnold Forster of the ADL admitted that we have no documentable evidence of anti-Semitism on the part of the Temple of Islam movement or Elijah Muhammad. Nathan Edelstein of the AJC wrote that ‘We doubt whether the bulk of its followers are presently committed to anti-Semitism.”

“The United States Government Tuesday began moving against the anti-Semitic Negro extremist group known as the “Black Muslims,” firing a dozen from Federal jobs. The Justice Department recently revealed to the Jewish War Veterans that an active investigation of the fanatic activities of both the Black Muslims and the American Nazi Party.”

In the early 1990s the ADL used its influence in the United States federal government once again to injure members of the Nation of Islam financially. It worked to eliminate Nation of Islam members as a private security presence in federal apartments. Prior to the arrival of NOI Security, these apartment communities had been the inspiration for movies like New Jack City due to their reputation for being home to open air illegal drug markets and the criminal activity that resulted from them. Once NOI Security established a presence in these communities; they became veritable oases of peace and safety for the poor and struggling people who lived there. The heroic work in crime ridden areas is well-documented. Former Housing and Urban Development chairman Henry Cisneros told the Congress:

“We have conducted over 1,000 interviews of residents and management, and they illustrate that these security guards have been effective in transforming many drug-ridden properties into places which are now safe and peaceful. …. Almost all the residents interviewed lauded the jobs that the reviewed firms have done and asked that the contracts not be terminated.”

The persecution of the Nation of Islam by Jewish groups throughout our history is what Wilker and Huffnagle seek to remind us of. Wilker and Huffnagle are of the same playbook as Steven Freeman of the ADL who promised in 1994 punish any and all celebrities, organizations and universities who give a platform to Minister Farrakhan and the Nation of Islam.

And despite the carefully worded threat that if we continue to follow Farrakhan, we will “take the fall for echoing Farrakhan’s message,” the Black community is beginning to close ranks around the Honorable Minister Louis Farrakhan. In their article they note that Nick Cannon has not repudiated Minister Farrakhan, though he has apologized for words he spoke that offended these Jewish organizations. And recently Black Twitter has sided with the Honorable Minister Louis Farrakhan, by calling out the Wiesenthal Center and ADL for being silent on the killing of Breonna Taylor but conspiring to get Nick Cannon fired from Viacom for merely speaking words. In a “wisdom of the crowd” moment their lament is “how could a man suffer more from the words that he spoke than killers suffer from the actions that they took that resulted in the taking of the life of an innocent woman?”

Wilker and Huffnagle should go back and study the scriptures, especially the Torah. For Minister Farrakhan could not have withstood the powerful opposition of the Jewish community all these years if he was not a man that Allah (God) is protecting. And the same protection that Allah (God) has given to Minister Farrakhan, he extends to all who defend and help him in his messianic work.

For most surely Wilker and Huffnagle’s article sounds like the sentiments expressed by Pharaoh, whom the Holy Qur’an records as threatening to punish his “enchanters” for believing in the God of Moses and Aaron. Surah 7:123-124 states:

“Pharaoh said: You believe in Him before I give you permission! … I shall certainly cut off your hands and your feet on opposites sides, then I shall crucify you all together!”

And it is the Nation of Islam and its supporters who are resolved today in the modern era like the “enchanters” were resolved in the Holy Qur’an, to be unafraid of Pharaoh’s threats and said:

“There is no hurt (in what you threaten us with). For surely to our (true and everlasting) Lord we are bound to return.”­—Holy Qur’an 26:50

Demetric Muhammad, a Nation of Islam student minister, is based in Memphis and a member of the NOI Research Group. Read more from him at www.researchminister.com.