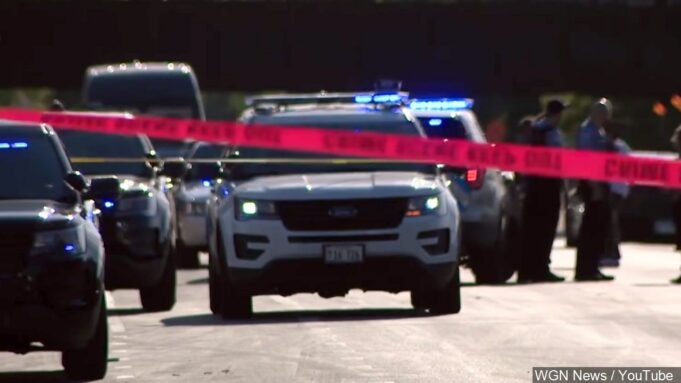 CHICAGO—As if tensions couldn’t get any worse between the public and police, the FBI recently issued a warning to Chicago police that 36 gangs had allegedly formed a pact to target police “in order to garner national media attention.”

The report issued by FBI officials claimed gangs “have been actively searching for, and filming, police officers in performance of their official duties” and plan to “shoot on-sight any cop that has a weapon drawn on any subject in public.”

The source and reliability of the report remains undetermined, but Chicago police remain on high alert. On Aug. 31 Chicago Police Superintendent David Brown told local news that there has been evidence of people “seeking to do harm to cops” and that the “lawlessness” needs to stop.

Yet there has been no evidence released linking police shootings of Chicago cops to the alleged pact.  Although not commenting directly on the FBI alert, Supt. Brown said during a press conference the danger to police officers is real and increasing.

“I think it’s bigger than a suggestion,” Supt. Brown said. “I think 51 officers being shot at or shot in one year, I think that quadruples any previous year in Chicago’s history. So, I think it’s more than a suggestion that people are seeking to do harm to cops,” he said, according to ABC 7 Chicago.

There is skepticism among some that this supposed “gang pact” is legitimate, particularly since it is coming from law enforcement.

Community activist Ja’Mal Green believes the FBI’s report could be misleading and an attempt to justify police shootings.  “We had 2,800 people that have been shot in Chicago this year so people have been a target,” he told The Final Call.

“So, I think that this whole thing people, charging police officers is just a way to get police officers to get hyper enough to—whatever their situation—they’ll shoot somebody,” he said.

“The police officers shoot somebody or does something to somebody because they claimed they heard from this story, so you’ll have more police settlements, you’ll have more cases of police brutality,” continued the former mayoral candidate. “We’re not going in that direction to be able to build a relationship with police and that’s why we have to reimagine police altogether.”

The title of the FBI memo is “Pact Made by People Nation Gang Factions to ‘Shoot On-Site’ Any Police Officer with a Weapon Drawn.” According to street activists, the report is a classic false flag operation moving the threat assessment against police directly to targeting Black youth. The memo does, however, come with a disclaimer. The FBI’s “Potential Activity Alert,” according to news sources, is from “a contact whose reporting is limited and whose reliability cannot be determined.”

The alert—which mentions around 36 gangs who are reportedly members of People Nation, an alliance of street organizations including the Latin Kings and Vice Lords— says “members of these gang factions have been actively searching for, and filming, police officers in the performance of their official duties,” according to local news outlet ABC 7 Chicago which broke the story.

“This is false information,” Tio Hardiman, executive director of Violence Protectors told The Final Call. “The street organizations in Chicago are too busy fighting one another. If they came together to form a pact to kill police, then they could come together to form a pact to stop killing each other,” said Mr. Hardiman, a long-time gang interventionist, activist and political candidate.

“Currently, Chicago has over 500 homicides; we have surpassed the number of homicides for 2019. I think it is a smokescreen to create more tension between the police and young, Black men. We are doing our best to work on the healing process here in Chicago. There is no room for deception and the distribution of misinformation,” he added.

Special Agent Siobhan Johnson, media coordinator for the FBI’s Chicago Field Office, informed The Final Call via email that the bureau “has no comment on this matter” but that the FBI’s mission “has always been to protect the American people and uphold the Constitution of the United States.”

“In support of that mission, we regularly share critically important intelligence regarding violent crime and officer safety with our federal, state, and local law enforcement partners,” added Mr. Johnson.

Mr. Green also warned that youth are already short-tempered with law enforcement as it is. “This is not the time to be playing with conspiracy, there’s no evidence that police officers have been shot and killed because of this report. … It’s just going to further the divide,” he cautioned.

“I just don’t know if it’s going to be all true that they can organize at that level with the numbers of gang members, street organizations that we have today,” she continued. With the numbers of killings and shootings in the city, Ms. Porter agrees that something does need to happen.

“I do know that there are organizations on the ground such as New Era Chicago, such as the FOI (Fruit of Islam, the men of the Nation of Islam)—they get together on Mondays and they kind of patrol around different areas and communities. I do think we have to take drastic measures for these drastic times because we’re seeing a pandemic on top of a pandemic,” said Ms. Porter.

She added that if police respond with violence, it would only worsen the relationship Black and minority communities have with police.

Reports indicate some crime is decreasing, but most Americans don’t believe it. According to the FBI’s own numbers, the violent crime rate fell 51 percent between 1993 and 2018. According to Bureau of Justice Statistics data, the rate dropped 71 percent during that span. Like violent crime rates, U.S. property crime rate today is far below its peak level. FBI data shows that the rate fell by 54 percent between 1993 and 2018, while the Bureau of Justice Statistics reports a decline of 69 percent. Property crime includes burglary, theft, and motor vehicle theft, and it is generally far more common than violent crime.

What has increased, however, is the murder rate, especially in large urban areas. Murder in 25 metropolitan cities is up 16.1 percent in relation to last year. Chicago has faced a dramatic spike in violent crime this year, with 505 murders and 2,152 shootings in the first eight months of 2020. Two cops were shot in Chicago the last weekend in August while carrying out a traffic stop. According to news sources, there is no indication that the pair who were shot were part of any gang assassination plot, as described in the FBI alert.

“The police need to do their job and reduce gun violence to the best of their ability, and the FBI should step up to the plate and continue to try to work to intercept the illegal gun trade and to stop the flow of illegal drugs coming into cities like Chicago, New York and Philly,” he added.

When it comes to security, the U.S. has the most sophisticated systems in the world, noted veteran community activist Wallace “Gator” Bradley of United for Peace. “Their ability to infiltrate Black organizations is historical. If the memo’s information were true, they would have locked up the individuals in leadership immediately. Look how they rolled on so-called Muslim terrorists,” Mr. Bradley told The Final Call.

“I don’t think any African American organization can hide a secret like that about going to kill some police. We have a history of them putting manure like this out on us, and we should not feed into it,” he added.

“They can’t pinpoint where this information is coming from. They can’t verify if the information is verifiable. The important question to ask is, why would someone put out a memo under the FBI tag that even they don’t believe reliable? We can’t feed off into that lunacy,” Mr. Bradley concluded, before adding “there is too much work to be done.”