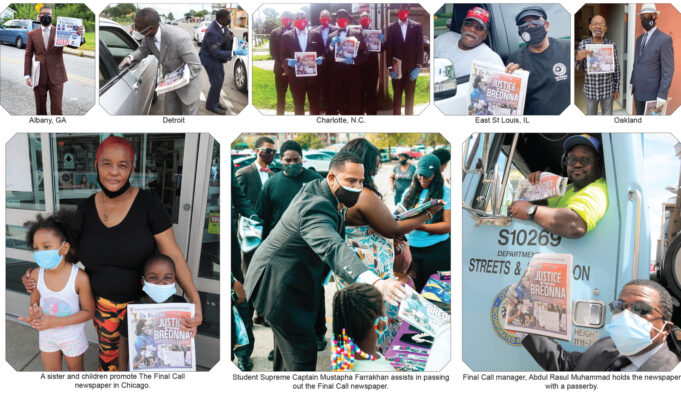 “Come, my people, enter thou into thy chambers, and shut thy doors about thee: hide thyself as it were for a little moment, until the indignation be overpass. For, behold, the LORD cometh out of his place to punish the inhabitants of the earth for their iniquity: the earth also shall disclose her blood, and shall no more cover her slain.”— Isaiah 26:20 (Bible)

From the North, South, East and West of America the Fruit of Islam (FOI), the men who belong to the Nation of Islam (NOI) have enthusiastically returned to the streets carrying the guidance, good news, and truth in the form of The Final Call Newspaper after an absence of 20 weeks, since the beginning of the coronavirus pandemic.

Since Covid-19, the award-winning publication dedicated to the resurrection of the Black man and woman of America and the world was primarily made available through its digital edition. Now, through the FOI, both the digital and hard copy paper editions will be offered through subscriptions and direct door-to-door sales.

“Our going [back]  out didn’t just happen because of a whim… a feeling; it happened because the Supreme Captain really desired to make sure that it was safe for us to come out,“ said Abdul Aziz Muhammad, student assistant Supreme Captain.

The FOI whose brotherhood spans multiple continents and eight regions of the world were called back in to shelter in place by the Student Supreme Captain Mustapha Farrakhan and the NOI Executive Council with the blessing of the Honorable Minister Louis Farrakhan, after the start of the highly contagious coronavirus that has decimated populations across the globe.

“First off, we’re soldiers in the army of the Lord,” Student Capt. Abdul Aziz Muhammad continued. “When we know that the Minister (Farrakhan) is in touch with Allah and the Christ, we look for his word, because we want to operate with his mind.”

During the time the FOI was sheltered in place under Minister Farrakhan’s instructions and wise guidance, there were protests and demonstrations in the streets against racial and police violence and killings of several Black people across the country. Some members of the public misread the absence of the NOI, although the group has been in the front seat of Black upliftment for 90 years.

Student East Coast Regional Captain Majied Muhammad said some expressed concern the return might potentially be met with a negative response from the community over the absence. However, reports he received from within his region reflected this was not the case. It was “completely the opposite,” said Student Capt. Majied Muhammad. “Because it is the opposite, I believe that it is what has got the spirit of the soldiers so high,” he added.

Student Capt. Majied Muhammad said the spirit of the soldiers throughout the Eastern Region was wrought with positive stories of how the community responded back to the brothers. “We moving ahead,” he said.

The public absence was in keeping with the nature and mitigation requirements of the pandemic that has infected over 25 million people worldwide and over six million people in the U.S. according to World Health Organization numbers.

After much consideration for safety, now is the time to return to the streets, said Student Capt. Abdul Aziz Muhammad, “understanding our life and our death is all for Allah (God).”

“So, the men are not afraid to go out and face it,” he said. “In fact, we have to temper them, because we are going out cautiously, but courageously.”

When the decision was made to return to the streets, preparation, careful planning, and precise instructions concerning the proper mindset, spirit and necessary personal protective equipment were given to the men.  Among the FOI there is high enthusiasm about resuming their work of propagation and spreading truth.

In Chicago over 100 brothers eager to meet their people reported to the NOI National Center and headquarters, Mosque Maryam, for instructions before being dispatched into the community.

“I was very honored to be a part of those men,” Final Call General Manager, Abdul Rasul Muhammad told The Final Call.

“When we got out there in the streets among our people, it was as though it was a homecoming of the most magnificent type,” said Abdul Rasul Muhammad who is also a student minister.

The people expressed how much they loved and missed the Muslims and were honored and happy to see the FOI among them even in the trying circumstance of the pandemic, he added. The FOI, as redeemers and messengers of good news served the people with the spirit of joy, honor, and respect, said Abdul Rasul Muhammad.

“By Allah’s (God’s) Grace, the #FOI are mighty because of their love, commitment, work. They risk their lives to bring truth to our people with The Final Call Newspaper. They are well-prepared with proper protection and we pray for their safety, success,” said Final Call editor Naba’a Muhammad.

For the NOI West Coast Regional Minister Abdul Malik Sayyid Muhammad, headquartered in Los Angeles, going back out is a blessing and he believes the Nation of Islam will experience growth and unlimited progress.

He told The Final Call, after Allah (God) had us in the chambers, keeping  us out of harm’s way, and looking introspectively, “we are anxious to get to our people and they are anxiously waiting to see the FOI.”

“We will now sell more, do more, and I believe the mosques in all of the major cities … we’re going to see unlimited progress of people reaching for, and accepting the teachings of the Honorable Elijah Muhammad,” said Student Min. Abdul Malik Sayyid Muhammad.

The West Coast representative sees the hand of God opening the hearts of the people through the racism and recent adverse events affecting them. “They’re taking a whipping … and when we now come back out…I believe Allah and His angels will make us look like saviours’,” he said.

Sentiment from different regions throughout the country expressed a readiness for returning to duty.

“This is our life; soldiering,” said Aaron P. Muhammad, the Mid-Atlantic student regional captain based in Washington, D.C. He said being under quarantine and working on himself, mentally, spiritually, and physically gave him a new outlook for the mission. To re-engage and to get the word of Allah (God) and His servants to the people in a dark hour is a blessing and mercy.  “The people are responding differently and more positively,” he observed after spending time back in the community.

In the Southwest, the FOI are in high spirit, although located in the U.S. Gulf region; where along with Covid-19, the region has been struck with back to back weather disasters. “We know the danger, we’re very aware of how real it is,” shared Steven Ishak Muhammad, Southwest student regional captain, based in Houston. “But, we’re not focused just on the danger, we’re focusing on the blessing…from the God who came for the people.”

Student Capt. Steven Ishak Muhammad explained that the move to return in the field is another opportunity to issue a final trumpet call to escape the active judgment of God prevailing in the world.  He pointed out how the FOI is the “moral conscious” as hopelessness, suicide, domestic violence, and crime is up nationwide. “The presence of the FOI, it could never be more needed than right now,” he reasoned.

There is excitement among the FOI as disciples of the Most Honorable Elijah Muhammad and Minister Farrakhan to resume the mission they accepted as their sole purpose—to deliver their people to God and the life He demands.

“We are very, very, very excited for the opportunity to adhere to our sole purpose,” said Hashim Hakim, of Jacksonville, Florida. who has been a top distributor of the Final Call over consecutive years.

“We’re going to focus on not only reaching the people…saving lives and bringing them to the lamb of God, but also focusing on our customer base,” said Hashim Hakim. He has done national training on effective distribution of the paper but is now focusing on how to build a sustained customer base versus random street sales.

Other FOI expressed going back in the community is timely with all things considered.  “I wouldn’t say it was over due, I would say it was on time,” said Talib Muhammad of Muhammad Mosque No. 1 in Detroit ,Michigan.

With the limitations of the pandemic, Talib Muhammad spent time during the quarantine walking  major streets near his home as a form of exercise and met many other residents who are interested in subscribing to The Final Call digital and paper editions. “People are ready, we’re certainly ready. Everything happens by Allah’s permission and I understand that now more than ever,” he said.

The FOI can be likened to the devotees who walked with the prophets and great worthies of the scriptures. Moses and Aaron had their followers, Jesus had his disciples, Prophet Muhammad had his companions and Elijah Muhammad and Louis Farrakhan have the FOI, committed to walk with them in the mission to reach their people with God’s guidance for the time. The FOI are men  who made a covenant with God to be vessels in the gathering of His people and their  field is the streets of America and capitols worldwide including Europe, Africa, Canada, the Caribbean, Central and South America. However, with the pestilence, the presence in the streets was halted for the safety of the men, their families and the wider public.

Among the people infected and close to one million worldwide who lost their lives to Covid-19—the illness caused by the Coronavirus—were several members of the Nation of Islam, including its East Coast Regional Representative and New York City Student Minister Abdul Hafeez Muhammad, who was 56 years old.

Minister Farrakhan, referred to the death of his Student Minister and those who died in the pestilence as martyrs during a pivotal address to the world on July 4 titled The Criterion.

“Abdul Hafeez Muhammad called this day into existence. Because if I had not prayed so fervently to Allah (God) to understand this Covid virus, we wouldn’t be here on the Fourth of July,” said Minister Farrakhan during his address.

“Brother Abdul Hafeez would be very pleased with us in the Eastern Region because that’s exactly what we have done… kept going in regard to the work.”

Minister Farrakhan also warned that the behavior of the people of the earth is a pestilence, and God sent a pestilence to answer the pestilence. It is the indignation of God that will not stop until the people repent and reform their ways and His Kingdom of righteousness, freedom, justice, and equality is established, and tyranny is eradicated.

The FOI are messengers under God’s apostle to carry the good news that God Himself has intervened and is offering a way out of the condition the people find themselves in.

The FOI are a special class of men, trained for duty first and foremost to Allah (God) and to understand self. The quarantine was preparation to be better and give better service to God, self, their family, and community.

For them returning to the streets is an opportunity to continue to bank blessings with God by working the salvation of His people.

“We get a second chance to go out as hard as we can. We have no excuses now—let’s just go after our people and put some money in the bank of Allah,” said Student Capt. Majied Muhammad.