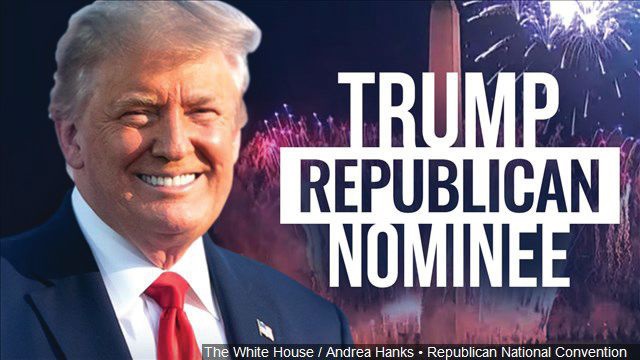 WASHINGTON—Donald J. Trump concluded his party’s re-nomination of him for the presidency at the White House, alternating from portrayals of him as kinder and gentler, and as a tough law-and-order enforcer whose reelection is the only thing standing between the suburban dream of peace and prosperity and bedlam.

The events, which may have violated the federal Hatch Act to Prevent Pernicious Political Activities—a 1939 law prohibiting federal civil service employees from engaging in some forms of political activity—used the presidential residence as a prop, military personnel as accomplices, a citizenship naturalization ceremony, and the pardons of two Black formerly incarcerated individuals to depict the president as a friend of immigrants and Black voters.

“With a heart full of gratitude and boundless optimism, I profoundly accept this nomination for president of the United States,” he said to a live audience Aug. 27 on the White House South Lawn, boasting of his first-term achievements and rejecting his critics who depict the country in a dystopian free-fall.

Without mentioning any Black victims of rampant police violence, he promoted law enforcement in the face of riots, protests and violence, even as the shooting of Jacob Blake in Kenosha, Wisconsin occurred on the eve of the convention’s first day. He promised to stand behind the police.

Mr. Trump said he had done more for the Black community than any president since Abraham Lincoln, claiming he has brought prosperity to inner cities, passed criminal justice reform and brought funding to Historically Black Colleges and Universities (HBCUs) as well.

And he praised his administration’s response to the coronavirus pandemic before the largely maskless and barely socially-distanced crowd, which wiped out more than five years of job growth in a matter of months. He said a Covid-19 vaccine will be available by the end of the year—a promise that’s been disputed in the medical community—even as more than 4,000 people died from the coronavirus during the span of the convention—indeed, more lives lost than in the 9/11 2001 attack on New York’s Twin Towers.

In essence, his strategy argued that only his reelection could save the country from the crises which have all gotten worse during his term in office. Former network news anchor Dan Rather called the event, “a campaign commercial in a house we own for a man most Americans didn’t vote for.”

“What you’re watching right now, if you’re watching, is monarchism, not democracy,” MSNBC host Joy Reid tweeted. “The White House—Our White House—has been turned into a prop, a set, and the palace of the Trump family. Trump’s niece @MaryLTrump (author of a new tell-all book—Too Much and Never Enough—about the president),” Ms. Reid continued, “has made it clear in my interviews with her that her uncle doesn’t care how many people die. He only cares about getting what he wants: in this case, to cling to power and avoid the consequences of becoming a civilian again, subject to prosecution.”

There have been major defections from the Trump camp by dozens and dozens of once-loyal Republicans. “At some point, you’ve got to turn that corner and realize that not everything is partisan, about your tribe or your team,” Michael Steele, former Republican National Committee Chairman and former lieutenant governor of Maryland told this writer in an interview. “The most important thing is about your community, your family, and your country. And so, with that in mind, it just made it an easy break for me to say, what matters to me is my country.”

Mr. Steele was the first Black person elected to statewide office in Maryland, between 2003-2007, and he was the first Black RNC chair, from 2009-2011. He signed on as a senior adviser to the Lincoln Project, a group of disaffected Republicans who have been running advertisements in key battleground states, attacking Mr. Trump. Mr. Trump, he said has fallen, “into preying upon fears and resentments with narcissism that nurtures only chaos and confusion.

“Leadership is needed now more than ever and I am proudly committed to resetting the course of our nation, standing once again for the future of my Party; and working with The Lincoln Project to help restore the purpose for sitting in that chair,” he said.

But Mr. Steele—as did several other prominent analysts—has a warning about the president’s ongoing support. “I think it’s a bad mistake for those out there who are actively pursuing change, and especially the Biden campaign to look at (opinion poll) numbers (showing Mr. Biden ahead) and think that they’re real. There’s a lot of undercounted votes. I know for a fact, because I know how the machine works,” Mr. Steele said.

“The GOP is very adept. They can mine that vote. They identified those voters who didn’t vote in 2016, not because they didn’t like Trump, but because they just want to engage, they hadn’t checked in. Now four years later, they like what they’ve heard from Trump. In some cases, (they like) the sort of nationalistic, populist, mantra that he’s put out there on the street and they buy into his ‘They’re coming into your neighborhoods’ rhetoric, and they’re mining those guys and gals to get up to vote.

“They’re now mining (those) who may not have voted four years ago. So, you cannot underestimate the ability to pull that kind of vote out of nowhere and have it show up at the polls. That’s a book that’s not going to get counted in polling right now. No one is talking to that voter. And so, you can be blindsided if you’re not totally prepared,” said Mr. Steele.

Mr. Trump is a president without a plan on how to govern, at the head of a party without a platform, that is appealing to a cult without a purpose. Their reelection plan is simple: stoking fear of Black people.

Critics of that scheme are plentiful. Ted Wheeler, the Democratic mayor of Portland, Oregon, where there have been months of nightly protests since the murder of George Floyd in Minneapolis, said it is President Donald Trump who “created the hate” in comments following a shooting at a protest in his city that left one person dead.

Mr. Wheeler’s message provoked a string of tweets from the president, who rebuked the mayor’s news conference plea to Trump to let him, as mayor, handle the unrest. The President promised to visit the city as well as Kenosha, Wisconsin, in spite of appeals from the local elected officials for Mr. Trump to stay away.

Wisconsin Gov. Tony Evers (D) is asking Mr. Trump to back out of a visit to the city of Kenosha planned for Sept. 1, saying in a letter that Mr. Trump’s presence “will only hinder our healing.”

The letter from the Wisconsin governor was sent as Trump announced he would travel to Kenosha, Wisconsin, to meet with law enforcement officials in the city days after a Black man, Jacob Blake, was shot in the back seven times by a White police officer and paralyzed. “I, along with other community leaders who have reached out, are concerned about what your presence will mean for Kenosha and our state,” Gov. Evers wrote in the two-page letter to Mr. Trump.

“I am concerned your presence will only delay our work to overcome division and move forward together,” he added. Mandela Barnes, the state’s Black lieutenant governor and John Antaramian, the Kenosha mayor also asked the president to stay away.

The Trump visits to racial hotspots helps bolster his message that he is cracking down on out of control Black protests, while at the same time, convention appearances by Black officials sought to paint the president as a friend of Black people.

“The other side of it is having a Herschel Walker and others that we’ve seen at the convention, there’s a direct effort to appeal to Black men. They very much would like to see a significant uptick in the number of Black men, to support and vote for Trump in November. In 2016, that number to the Black vote in total men and women was roughly 8 percent. So, if you know that you’re going to lose a significant number of the Black female vote, if you can turn up and turn out an unprecedented number of Black male voters, then if nothing else, you offset what you may lose,” said Mr. Steele.

“This is not about winning the Black vote,” Mr. Steele continued. “This is about margin, and the calculation is to reduce the margin in the Black community. So instead of losing the Black, 92 (percent) to 8 (percent), if you can, if you lose it 90 to 10, okay. That two percent makes a big difference in the total number, particularly in some battleground states, given everything else we know,” he said.