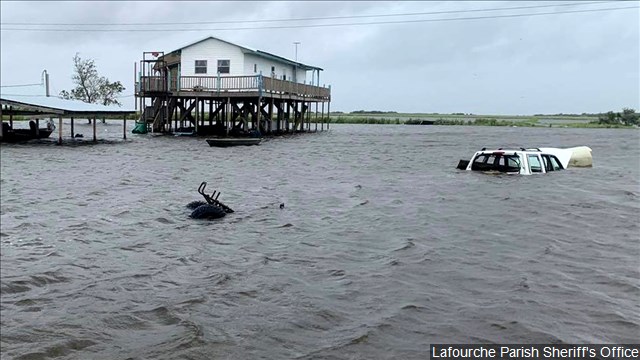 “Behold, I am against thee, O thou most proud, sayest the Lord God of hosts: for thy day is come, the time that I will visit thee.”

The United States gulf region was hit hard when Hurricane Laura slammed into the southern coastal border wrecking death and destruction on a nation still reeling from the Covid-19 pestilence and mass uncertainty.

Laura touched down in Louisiana exactly 15 years after Hurricane Katrina killed and displaced thousands and ravaged New Orleans. It arrived from up the Atlantic Ocean at 1 a.m. on Aug. 27, as a near Category 5 hurricane with wind gusts of 150 miles per hour.

After a night of terrifying storm surges, flash floods and destructive winds, by 9 a.m. local time, the storm was reduced to a Category 1 with winds of 65 mph. Before making her way to the U.S. Laura killed at least 11 people in Haiti and the Dominican Republic, the Associated Press reported.

The governors of Texas, Louisiana and Mississippi have all declared state of emergencies. By presstime there were six deaths connected to Hurricane Laura in Louisiana.

“It is clear that we did not sustain and suffer the absolute, catastrophic damage that we thought was likely,” Louisiana Gov. John Bel Edwards said. “But, we have sustained a tremendous amount of damage.”

Although overall the impact upon landfall appeared less than forecasted, massive damage like crashed cell phone towers, fallen trees, downed powerlines, and flooded streets was sustained across the state.

As of midday August 28, PowerOutage, a website tracking national electrical disruptions estimated over 500,000 customers without power in Louisiana, 125,000 in Texas and 37,000 in Arkansas.

“A big tree limb hit my home and punctured a hole … I’m in the process of trying to get a tarp over that,” said Verbon Muhammad, a Nation of Islam Study Group coordinator in Monroe, La.

Others experienced flooding in their homes and destroyed property. One person lost two vehicles from fallen trees. Laura left a war zone like corridor and  in comparison, it was worse than Katrina.

“Even though Hurricane Katrina was [bad]—it didn’t cover the whole state,” said Verbon Muhammad. However, this is only the beginning.

Prompting mandatory evacuations, Laura is the seventh system to hit the U.S. in what is anticipated to be a challenging hurricane season. Already breaking records, she is the first major hurricane in the Gulf Coast since Michael in 2018.

Leading up to Laura’s arrival, weather scientists characterized her as “extremely dangerous” and had warned of a possible “unsurvivable” 20-foot-high storm surge. They marked her strength more powerful than Hurricane Harvey that devastated Texas in 2017.

Such calamities in the Gulf region are particularly dangerous for America. According to figures from the National Hurricane Center, much of the U.S. densely populated Atlantic and Gulf Coast coastlines are less than 10 feet above sea level.

Over half of the Nation’s economic productivity is located within coastal zones. Considering an already under served U.S. infrastructure 72 percent of ports, 27 percent of major roads, and 9 percent of rail lines within the Gulf Coast region are at or below 4 ft elevation.

The center says a storm surge of 23 feet has the ability to inundate 67 percent of interstates and 57 percent of arterials, almost half of rail miles, 29 airports, and virtually all ports in the Gulf Coast area.

The center expected Laura to produce up to 12 inches of rain, with isolated totals of 18 inches, across portions of Louisiana, Mississippi and Arkansas and widespread flash and urban flooding in its wake.

Laura was also expected to bring heavy rainfall to parts of the Tennessee Valley, Lower Ohio Valley, the central Appalachians, and the Mid-Atlantic states in its movement over the course of days. the Mid-Atlantic had just recovered from Hurricane Isaias, said Jim Rouiller, lead meteorologist with the Energy Weather Group to MSN online. There is a possibility Laura will re-intensify once it makes it to Maryland, New Jersey and possibly New York, he said.

Officials in Texas and Louisiana have been seeking hotel room vacancies to bypass the traditional use of mass shelters to avoid spreading the coronavirus—which is presenting a new challenge for disaster recovery planning this season. Respectively Louisiana has 145,000 cases of Covid and Texas has 597,737 cases which are among the highest nationwide.

Texas Gov. Greg Abbott said it was a “miracle” the Lone Star State was relatively spared Laura’s wrath. Over 350 Emergency Medical Task Force Members were deployed, and over 144 hurricane evacuation missions were conducted, said officials. Many Texans evacuated into Austin seeking potential safety. Members of the 10,000 Fearless first Responders received many of the evacuees.

She spoke to The Final Call about the mental and emotional toll of the people they encountered.

“The people are afraid … there is confusion. Our people are looking for leadership,” she observed. There was a look of uncertainty and despair about the disaster and the pandemic. The 10,000 Fearless First Responders set up their own “FEMA operation” on the grounds of Austin’s  Texas Music Ranch where they assisted people into housing arrangements, food and provided Dianetic Auditing services.

Hurricane Laura started as part of a tag team storm with Hurricane Marco that threatened the Mississippi River delta. Coupled with wildfires burning up in California on the West Coast and Covid-19 pestilence, some see the hand of Divine Providence and judgment on America that has not been a beacon of freedom, justice, and equality domestically or globally.

“These are the days of Allah,” commented Verbon Muhammad. “We thank Allah who came in the Person of Master Fard Muhammad, and Messenger-Messiah, the Most honorable Elijah Muhammad and His servant in our midst the Honorable Minister Louis Farrakhan because we have been forewarned,” he said.

Verbon Muhammad added God is “definitely in America judging and expressed assurance that those who believe have faith, resilience  and steadfastness through this time.”

America is vexed by God as she so far has rejected the warning and call to repentance for her record of  injustice by the Most Honorable Elijah Muhammad and the Honorable Minister Louis Farrakhan of the Nation of Islam.

“Righteousness, justice and freedom are despised and fought against regardless to the clear knowledge of God’s hourly punishment and destruction of America by His divine plague of storms,” wrote Elijah Muhammad in his book, The Fall of America.  “But this is as it is written of America in the Book of Revelations, in the Bible … ‘they continue their evil way and did blaspheme the God Who has power over the plagues.”

Elijah Muhammad wrote further America’s hatred and rejection of God’s warnings does not stop the judgment and the destruction of America.

Disaster mitigation experts’ projects Hurricane Laura could inflict more than $15 billion of insured losses when all is said and done.

Hurricane Laura comes as part of a medley of threatening weather events and natural disasters in America and at a time of a deadly pestilence that has taken nearly 180 thousand lives and debilitated the U.S. economy.

Extensive property damage has been reported in Lake Charles, Louisiana, an industrial and casino city of 80,000 people. Laura continued marching forward through Arkansas with powerful winds and heavy rainfall. By midday Aug. 27 more than 30,000 homes and businesses in the state were without electricity.

From Washington, Acting Homeland Security Secretary Chad Wolf said events on the ground are “fluid and challenging,” but the Federal Emergency Management Agency is responding.