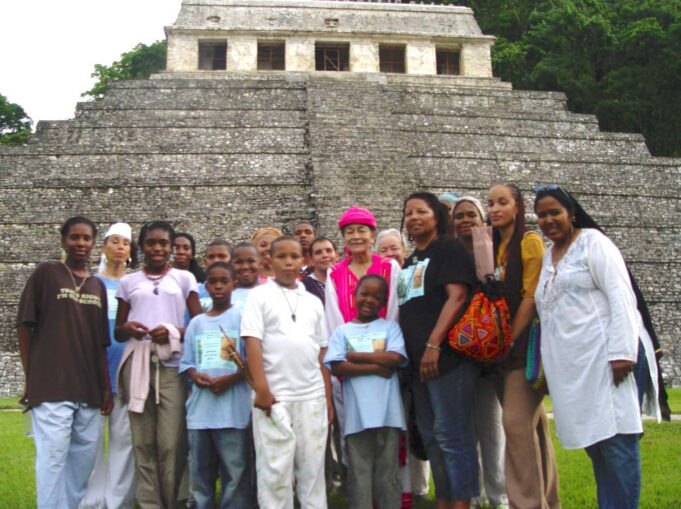 [Editor’s Note: This article was published online on September 19, 2006, and The Final Call will continue to publish articles by our dear and late Mother Tynnetta Muhammad.]

“So when the trumpet is blown, there will be no ties of relationship among them that day, nor will they ask of one another. Then those whose good deeds are heavy, those are the successful. And those whose good deeds are light, those are they who have lost their souls, abiding in hell. The Fire will scorch their faces, and they therein will be in severe affliction.” –Holy Qur’an, Surah 23, verses 101-104

At the outset of this article, I am making a reference to the word “Blackness” as it applies to the Universal Order of the Divine Creation.

Going back as early as six trillion years, according to the Divine Teachings of the Honorable Elijah Muhammad, the Blackness of the Original People corresponded to the material of darkness of the Universe in order for them to survive the intensity of the heat radiating from the light of the sun. Starlight was the original source of the material that makes up the human species and our DNA.

According to Mesoamerican scholarship, the sign of Pluto has a significant connection to the New World coming in, identified as the sixth sun, or world. This great prophesy is contained within the prophetic date that the world has been talking about—2012.

Either the astronomers are confused or there is some manipulation behind the scenes. The planet Pluto was discovered and announced in 1930, the same year that corresponds to the Coming of the Great Mahdi, Master W. Fard Muhammad, and His findings of the Lost and Found members of the universal Nation of Islam.

It is very important to clarify many current unfounded and unjustifiable statements since Planet Pluto has been recognized as the ninth planet of our solar system for the past 76 years.

After arriving to the archeological site of Palenque in Chiapas during the last days of our journey, our small delegation was given permission by the officials to be taken inside the tomb of King Pacal on the 17th day of August. It was a special favor, rarely given to many who would have relished the opportunity.

The origin of the Mayan civilization is rooted in the Mother Culture of Mexico’s oldest civilization of the Olmec. The Olmec civilization is a direct link to both ancient Africa and Asia, tracing our roots back to Asiatic Black origins. Black was never used as a color to distinguish it from other races that came thereafter.

The term “Black” as applied to modern culture in the perspective of world history was never designated as a color called “Negro” or “so-called Negro,” as the Honorable Elijah Muhammad has used the term. Black is not referring to “colored people.” I repeat, Black is not a race; it is universal and produced other races and nations that have evolved on our planet since the beginning of time.

In our MXODUS tour to the South of Mexico, we saw clear evidence of both Olmec and Mayan joined together with the predominant figure of the jaguar—a symbol of darkness with a spotted coat, representing stars in the night and the old ancient sky religion tracing our ancient and remote beginnings. As in Africa, there is the joining in the southern part of Mexico of two rivers—Grijalva and Usumacinta.

The first river rises in Guatemala; the second is in Mexico, and they both converge at various outlets. This system of hydraulics is practically without parallel in the northern tropical band of the continent. These famous rivers travel through Tabasco, Veracruz, parts of the Yucatan, Chiapas and Guatemala, as does the Nile River in Egypt, where along its banks came the first fertile civilizations developed in our homeland Africa.

It is very possible that there was a land bridge between Africa and this part of Mesoamerica in the remote past. With the shifting of the lands through cataclysms-—such as earthquakes, volcanic eruptions and other natural disasters—former land bridges which were islands or another continent even could have fallen under the Atlantic Ocean on one side and the Pacific Ocean on the other, leaving these cultural sites appearing to be related, but yet evolving differently on the remaining land masses.

Who is King Pacal? Why is he buried in such an ornate and strikingly powerful tomb with profound hieroglyphic stories on the lid of his tomb?

Our tour guide, Victor Damas, has been a guide for 41 years, since 1965—a year that coincides with my first visit to Mexico and to Palenque. His belief, through years of study with anthropologists, archeologists and historians, is that the culture of Palenque, which was excavated only partially in recent years within the tropical forests that surround it, is an extension of Egyptian civilization.

Twenty-five years ago, he was given information through psychically-guided dreams that there will be future discoveries of more tombs in Palenque that will point back to Egypt. I found it very impressive when he shared his findings and studies, because in my own writings of my memoirs, which have not yet been produced, going back to 1976 , I wrote similar conclusions concerning the Egyptian-Palenque link.

If we utilize the letter, number and word methodology that we were taught through the Divine Teachings of the Honorable Elijah Muhammad, and trace the word “Palenque” using syllables, then we find the sound “Palen” similar to the name “Pelan,” which is the name of the island commonly known as Patmos in the Aegean Sea.

The latter part of that word is “que,” pronounced “kay,” which may point to the island of Pelan. If we pronounce the name of the state Chiapas, we also have the sound “Cheops,” which is the name of the Great Pyramid in Egypt.

So as we continue our journey in the state of Chiapas in our next article, we will make further discoveries and unlock many mysteries of the Olmec-Mayan civilization of Mesoamerica.

“Were not My messages recited to you, but you used to reject them? They will say: Our Lord, our adversity overcame us, and we were an erring people. Our Lord, take us out of it; then if we return (to evil), we shall be unjust. He will say: Begone therein, and speak not to Me.” -Holy Qur’an, Surah 23, verses 105-108