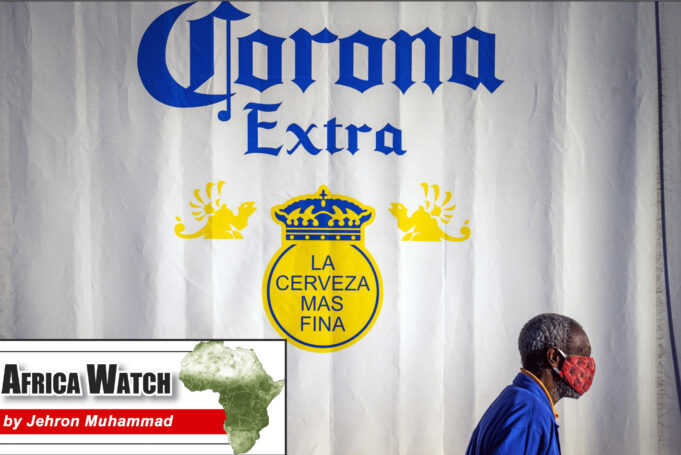 The South African Alcohol Alliance (SAAPA), is a collaborative initiative of NGOs (non-governmental organizations) that advocate for evidence-based alcohol policies in sub-Saharan Africa. Over the years the group has reported on the harmful effects of alcohol consumption. Its reporting included the fact that even though over 60 percent of South Africans do not consume alcohol, the population that does do so in an “unhealthy manner”—including … drinking–which contributed in part to why the country in March and again in July “banned” the consumption of alcohol.

The World Health Organization’s most recent data from 2016 reveals that an estimated 31 percent of South Africa’s population ages 15 and up consumes alcohol, with the majority (69 percent) abstaining from drinking for at least a 12 month period.

Alcohol consumption also contributes to the HIV/AIDs epidemic. South Africa still has one of the highest rates of HIV in the world, impacting 12.2 percent or 6.4 million people, with over 400,000 new infections, reported a 2012 study by the HSRC National HIV Prevalence, Incidence and Behavior Survey.

The association between alcohol and risky sexual behavior has been well-documented as people are less likely to practice safe sexual behavior when under the influence of alcohol. Alcohol is more likely to affect judgement, sexual practice and choices of partners. Research conducted in a Pretoria township found a significant association between various measures of alcohol use (past month, frequency and problem use) and having multiple partners or sexual relations that were later regretted.

The ban on all alcohol sales began on March 27, in response to the coronavirus pandemic and was revoked on June 1. Then without warning the ban was reinstated on July 12. Spirits Europe reported South Africa is the only country that has “re-introduced a complete prohibition on alcohol sales.”

Though the decision, reported businessinsider. com, was made “in an effort to help hospitals cope with an influx of coronavirus patients, alcohol- related violence and drunk-driving accidents are being blamed for the spike in trauma patients.”

South Africa has seen a surge in Covid-19 with more than 276,000 cases, according to NPR and 25 percent of its total (4,000 deaths) were recorded in the week after alcohol was banned for the second time.

A meeting of the National Coronavirus Command Council (NCCC), chaired by South African president Cyril Ramaphosa, recommended a lift in the ban on “the sale of cigarettes and alcohol and move the country to Alert Level Two of the nationwide lockdown,” reported News24.

South African Medical Research Council’s Charles Parry, who, reported the BBC, has spent more than two decades researching the country’s relationship with alcohol consumption, said there is a link between South Africa’s past and “our drinking culture.”

“There was a period of time when alcohol was not available to Black South Africans,” said Mr. Parry. He added, that this led to people taking their drinking to illegal bars, with critics viewing this as an act of defiance against the apartheid system.

In locations like Cape Winelands, laborers who were so-called colored or Africans of mixed race were often paid in alcohol in what was called “the top system.” Although this system was long ago discontinued, its harmful legacy is still pervasive in many “colored “communities across the Western Cape.

The irony is that while past alcohol restrictions were largely based on racist polices, current restrictions were put in place to save lives. A recent BMC Medical Journal reports that South Africa has a serious problem with the number of fatalities due to “drunk driving,” but the real problem is in the details, based on the demographic breakdown.

“Men are bigger drinkers by a wide margin, across all socio-economic levels. There are proportionally more high-income drinkers—but it’s the middle and lower-income groups that drink the most, and abuse (binge drink) the most,” the journal reported.

The report looked at mortality rates and noted it’s the lower socio-economic levels who are dying alcohol-related deaths.

“Overall, approximately 62,300 adults died from alcohol-attributable causes of death in South Africa in 2015. With a total of approximately 529,400 deaths from all causes, roughly one in ten deaths was attributable to alcohol use,” the researchers said.

“In the low income group, the majority of the alcohol-attributable deaths occurred due to infectious diseases,” like HIV/AIDS. It stands to reason that if being sober enough to take preventative measures is a principle reason to ban alcohol consumption, the same can be said to stave off the increase of the coronavirus pandemic. Having a social distancing, proper hygiene facilitating and PPE (personal protective equipment) conscience community during a pandemic is sacrosanct.

In South Africa, the ban is receiving push back from the alcohol industry. According to the Trade association Spirits Europe, if the ban lasts another nine weeks, they forecast the potential of taxes that the country could lose is as much as $1.4 billion.

Ulrich Adam, director general of Spirits Europe, said, “The ban rips away all of the benefits from the Economic Partnership Agreement (EPA) between the EU and South Africa at a time when we should actually find ways to deepen our trading relations to support each other’s recovery process.”

Adam’s complaint is also that while European imports of spirits is being banned, South Africa continues to export, particularly wine.

African alcohol consumption includes Nigeria’s 13 liters of alcohol per capita consumption in 2019. The Kingdom of Eswatini and South Africa ranked second and third respectively, with under 10 liters per person.

The illicit alcohol market on the continent, includes the production and consumption of unrecorded alcoholic beverages, which can be dangerous and, in some cases, lethal. This illegal trade is quite common in Sub-Saharan Africa. According to Statista.com making these home brews is deeply rooted in tradition and in some countries the locally produced beverages tend to be cheaper than the commercial equivalents.

In 2018 over 60 percent of Uganda’s alcohol was illicit, making it the African country with the largest illicit alcohol market in Africa.