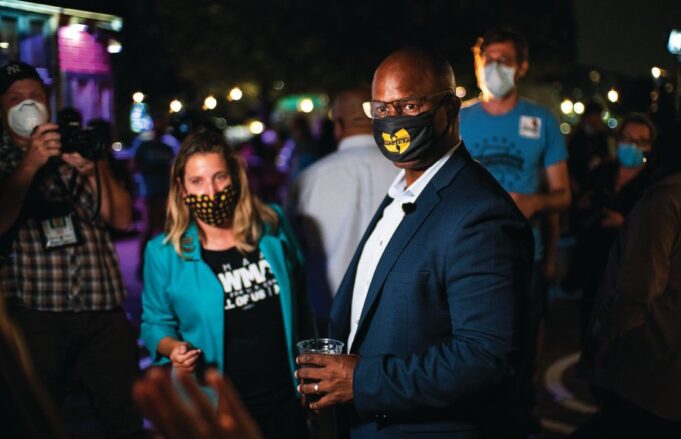 She climbed a political mountain and unseated the scion of a St. Louis political dynasty whose family held the seat for more than 50 years.

Ms. Bush, who was in street protests ignited after the police killing of Michael Brown, Jr., in Ferguson, Mo., in 2014, defeated 10-term Congressman William Lacy Clay in the state’s Democratic primary election on Aug. 4.

“They counted us out,” Ms. Bush told supporters at her St. Louis campaign office. “They called me—I’m just the protester, I’m just the activist with no name, no title and no real money. That’s all they said that I was. But St. Louis showed up today.”

“We’re seeing these candidates stepping up, running competitive races, winning, putting up a good fight,” she told The Final Call. “I think this is something you can look forward to.”

“(Reps.) Ayanna Pressley, Alexandria Ocasio-Cortez and Rashida Tlaib paved the way that people of color are following. They’ve shown it can be done. Bush’s win should have folks waking up and if you’re a Black elected official, you feel a type of way.”

Ms. Watley, founder and owner of The Griot Group LLC, a strategic communications and political advocacy consulting practice, said it’s significant that Ms. Bush won in a state that is strikingly conservative and deep red; where the Ferguson uprising happened; where the NAACP issued a travel warning cautioning Blacks to be extra careful when visiting the “Show Me” state; and a place with a long and sordid history of being a Ku Klux Klan stronghold.

“I expect to see this continuing. Politics as usual in these unusual times isn’t gonna fly,” said Ms. Watley, who worked on the campaign of Phyllis Harwick, who fell just short in her attempt to win a seat in District 19 of the Missouri House of Representatives.

Ms. Bush, a domestic violence survivor who was once homeless and living in her car with her children, says on her website that she’s ready to bring the fight from protest to politics.

She told Essence, “I always think that ‘I am the people I serve.’ I did not coin the phrase, but I always say that because I have lived low wage. I’ve been unhoused, living out of a car with two children. I have lived uninsured … I’m a victim of violent crime. I’m a survivor of sexual assault and domestic violence. So I’ve been through so many things that have happened here in this community that haven’t really been addressed by our congressperson even though he’s been in that seat for 20 years.”

Ms. Bush advocates for free public college education, substantive criminal justice reform, increasing the minimum wage in her district to $15 an hour, the Green New Deal, fighting for climate change, ending economic inequality and pushing for Medicare for all. She got the support of Vermont Sen. Bernie Sanders who tweeted after the race: “Congratulations to @CoriBush on her primary victory tonight! She is a true progressive who stands with working people and will take on the corporate elite of this country when she gets to Congress.”

Wins by Ms. Bush, New York City educator Jamaal Bowman and other candidates on the Left of the Democratic establishment point to voter dissatisfaction with the status quo, resistance to Trump administration’s policies and programs that are inimical to Blacks and the poor.

There is the collapse of social programs and safety nets, even as 55 million people find themselves unemployed, 30 million have lost their health insurance along with their jobs.

The insurgency within the Democratic Party shows no signs of abating and there is some disagreement over the impact of these races.

“The Squad” of Reps. Ayanna Pressley, Rashida Tlaib, Alexandria Ocasio-Cortez and Ilhan Omar have blazed a trial for what being progressive in the House of Representatives could look like.

The quartet has not fallen in line with the majority of their colleagues and are still making their progressive voices heard despite intense pushback from establishment Democrats.

The Squad has remained fairly strong in their progressive ideals, not backing down so this new wave could do likewise.

Because of the political environment and the deep desire for change, many believe this “progressive” streak could mean impressive gains for Blacks. Ms. Watley was more cautious.

“We have yet to tell the impact of being able to govern. It’s one thing to win, and another to navigate, negotiate and do the consensus-building necessary to get laws passed,” she said.

In a moment of crisis, Ms. Bush’s voters wanted solutions now, not half-measures and moderate reforms. She also got outside help from late political ads paid for by a progressive group outside her district and support from Sen. Sanders.

D.C. radio show host and political commentator Jamila Bey agrees with Ms. Watley that progressive politics and the movement to the Left will continue where America’s demographics darken.

“Once America gets Browner and Browner, woker and woker, the Democratic establishment has gone along with it and we have more females, Blacker in color, and political ideological shifts,” said Ms. Bey, host and executive producer of the Sex Politics & Religion Hour podcast.

“I’ve got to give it to the Gen-V and Millennials because for them, performative politics mean nothing, certain soundbites don’t mean anything,” said Ms. Bey, who is also a senior fellow at the Bernard Center for Women, Politics & Public Policy. “These days what we’re seeing is candidates talking about minimum wage, childcare, making college accessible, abolishing college tuitions. These are issues important to the mass of younger, Browner, Blacker people … You can gerrymander all you want, and the U.S. Supreme Court gutting the Voting Rights Act are major setbacks but that won’t stop the progressive movement. We’re going to see more of this because health care and childcare aren’t just an issue, it’s a national security issue,” she argued.

According to the Center for American Women and Politics, which began collecting the racial identifications of female candidates in 2004, this is the largest number of Black female candidates who have run for the House or Senate, overall and in both parties, in a single election year.

As primary season draws to a close, nearly 60 Black women are still in the running, according to Collective PAC.

According to civil rights and social justice activist Rev. Graylan Scott Hagler, “You’ve got people who are at this point where they’re tired of these last four years of dysfunction. You have a whole segment of the uprising where stuff seems to not make sense.”

“People are stretched beyond the rationale of the last four years. Minneapolis was a flashpoint because it characterizes the hypocrisy of this police thing, what can happen to you when you do nothing. Now we’ve turned ‘Black’ into the political category it was meant to be: resistance and a category to challenge White supremacy,” added Rev. Hagler, senior pastor of Plymouth Congregational Church in Northeast D.C.

Rev. Hagler’s problem with progressivism, and those who practice it, is that everything is still viewed through a White lens.

“For Black people, and I suspect other people of color, it is far beyond right, left, liberal, conservative or progressive,” he said. “There is a great chasm that exists in the electorate where it is unable to understand the historical racial divisions in the nation and not knowing it or understanding it is unable to do the analysis of politics and race. Therefore, the nation votes right or left, conservative or liberal and yet it is still all racist to the core and does not bring about racial justice in a meaningful or lasting way.”

Americans—especially Black Americans—are angry, scared and frustrated as they watch their lives disintegrate, displaced by a pandemic that has so far infected more than five million people and killed more than 157,000 Americans.

That anger is compounded by the lack of a credible response from the Trump administration or the federal government and the collapse of most of the moorings that Americans depended on.

Rev. Hagler said whatever Blacks and their allies do as it relates to social and racial justice won’t mean much unless they confront and defeat the twin pandemics of White supremacy and racism.

Jamaal Bowman, who won a congressional seat in his race against Rep. Eliot Engel, D-N.Y., speaks to supporters during his primary-night party June 23, in New York. Photo: AP/Wide World Photos

The killing of George Floyd in Minneapolis ignited a series of violent clashes between protesters and police. Democratic lawmakers say the unrest has unified a new crop of progressive, pro-active politicians willing to address the needs of the Black community. Photo: MGN Online