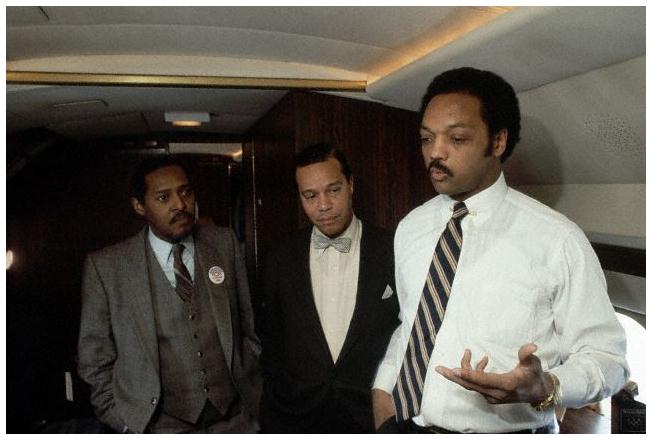 The vitriolic slander against the person and ministry of the Honorable Minister Louis Farrakhan continues to spew forth from a host of Jewish periodicals. These periodicals are currently carrying out a campaign of slander that aims to further the “no platform” policy against the Minister’s message.

These publications and their false allegations against our beloved Minister have repeated certain lies over and over again during the past 36 years; so much so that their lies are now widely believed to be the truth by many who have fallen victim to the anti-Farrakhan propaganda.

The antidote to lies and falsehood is the truth.

Let us take a look at some critical facts which comprise a strong dose of truth that buries the popular lie that Minister Farrakhan praised Adolph Hitler, the German mass murderer.

Rev. Jesse Jackson Sr. of the Rainbow Push Coalition launched a major campaign to become the first Black president of the United States in 1984. Rev. Jackson agreed that justice and fair treatment of the Palestinian people be a governing principle of America’s foreign policy towards Israel. Many in the Jewish community were angry with Rev. Jackson because of his 1979 meeting and photo-op with Palestinian leader Yasser Arafat. An example of Rev. Jackson’s posture toward the Palestinian/Israeli foreign policy included the following:

As a result of Rev. Jackson’s position Jewish groups sought to ruin his campaign. A March 12, 1984 Time Magazine article reported on Jewish assaults on Rev. Jackson:

“Jackson’s defenders noted that he has been the target of harassment throughout the campaign. A group called Jews Against Jackson, an offshoot of the radical Jewish Defense League that has been disavowed by leaders of most Jewish organizations, pledged publicly to disrupt his candidacy. Two of its members were arrested for interrupting his announcement speech on Nov. 3 in Washington, D.C. A window in Jackson’s New Hampshire campaign headquarters in Manchester was smashed, and his campaign offices in Garden Grove, Calif., were firebombed. Jackson’s life has been threatened.”

“I’m saying to the Jewish people who may not like our brother, it is not Jesse Jackson that you are attacking. Remember this now. You’re not attacking an individual. Jesse’s gone past that now. When you attack him, you attack the millions that are lining up with him. You’re attacking all of us. That’s not intelligent. That’s not an intelligent thing to do. That’s not wise. We know that Blacks and Jews have had a good relationship in the past. We’ve gotten along well, because you’re a suffering people and so are we.

But my dear Jewish friends, you must understand that everything comes of age. We cannot define our self-interest in terms of your self-interest. And because our self-interests differ because we’ve come of age, why dislike us? Why attack our champion? Why hurl stones at him? Why feed the Press so that they can create a climate into which hatred and bitterness and strife can be poured, creating the same kind of climate that led to the assassination of John Kennedy, the assassination of Martin Luther King, Jr., Malcolm X and Bobby Kennedy. Why create that kind of climate when you have the power to turn it around and show the world that you have sense? Don’t you realize what you’re doing? … This is a foolish thing that you are doing.

I say to you as intelligent people, sit down and talk with Rev. Jackson. Sit down Jewish leaders and talk with us. We are ready to talk with you. Sit down and talk like intelligent people who have a future at stake. But if you harm this brother, I warn you in the name of Allah, this will be the last one you harm. We are not making any idle threats, we have no weapons, we [don’t] carry so much as a pen knife. But I do tell the world that Almighty God Allah is backing us up in what we say and what we do, and we warn you in His name—leave this servant of Almighty God alone. Leave him alone. If you want to defeat him, defeat him at the polls. We can stand to lose an election, but we cannot stand to lose our brother. …”

This powerful defense was the precipitant of Nathan Perlmutter of the ADL and Nat Hentoff of the Village Voice labeling Minister Farrakhan as a “Black Hitler” on February 27, 1984.

This wicked, intentional smearing of Minister Farrakhan as a “Black Hitler” caused the Minister to defend himself March 11, 1984 against an attempt at character assassination:

“Here the Jews don’t like Farrakhan and so they call me ‘Hitler.’ Well that’s a good name. Hitler was a very great man. He wasn’t great for me as a Black man but he was a great German and he rose Germany up from the ashes of her defeat by the united force of all of Europe and America after the first World War. Yet Hitler took Germany from the ashes and rose her up and made her the greatest fighting machine of the twentieth century, brothers and sisters, and even though Europe and America had deciphered the code that Hitler was using to speak to his chiefs of staff, they still had trouble defeating Hitler even after knowing his plans in advance. Now I’m not proud of Hitler’s evil toward Jewish people, but that’s a matter of record. He rose Germany up from nothing. Well, in a sense you could say there is a similarity in that we are rising our people up from nothing, but don’t compare me with your wicked killers.”

ADL Exposed for Lying On the Minister

William E. Alberts of the Monroe Trotter Institute authored a report entitled Mainstream Media as Guardian of Racial Hierarchy: A Study of the Threat Posed by Minister Louis Farrakhan and the Million Man March. He documented the ADL’s manipulation of Minister Farrakhan’s words so that they could make him appear to be an admirer of Adolph Hitler. Alberts write:

“In 1984, Boston Globe columnist David Nyhan reported that the Anti-Defamation League (ADL) of B’nai B’rith deleted Farrakhan’s words, ‘Now I’m not proud of Hitler’s evil against Jewish people, but that’s a matter of record … But don’t compare me with your wicked killers.’ Nyhan wrote that the ADL defended the deletions: ‘Alan Schwartz, assistant director of research for the ADL, in New York, said in a phone interview… that he omitted the two sentences for reasons of brevity and that he in no way twisted Farrakhan’s remarks to make the black Muslim leader seem more pro-Hitler than he is.’ ”

Nyhan then articulated the ADL’s obvious distortion of Farrakhan’s words: “But the fact remains: Farrakhan originally said, ‘I’m not proud of Hitler’s evil against Jewish people,’ and he added, ‘Don’t compare me with your wicked killers.’” To delete these phrases changes Farrakhan’s meaning. However, neither readers in 1984 nor during the March were made aware of Farrakhan’s rejection of the comparison with and condemnation of Hitler as one of ‘your wicked killers.’ The deletion of such a critical context and the reported explaining away of its significance could indicate a tendency (on the part of those who constantly condemn Farrakhan as anti-Semitic) to only report and print the news that fits the agenda or bias of the racial status quo. The omission of such an important context makes suspect other charges against Farrakhan. It also indicates the need of an in-depth study of the ‘secret relationship’ between Jews and Blacks committed to uncovering the whole truth rather than only those facts that fit preconceived views.”

This brief overview of facts makes it crystal clear that it was the ADL who first invoked the name Hitler to smear Min. Farrakhan for courageously defending his brother, Rev. Jackson.

Minister Farrakhan examined their reference to Hitler to defend himself against the scandalous association of him—a man of peace—with Hitler, one of the most wicked killers in world history.

The facts are clear.

The facts vindicate Minister Farrakhan so that he might receive the help, support and honor he so richly deserves.

Nation of Islam Student Minister and author Demetric Muhammad is based in Memphis, Tenn., read more at www.researchminister.com.

The Honorable Minister Louis Farrakhan came under attack after defending Jesse Jackson during his presidential run in 1984. Death threats from the Jewish community prompted The Nation of Islam to offer security to Rev. Jackson, his family and campaign helpers. Photo: Final Call archives.