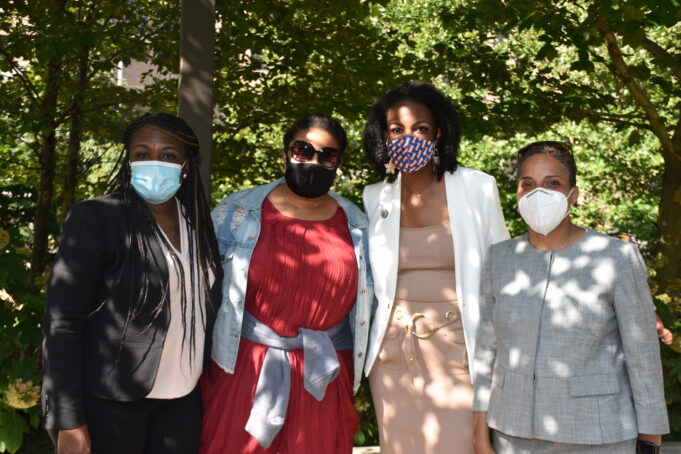 ST. LOUIS—One day after the Democratic primary for the upcoming November elections, hundreds of supporters gathered at a press conference to celebrate the accomplishments and perseverance of three Black women in politics. The Black, female force came together to support each other in the midst of many obstacles in their path to capture and pursue key positions in government: Kim Gardner, Cori Bush and Tishaura O. Jones.

The women surrounded by supporters stood proud August 5, on the St. Louis Arch grounds across the street from the Old Court House steps where a bronze statue of former slave Dred Scott and his wife Harriet is erected. It is also the same grounds where former shackled enslaved Blacks walked before being sold on those same steps.

St. Louis Circuit Attorney Kimberly Gardner, who has been the target of death threats, slander and even ridiculed by President Donald Trump was successful in retaining her office despite opposition. She was joined at the press conference by newly-elected Rep. Cori Bush and Dana Kelly who recently announced she intends to run for mayor of St. Louis.

“This is about the people that spoke and said enough is enough,” said Atty. Gardner “It’s not about this position, it’s about people you don’t even see. People who just want to be treated with respect, people who just want to know that you give a care about them,” she added. She won in a landslide against her Democratic primary opponent and will go head-to-head with Republican nominee Daniel Zdrodowski this November.

“When people in this state and the federal government want to racially divide us and talk about race and talk about class, this election was the people’s election,” said Atty. Gardner. “The wage disparity in this city which we know, the health disparity, the education disparity, we know that is the root cause of what drives individuals to the criminal justice system. So, I say enough is enough with this rhetoric of divisiveness,” she concluded.

According to Glynda C. Carr, president and CEO of Higher Heights for America, an organization that promotes Black women for elected positions across the country and tracks their progress, “voters are looking for a new generation of leadership.” The organization conducted a survey that states Black women now make up 4.3 percent of all state legislators, up from 2.3 percent in 1999. Black women are also mayors of seven out of 100 of the most populous American cities, an increase from one in 2014.

One of the biggest upsets during the Democratic primary in St. Louis was when Cori Bush shocked the political establishment with her win over Rep. William Lacy Clay, of the first district. Clay and his father William Clay Sr. held the seat for approximately five decades of combined leadership in Washington, D.C.

Ms. Bush, a community activist was among the front-liners during the Mike Brown Ferguson unrest. This was her second time running and she didn’t let anything get in her way from victory. “Let me just make it clear, we stand together as one unified group. And even though they launched all these ugly attacks, lies, against us St. Louis said, ‘we are done with that,’” she told those gathered at the press conference.

“The fact that you used dirty politics against women who didn’t do the same—the women kept fighting. … We are here right now showing all of St. Louis that we are standing together and ready to do the work,” she added “No more of the old politics and we are not backing down. So, thank you all for supporting us, it’s time!”

Tishaura O. Jones, won her Democratic primary in a close race and aims to be re-elected to a second four-year term as city treasurer in November.

The trend of Black women rising to political power especially in St. Louis resonated with another Black woman who congratulated Atty. Gardner, Ms. Jones and Ms. Bush. Dana Kelly is stepping up as another progressive Black woman in politics in the city. She announced on August 2 that she will run for mayor of St. Louis in 2021.

“The message these wins send to the old guard is that the tide is shifting. With great respect for the people that have paved the way for us, we graciously take the torch and carry it to the next level of consciousness and action.  Inaction is no longer acceptable, and it also sends the message that women are a force to be taken seriously,” said Ms. Kelly.

During the press conference a reporter asked the three women what can a Black woman from St. Louis bring to leadership and city politics that the city have never had? Ms. Jones, a single mother and daughter of former St. Louis City Comptroller Virvus Jones, quickly stepped to the microphone to respond.

“As mothers we lead from a different place. We lead from wondering how others who are in our same situation are going to pay their bills, keep a roof over their heads, send their kids to school, we want the best for all of our children,” she explained.

“We lead from a standpoint that will call on our civic and business leaders to do right by this community. With Black women at the table as I always say: when you solve the problems of a Black woman, you solve everybody’s problem.”