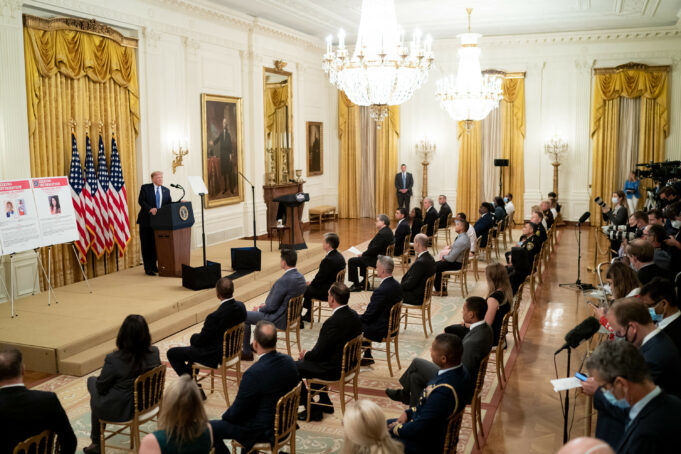 Cities across the country including Cleveland, Detroit, Baltimore, and Oakland are targets for President Donald Trump’s round two deployment of federal agents under the guise of combatting violent crime.

Mr. Trump promised millions in funding along with more manpower under his initiative dubbed “Operation Legend,” launched early July, and tied to designated police departments across the country. The move comes amidst escalating calls to reform, defund and even dismantle police following protests over the death of George Floyd in Minneapolis, Minn., while in police custody.

Agents have been deployed from different federal agencies including the FBI (Federal Bureau of Investigations), ATF (Bureau of Alcohol, Tobacco, Firearms and Explosives) and DEA (Drug Enforcement Administration). Agents have already been sent to Chicago and Kansas City, Mo.

Critics argue the move is nothing more than Trump overreach fueled by lagging poll numbers, a troubled reelection bid and fraught with violations of the rights of Americans.

As part of Operation Legend, the alleged leader of the Black Disciples street gang in Chicago was among 23 individuals arrested and facing criminal charges as part of a federal investigation into drug and gun trafficking on the city’s South Side, reported the U.S. Attorney’s Office for the Northern District of Illinois on July 29. The investigation was led by the FBI and Chicago Police Department, with assistance from ATF, DEA, IRS Criminal Investigation Division, the Chicago High Intensity Drug Trafficking Task Force, and the FBI Windy City Task Force, the agency noted.

Activist Fred Hampton Jr. is the son of Black Panther Party Illinois Chapter Chairman Fred Hampton, who was assassinated by the FBI and Chicago Police on December 4, 1969.

Historically, people have been unjustly locked up by law enforcement agencies like the New York, Oakland, and Chicago police departments, but now there’s more of an official acknowledgment through the Trump administration, he said.

Blacks suffer attacks under government labels like “Black Identity Extremists” and “war on drugs,” or “war on gangs,” which minimize the fact that the target is the Black population in general, argued Mr. Hampton, Jr.

According to the Department of Justice, $1 million is earmarked for Cleveland to combat violent crime, in addition to almost $10 million to hire 30 officers, five Ohio State Highway Patrol troopers, and four Adult Parole Authority officers.

According to Justice Herdman, U.S. Attorney for the Northern District of Ohio, the federal expansion will be directed at gang violence, drug-related shootings, and illegal firearms. Cleveland would see approximately 25 federal investigators, but no federal troops, he said at a recent news conference.

More than 25 federal investigators from the FBI, DEA, and ATF were sent to Cleveland where Blacks make up nearly 50 percent of its population compared to Whites at 40 percent.

Mr. Trump is sending approximately 42 federal agents to predominantly Black Detroit. An additional 10 ATF agents have been reassigned to work on violent gun crimes, another $1.4 million is earmarked for violent crime reduction, plus $2.4 million for the Detroit Police Department to hire 15 officers.

Milwaukee will receive $1.9 million in funding, plus $10.2 million to the police departments of Milwaukee, Wauwatosa, and Cudahy to hire 29 officers.

Police reform activists say the plan is rooted in racism and part of a crackdown designed to quell peaceful protests, rather than to protect and serve. Civic leaders call it an unnecessary, unwelcome abuse of federal resources.

“As demonstrated now in Portland, these federal forces have used the pretext of protecting federal property to also patrol streets, way outside of their lawful jurisdiction, arrest residents without cause and trample on Constitutional rights,” they wrote.

“These actions further erode trust in government at all levels; are de-legitimizing local law enforcement; and escalate, rather than deescalate tensions,” the letter stated. “Legislation must prevent the president from sending unidentified federal agents to operate with impunity in their cities, except for federal agents assigned to field offices working on existing cases and investigations and the legislation must mandate the Trump administration’s notice, consult, and consent from local authorities, before being given the authority to deploy federal agents,” the mayors demanded.

“In addition, agents and their vehicles must have visible identification at all times, unless on an undercover mission authorized by the local U.S. attorney; and, the legislation must place limitations on federal agents’ crowd control activities to protecting federal property,” the letter noted.

“I don’t see a good outcome in terms of the relationship between those in military law enforcement and the people, if they attempt the strong handed moves made in Portland and other places in the city of Oakland. There’s too much revolutionary tradition,” said Student Minister Abdul Sabur Muhammad of Muhammad Mosque No. 26B in Oakland.

He said the spirit of revolution is strong in Oakland, which has a community that has proven its willingness to resist. He noted that Mr. Trump’s plan reminds him of the Honorable Minister Louis Farrakhan’s consistent prophetic warning that the government would flood the inner cities with federal troops.

“When this day arrives, and it will, the breakdown of law and order will be so great in America that it will be as the prophets foretold, ‘a time of trouble such as never was, since there was a nation even to that same time.’ Blood, as John the Revelator saw, ‘will be running in the streets even up to the horse’s bridle.’ This is a terrible prophecy, and it does not appear that it will be avoided or averted,” the Minister cautioned.

“President Trump, in his current action, is manifesting the very warning the Honorable Minister Louis Farrakhan has given. When we see troops coming into our cities, even worse than law enforcement, they have no peacekeeping role. They are there for war,” said Abdul Sabur Muhammad.

Oregon Governor Kate Brown announced July 29 that following a discussion with Vice President Mike Pence and others, the federal government agreed to withdraw its officers from Portland.

However, she noted a “limited contingent of federal officials—who provide security year-round to the federal courthouse—will remain and stay focused on its interior.”

This follows weeks of Portland protests in support of Black Lives Matter near a federal courthouse that became violent, chaotic scenes of federal agents accosting demonstrators. The feds deployed teargas, peppers spray and other weapons as protestors were beaten, injured and arrested.

“They have acted as an occupying force & brought violence,” said Gov. Brown in July 29 tweet.

Mr. Trump has vowed to send federal agents to clean cities and “get rid of the anarchists and agitators, which is what they are. They’re not protesters,” he said.

Dr. Aquil Basheer said it is important for protestors to remain energized and to control the story and focus of demonstrations.

The former Black Panther has worked for decades in community intervention and violence prevention through his non-profit Maximum Force Enterprises, which offers a 16-week curriculum on peacekeeping for ex-gang members and community outreach workers.

“I will tell you right off the top, just from what I have seen … you’ve got agents across the board that have been saturated within the movement to cause disruption. You’ve got entities in there that want to make it look as if the individuals who are protesting are individuals that are trying to basically decimate the whole structure of the American continent,” Dr. Basheer told The Final Call.

“Why is that so important? First of all, you derail the fact that this was about Black lives. You derailed the fact that this was about concentrating on the unjust oppressive treatment of our people. … Number two, you have and you want to make it look as if there’s some type of social construct that is developing that needs massive law enforcement, which really counterbalances the fact that this is all about police abuse. Now you see an excessive amount of force. They did the same thing with COINTEL,” he stated, referring to tactics of the FBI and former Director  J. Edgar Hoover’s Counter-Intelligence Program, which targeted, surveilled, and jailed members of the civil rights and Black Power movements of the 1960s and 1970s.

For Cheryl Ford Dorsey, retired LAPD sergeant, observing the country’s social justice climate and federal response drums up thoughts of presidential elections in November. “Truthfully, I think these people are practicing and preparing for the foolishness that’s going to happen, come Nov. 4,” she said.

“I do believe that this guy in the White House realizes his days are numbered, and I believe that this is a trial run to see how much they can get away with and what exactly can they do to try to keep him in there,” stated Ms. Dorsey. (Final Call staff contributed to this report)