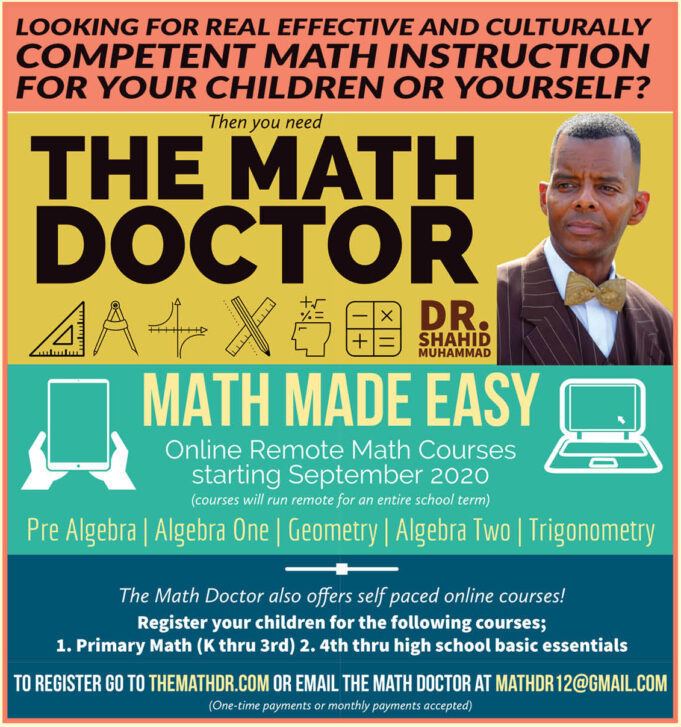 CHICAGO—Shahid Muhammad, affectionately called “The Math Doctor,” has taught math on all grade levels including the college level, for the past 39 years, via the classroom setting, videos, lectures, and now on-line.

Most of his teaching career has taken place at Muhammad University of Islam located in Chicago and also at Malcolm X College since 2008.

“Watching how my high school algebra teacher presented math, created a drive in me to want to teach like that. However, the teachings of the Most Honorable Elijah Muhammad really solidified my love of math and the desire to help our people to master math” stated Shahid Muhammad.

Mr. Muhammad has been very instrumental in organizing community outreach programs, that include donating food and an invitation to Mosque Maryam to residents in struggling communities. While visiting these communities, he has observed that the lack of mathematical literacy has impacted every aspect of life.

“We’re mentally and spiritually dead as a people because we operate off of emotion and not mathematics. Mathematics is using actual facts, using critical thinking, problem solving. The enemy doesn’t want us to have that ability, that’s why we’re at the bottom of math. Mathematics is the foundation for Nation-building,” stated Shahid Muhammad.

Before Covid-19 shut the country down, he toured various cities giving workshops like: “Why We Must Master Math,” to youth and teachers on the relevancy of mathematics. Mathematics is critical in science, architecture, music, art, video games, engineering…every aspect of life is mathematics.

“The Honorable Minister Louis Farrakhan said, ‘We are mathematics. Our bodies are perfect mathematically run machines,’” he added.

Beginning in September 2020, Brother Shahid Muhammad is launching “Math Made Easy,” online, remote, self-paced math courses. The courses are open to children and adults interested in learning or enhancing their knowledge of math. Interested parties are encouraged to register by August 15 for a free informational session at www.themathdr.com.