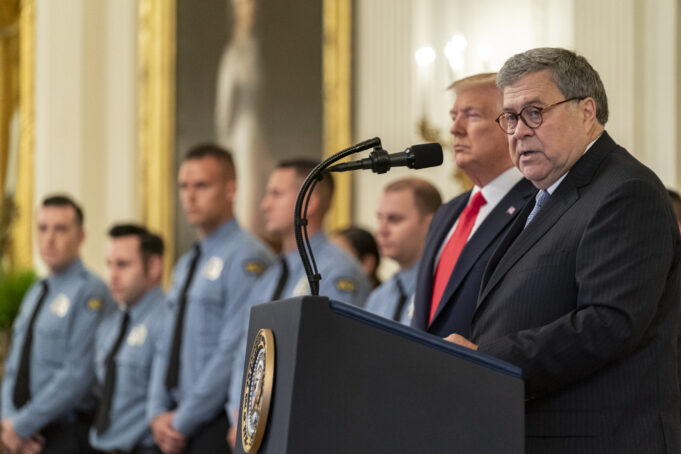 WASHINGTON—There is now widespread consensus in the legal community here, that in his more than 500 days in office, William Barr has conducted himself like a “family lawyer” working for President Donald J. Trump, and nothing like the attorney general of the people of the United States.

In testimony before Congress July 21, he confessed that he substitutes his instincts for facts and evidence. In one exchange he was questioned by House Judiciary Committee member Mary Gay Scanlon (D-Pa.) about an assertion that he had made in interviews echoing Mr. Trump’s opposition to mail-in voting stating that: “Foreign countries could manufacture counterfeit ballots.”

Rep. Scanlon asked Mr. Barr if he had evidence to support such a bold assertion.

The problem is all lawyers are required by courts to rely on facts and evidence, not conjecture. And his testimony follows a pattern of deception, evasion and misrepresentation that by any professional standards would mean such a lawyer in question would be terminated or disbarred.

In fact, a group of lawyers, law professors, and four former presidents of the D.C. Bar Association have signed a letter calling for an investigation and his disbarment, revoking his law license calling Mr. Barr “unfit” for office, and unfit to practice law in the nation’s capital. The complaint argues that Mr. Barr has broken the ethics rules by being dishonest and by violating his oath to uphold the Constitution, along with other charges.

“Look Attorney General Barr in our eyes has repeatedly violated his oath of office and has repeatedly shown that he is not following the ethics rules, that every attorney in Washington, D.C. must follow,” Roy Austin, a former Justice Department and White House official in the Obama administration said in an interview. “For that reason, we believe that the D.C. Bar should conduct an investigation of him and make a determination as to whether or not what we are seeing is in fact, correct. And whether or not he should have his license removed.”

“The Barr complaint really speaks about his lawlessness,” Angela Davis, Distinguished Professor of Law at American University added. “Because he’s violated all of these rules of professional responsibility that lawyers have to abide by. It makes a very strong case, and it speaks to his lawlessness and lying under oath,” Professor Davis said.

“William Barr’s views of presidential power are so radically mistaken that he is simply the wrong man at the wrong time to be attorney general of the United States,” Rep. Jerrold Nadler, chair of the Judiciary Committee said during Mr. Barr’s appearance.

Numerous instances of Mr. Barr’s bad conduct in office were cited during the hearing. “On two separate occasions, after President Trump tweeted, ‘Liberate Michigan,’ to subvert stay-home orders to protect the public health of people in Michigan, protesters swarmed the Michigan Capitol carrying guns, some with swastikas, Confederate flags, and one even with a dark-haired doll with a noose around its neck,” committee member Pramila Jayapal said in a query to the attorney general. “Are you aware that these protesters called for the governor to be lynched, shot and beheaded?”

“There is a real discrepancy in how you react as the attorney general, the top cop in this country. When White men with swastikas storm a government building with guns, there is no need for the president to, quote, ‘activate’ you, because they’re getting the president’s personal agenda done,” said Rep. Jayapal (D-Wash.).

“But when Black people and people of color protest police brutality, systemic racism and the president’s very own lack of response to those critical issues, then you forcibly remove them with armed federal officers, pepper bombs, because they are considered terrorists by the president,” she added.

“I would say he’s being more than careless,” attorney Austin said. “He’s being quite intentional in his public statements, in his testimony before Congress and his decisions to interfere with other investigations.

“He will take certain actions against certain people and he will ignore the actions of other people. So the fact that he is so quick and willing to use force against people who are protesting President Trump, but so unwilling to use force against a group of individuals who take guns into the state house in Michigan tells you that his decisions are political and that his decisions are not for the people. He is supposed to be treating all people the same. And he is clearly showing a very clear political bias in the decisions that he is making.

“And these are the types of acts that had any other attorney committed similar conduct, there is no question that the bar would open an investigation to that end, and should they find those things to be true, they would be disbarred,” Mr. Austin continued.

“I think the question here is what do you do with an attorney general? Does that change? We say, no, it shouldn’t change the calculus. He is an attorney here in Washington, D.C., and he has to follow the same rules every other attorney must follow.”

“Mr. Barr’s client is the United States, and not the president,” the group’s letter says. “Yet, Mr. Barr has consistently made decisions and taken action to serve the personal and political self-interests of President Donald Trump, rather than the interest of the United States,” the letter says. Mr. Barr, they complain, displays a tendency to use all the Justice Department’s tools—and in its $32 billion budget there are a lot of them—not to protect “all Americans” but to protect the president, personally and politically.

Mr. Barr has also blindly supported the president’s unconventional theories about voting by mail and the Covid-19 pandemic. “You are aware that African Americans, Black people, disproportionately die from Covid-19, coronavirus, correct?” Rep. Cedric Richmond (D-La.) asked at the hearing.

“And not that it would be the first time that African Americans would risk their lives to vote in this country, to preserve its democracy, but the suggestion is that them having the ability to vote by mail would somehow lead to massive voter fraud,” said Rep. Richmond.

“I didn’t say that. I just stated, I think, what is a reality, which is that if you have wholesale mail-in voting, it substantially increases the risk of fraud,” Mr. Barr said.

“For William Barr, the top cop in our country, to somehow suggest that vote by mail leads to fraud is wrong on its face,” the Reverend Dr. Raphael Warnock, senior pastor at the Ebenezer Baptist Church in Atlanta told “Democracy Now!”

“But it’s part of what we’ve seen with the Republicans as we’ve dealt with this whole issue of voter suppression. They’ve used the language of voter fraud. Everybody knows that voter fraud through voter ID, for example, is almost nonexistent. It’s really a way of trying to suppress the vote. But it won’t work. We’re pushing back here in Georgia. And people are pushing back all across the country.

“We are witnessing what we have seen over the last three-and-a-half years under this administration. And that is a kind of hostility towards communities of color that is unabashed and unembarrassed. We are at an inflection point in this country,” the Rev. Warnock continued.

“In spite of the machinations of Donald Trump and those who do his bidding, including the attorney general, the good news is that we’re seeing a multiracial coalition of people pouring out into American streets, demonstrating, by and large, nonviolently and saying that we’re concerned about the soul of our democracy.”

The attorneys complaining about Mr. Barr’s conduct recognize that Mr. Trump has the right to be defended in a court of law, but that personal defense should be done by his White House Counsel, and not by the Attorney General of the United States.

“We the people who signed onto this complaint are attorneys,” said Mr. Austin. “Many of us have done defense work and we understand defending one’s client vigorously. But Attorney General Barr’s client is the people of the United States. His client is not the President of the United States and his conduct and his statements are … he is acting as though he is the president’s personal attorney and that’s wrong.

“So, with respect to the obvious, you can’t have an attorney general who is violating people’s First Amendment rights to assemble and to speak,” as Mr. Barr did when he ordered peaceful demonstrators removed from Lafayette Park in order to clear the way for Mr. Trump to walk through for a photo op at a nearby church.