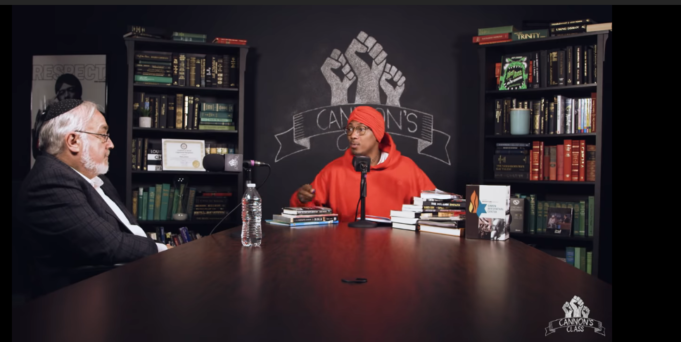 It’s been a little while since celebrity Nick Cannon sat down with Rabbi Abraham Cooper of the Los Angeles-based Weinstein Center for a dialogue following controversy after “The Masked Singer” host was excoriated for an interview with Professor Griff of Public Enemy.

Nick was accused of being anti-Semitic and insulting Jewish people, threatened with cancellation for the interview and connections with the Honorable Minister Louis Farrakhan. Nick was a guest for the Minister’s July 4 message delivered from “The Garden” at his home in Michigan. The attack on Nick came as a host of others were condemned for speaking positively about the Minister’s message, his other words and his years of service to Black people.

The Jewish assault on Nick and efforts to bludgeon him into submission were the latest moves in a long history of anti-Black bullying and coercion by Jews obsessed with the destruction of Minister Farrakhan—no matter the cost or who gets hurt.

In the July 21 interview on “Cannon’s Class,” which is a podcast, the rabbi and the young Black man sat down.

It was clear from the onset that Nick was interested in an honest dialogue, concerned about how his words may have hurt others and finding ways to heal wounds.

All of those are laudable goals and signal a sensitive heart and a young man who wants to do right and be right by putting things on the table examining them, seeing what they are and seeing what can be fixed.

Interesting, though, before the rabbi would even meet with Nick, the entertainer had to apologize and accept a “report” from the Jewish center about Min. Farrakhan. It was eight or nine pages long. But Nick said on camera, “I could send you 90 pages of wonderful things” that the Minister has said and done.

“I’ve been to a city, say like South Central Los Angeles, Compton, handing out free food, knocking on doors during the time of Covid giving to other people with the Nation of Islam. I’m on the board of St. Mary’s in New York Children’s Hospital. Where my personal friend, a rabbi, we go from room to room. … And I’m like, why can’t I get these two groups together to speak?”

He was trying to show how the Minister is generally received by Black America and several times throughout the conversation asked why couldn’t the rabbi and the Minister sit down and talk?

No true answer for why that hasn’t happened ever came from the rabbi.

The Minister’s invitation to talk and efforts to dialogue have happened since 1984 after the Minister was lambasted for defending the Rev. Jesse Jackson from Jewish critics primarily upset with his call for a balanced U.S. policy in the Middle East while running for president.

The rabbi then tossed shade and sleights at Min. Farrakhan saying he went to Libya, picked up $5 million, and shows up in Iran and places where America is hated, or perhaps the “idea of America” is hated. Ugly untruths. Col. Gadhafi, Libya’s late revolutionary leader, gave the Minister a loan to start a line of personal care products to help build Black economics and solve Black problems. Jewish groups and individuals shut down the POWER product line because it was led by the Minister and the Nation of Islam.

As far as the Minister showing up in Iran, it could be said he showed up in a country America hates. It was America that dominated the Middle Eastern nation, kept the sadistic Shah of Iran in power, and kept the Islamic Republic under an embargo since 1979. America introduced hurtful sanctions against Iran and goaded, supported Iraq in a 10-year war against Iran that left one million people dead. Who is the hater in this equation?

The rabbi also discussed the concept of pure evil and how one can forgive personal wrongs but in Judaism one does not have the right to forgive massive wrongs done to others. Great concept. It’s one Black folks should learn. There could be no purer evil than the transatlantic slave trade, which included the participation of Jewish people. So it could be argued that Blacks today don’t have the right to simply forgive those who destroyed their ancestors, more than that is needed.

When Europeans sought forgiveness following the killing of Jews during WWII, they didn’t just offer kind words. Jews got reparations and a homeland which is still being financially supported by Germany and others. Another lesson for Black folk?

More of the rabbi’s wisdom came as he talked about how asserting his agenda came from holding a position of strength.

“If you entered from a position of strength, not of arrogance, of strength, there’s a lot of interesting things that will happen. If you walk into the lion’s den … and the perception is you’re weak. You have zero opportunity to impact,” said the rabbi.

Entering the arena powerless and shackled by pre-conditions have been the requirements the Jewish community have sought to impose on the Minister in this three-decade old battle.

Should he and should we accept such? No.

Truth and reconciliation, which is what Nick seeks, require looking at both sides and hearing the grievances and pain of both sides. But you will never hear my side unless I am telling my own story and defining my own experience. You can’t do that for me. That’s manipulation, not reconciliation.