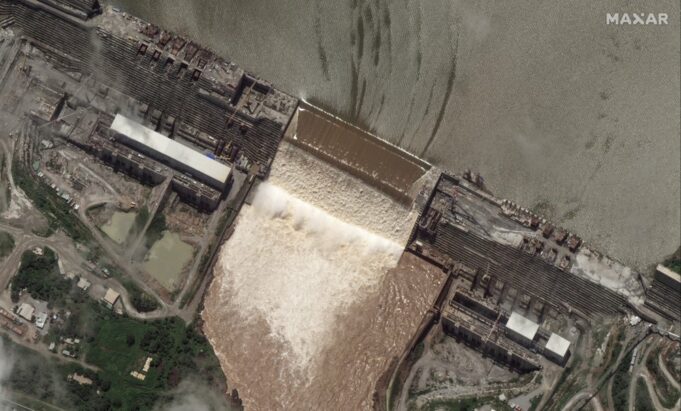 El-Sisi said he seeks a fair and balanced agreement and rejects any unilateral filling of the dam’s reservoir. Ramaphosa said he hopes “intensive coordination” between both sides would hasten an agreement. According to Enterprise Press, the AU sponsored the last round of GERD talks from July 3-13, which ended without the parties reaching an agreement.

The dam, and the ongoing tense negotiations over its filling and its future operation, has sparked much conflict between Ethiopia and downstream states of Sudan and Egypt, which say they fear the giant Blue Nile hydropower dam could alternately cause water scarcity and flooding in their countries.

“Data analysis shows that Egypt will not be severely affected by the first stage of the filling of the dam, says Peter Hany, a professor of irrigation and hydraulics at Egypt’s Ain Shams University. Egypt’s Nile river water supply will only be threatened by the filling of the upstream Grand Ethiopian Renaissance Dam in the case of prolonged drought, new analysis suggests,” reported scdev.net.

In addition, Hany said beginning the filling process this year, rather than next year, was the better option as water levels are currently high in Egypt’s Lake Nasser, which fills from the Nile and provides water for agriculture and energy production.

Recent heavy rains mean the first stage of the dams filling for the year is already complete. Ethiopia’s prime minister announced this after an extraordinary July 21 meeting between the three states.

The dam which has been under construction since 2011, is now holding back water—“and contains 4.9 billion cubic meters of the Blue Nile’s water after this seasons rains,” reported the BBC.

The dam was formerly known as the Millennium Dam and during the planning stage was called Project X. It is considered Africa’s largest hydropower project and the 8th-largest in the world. It will generate 6,000 megawatts of electricity and its reservoir will be able to hold over 70 billion cubic meters of water, which is nearly equal to the flow of the Nile river in one year. The dam is located in the Benishangul-Gumuz region of Ethiopia, on the Blue Nile River, to the east of Sudan. The project, a source of national pride for many Ethiopians, is owned by the Ethiopian Electric Power Corporation (EEPCO).

The impact on the region could be significant. Previous agreements about utilization of the river signed in 1929 and 1959 favored Egypt, which historically adopted an aggressive approach to the flow of the Nile River.

According to conversation.com, “The first agreement was made between Great Britain, as the colonial power in eastern Africa, and Egypt. Cairo was favored over other riparian (situated on banks of Nile River) countries as an important agricultural asset. In addition, the Egyptian-run Suez Canal was vital for British imperial ambitions.” The British riparian colonies included: Sudan, Uganda, Kenya and Tanganyika (now Tanzania) as well as Ethiopia. They had no say in the outcome of the agreement.

Cairo considers the Nile a national security matter and statements—though decreasing—continue to include threats of military action against Ethiopia should it interfere with the flow as set out in both agreements. After independence all the upstream riparian states argued in favor of a new, more inclusive legal framework for governing the Nile River Basin. They argued that they are not bound by these agreements because they were never parties to them.

Outlined in previous agreements is that Egypt would receive 48 billion cubic meters of water annually and Sudan four billion cubic meters. The 1929 agreement granted Egypt veto power over construction projects on the Nile River or any of its tributaries in an effort to minimize any interference with the flow of water into the Nile. In 1959, according to Brookings.edu, “Egypt and an independent Sudan signed a bilateral agreement, which effectively reinforced the provisions of the 1929 Anglo-Egyptian Treaty.”

The 1959 agreement increased the two countries share of water, Egypt’s share to 55.5 billion cubic meters and Sudan’s to 18.5 billion.

In April of 2011, then-prime minister of Ethiopia, Meles Zenawi, laid the foundation for the construction of the Grand Ethiopian Renaissance Dam. Shortly after the prime minister’s announcement, authorities in Cairo launched a campaign against what they said was an attempt by Addis Ababa to interfere with Egypt’s water rights.

Egypt’s president at the time, Mohamed Morsi, angrily stated, while not “calling for war” with Ethiopia, that “Egypt’s water security cannot be violated at all.” He further stated, “all options are open,” and that Egyptians would not accept any projects on the Nile River that threatened their livelihood.

The absurdity of this policy is mind boggling and only made sense under colonial rule, since roughly 85 percent of the water that flows into the Nile comes from the Ethiopian highlands through the Blue Nile. The remaining comes from the White Nile.

This long-running dispute has recently overflowed online, with Egyptians and Ethiopians sparring in online posts over their rights to the Nile’s waters, reported english.alarabiya.net.

Cairo fears the dam would cut into its share of the Nile. Ethiopia says the dam is vital for its development.

In reference to Egyptians’ calls for war on Ethiopia over the latter’s construction of the dam that is feared to lead to water shortage in Egypt, El-Sisi said negotiations could take a long time but threats are unacceptable.

“There is no need for threats, among Egyptian public opinion, of military action. We are negotiating so we can all benefit, and so that no harm is done to us,” he said.