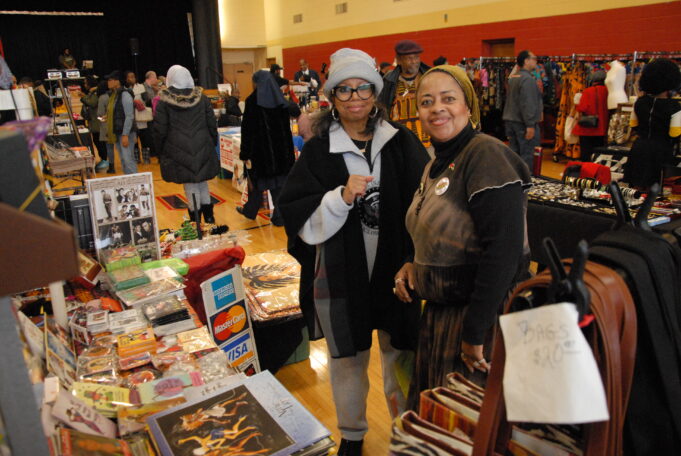 “It’s perfect; we already know that Black businesses have been disenfranchised and hurt and of course this pandemic has put it over the top. Some of our businesses have had to close down permanently and we don’t need that,” Ms. Uhuru told The Final Call.

The Covid-19 pandemic forced 460,000 out of 1.1 million Black businesses in the United States to close from February to April, reported the National Bureau of Economic Research. The 41 percent drop could be a huge setback for Black businesses if they are left to fend for themselves.

Ms. Uhuru said, there is still hope as long as Black communities support one another.

“In order to stop the bleeding, let’s go ahead and let us increase our support exponentially and get everybody to come out one time and let’s go ahead and flood these businesses with support, of course being socially distant and being safe all at the same time.”

Stacey Pitts Caldwell, center director and owner of SMP Creative which offers branding services to small businesses, said that the initiative encourages consumers to keep circulating the Black dollar despite the economic crisis caused by the pandemic.

“This one in particular we saw some really big companies stand up and I think that’s the shift that’s happening so, at the same time, in parallel as Black communities and Black businesses, we have to use our spending power with our Black businesses,” she added.

The ongoing protests against police brutality after the death of George Floyd caused many larger businesses and corporations to update their policies in “solidarity” with the Black community. This shows the power of the Black dollar, continued Ms. Caldwell.

“To be able to identify other Black businesses who either I can work with or I can find use as vendors is really important,” she continued. “It’s really the piece about collaborating,” said Ms. Caldwell.

“I was more than excited and elated because we need these kinds of events that will turn these protests into a practice,” said Toure Muhammad, founder of Black Chicago Eats. “More people are buying Black now and it’s because they see more importance of it in contrast to just fighting against the injustice and racism, and White supremacy,” he said.

Ms. Uhuru’s leadership and leading the way with this initiative “is a beautiful way because it created momentum that will help more people find Black-owned businesses and make it easier to buy Black,” added Mr. Muhammad.

He noted that with the help of technology, Black-owned businesses are able to do business online and with initiatives such as the “Black Business Crawls,” consumers are able to find them.

Supporters will also be able to upload their receipts, identify Black-owned businesses and gather important data with the help of Black Coin’s launch of their web and mobile app.

Ms. Uhuru added regarding the initiative, “[It] brings in financial support, that capital that they need to keep maintaining, keep their employees; hopefully, be able to bring in new employees. And long-term, it makes them stable in our community.”

The project aims to highlight Black-owned enterprises in five Chicago business districts, and it will mark the 26th anniversary of National Black Business Month in Illinois, an official recognition by the state of Illinois in honor of the late Dr. Webb Evans, who was a proponent and advocate for Black businesses.

The Black Business Crawl will happen in Englewood, Hyde Park, Chatham, Austin, and Uptown, and other communities between noon and 4:00 p.m. every Saturday in August and include some of Chicago’s favorite Black-owned businesses.

“The more thriving businesses that we have in our community, the better the economic health of that community, meaning their ability to supply jobs, bring in new jobs and of course when we are supplying more jobs to our community, we’re also reducing crime and poverty. So, it just overall builds a better quality of life in each community,” said Ms. Uhuru.

For more information on the “Black Business Crawls” and to find a Black business near you, visit www.theblackmall.com