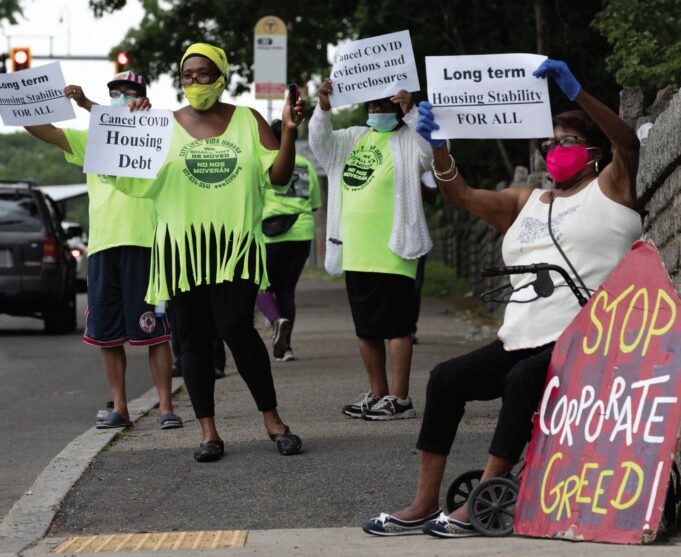 Twenty million Americans could be at risk of eviction by Sept. 30 as eviction moratoriums are lifted, according to an analysis by the Covid-19 Eviction Defense Project, a Colorado-based community group.

That’s one out of five Americans living in rental households. Most at risk are Black and Latino renters, and especially single mothers.

While the report doesn’t give an exact breakdown of people at risk by race or ethnicity, it does present data that says 16 of the top 25 cities with the highest eviction rates have either a large Black population or a HBCU, Historically Black College or University.

“When you look at families with children, they’re impacted, and poor women of color. They’re the highest of the evictions,” said Demetria McCain, president of Inclusive Communities Project, a nonprofit that offers housing mobility counseling programs. “So while the entire country suddenly cares about homelessness and people not being able to pay their rent, at the end of the day, it’s still people of color, Black communities, people who live in Black communities who bear the impact the most.”

On a federal level, the CARES Act Eviction Moratorium prohibited landlords of certain dwellings from evicting tenants or charging fees or penalties against a tenant for not paying rent. But the moratorium has now expired, only lasting for 120 days from March 27 to July 27.

“Cities and states need to extend these eviction moratoriums. Folks who own properties, if they are getting forbearances and they are renting their spaces out, they have to guarantee that they don’t evict the folks living in their spaces. You can’t get a forbearance for your mortgage and evict your tenants,” said Lateefah Simon, a civil rights activist and president of the Akonadi Foundation, an organization out of Oakland, Calif., that is working to end the criminalization of Black and Brown youth.

“Because landowners, they can access forbearance on both single residentials and multi-residential units, and mortgage companies have extended those forbearances for landowners but not for working class renters,” she said.

The activist noted that adding to the problem is the fact that Black people suffer from higher rates of unemployment than their White counterparts and are also disproportionately on probation and parole, preventing them from being hired.

Unemployment could play a role in Black renters being more at risk of eviction. As of July 29, about 50 percent of White tenants say they are highly confident about their ability to pay next month’s rent, compared to only 25 percent of Black tenants and 21 percent of Hispanic tenants, according to data from Stout Risius Ross, a global advisory firm.

“The perfect storm of the externalities of Covid have created a houseless future for tens of thousands of Black people, and it is a crisis,” Ms. Simon said.

She said bias and racism within employment and economic structures are as American as apple pie.

“When we think about in the days and weeks to come these moratoriums being lifted, there’s no new infusion of resources to families that have had to bear the generational weight of racism, poverty and lack of opportunity,” she said. “And for three, four and five months, they’ve had an opportunity to survive this epidemic without paying rent, but that rent doesn’t go away when the moratorium is lifted. It means they owe five months of rent, for the most part.”

“The devastation that we will see coming into the winter months resulting from bad policies, tens of thousands of homeless and/or unstably housed families and individuals who are Black and Brown is something this country has never seen before. Because leaders fail to act. Elected leaders fail to act,” she said.

On top of the federal moratorium being lifted, the $600-a-week unemployment benefit that millions of Americans were receiving as part of the CARES Act expired July 31. House Democrats passed a $3 trillion plan in May, which included keeping the $600 a week through January 2021, but it was rejected by Senate Republicans. Senate Republicans released a $1 trillion coronavirus relief package, titled the “Heals Act,” which will cut the $600 enhancement to $200. That proposal has yet to gain support among all GOPers in the Senate at Final Call press time.

“At least the extension of the unemployment benefits were helping people keep a roof over their head. But with that gone and with the rent coming due Aug. 1, where are they supposed to get this imaginary money? The average person, specifically low-income people, don’t have a huge pot of assets and wealth tucked away in a savings account,” Ms. McCain said.

“Even middle-income people live check-to-check month by month. Once you lose a month’s worth of work, two months’ worth of work or your hours are cut, this is so far as a savings account is going to go. So we’re looking at scores of people being homeless. Is that what this country wants, particularly during the Covid crisis?” she questioned.

Democrats in the House of Representatives are attempting to slow the impending housing and eviction crisis. In late June, they passed the Emergency Housing Protections and Relief Act of 2020, which will set aside $100 billion to emergency rental assistance programs, create a $75 billion relief fund for homeowners and extend the eviction moratorium through March 2021. But the bill is not expected to pass in the Senate.

Some cities and states are doing what they can on their level to help renters.

“In Washington, D.C., Mayor Bowser announced that the moratorium on evictions would continue until Oct. 9, but I know that’s not the case everywhere in the country. These evictions are certainly connected to homelessness,” said Jeanné Lewis, a candidate for D.C. City Council At-Large.

“They’re also connected to childcare, because the cost of childcare is very expensive, especially here in Washington D.C. And with businesses reopening, uncertainty about schools reopening, it would be dangerous to require people to pay market rate rent right now when they also have to think about childcare,” she said.

Ms. Lewis owns a house in North Carolina which she now rents out, and she has volunteered with several nonprofits in D.C. that deal with housing issues, one being the D.C. Tenants Union.

“The D.C. Tenants Union gathered thousands of signatures and called for the cancellation of rent and mortgages during the state of emergency, but they also are asking for a two-year freeze on rent increases and a right to counsel in eviction cases,” she said.

The reason renters across the country are calling for landlords to cancel rent is because when the moratoriums are lifted, they will be faced with big bills.

“The city of Dallas has an ordinance, which pretty much simply delays the eviction process. It doesn’t relieve the renter of having to pay all of the rent that they haven’t been able to pay because they lost their job or because their hours were cut. That’s locally what we’re dealing with, here,” Ms. McCain said.

The city of Chicago has recently expanded its grant program, which originally gave out 2,000 grants for rent and mortgage assistance. The program will help prevent about 10,000 families from being evicted, according to Block Club Chicago, a nonprofit news organization.

Ms. Lewis said emergency rental assistance programs could help small Black and Brown landlords but that ultimately, the system is setup to protect landowners. If someone staying in her North Carolina home doesn’t pay rent, as a mortgage holder, she can negotiate a payment plan with her bank.

“The challenge for landlords is making it until the end of the year. I have had experiences where there were significant maintenance costs, and the rent didn’t cover it right away, so I had to take out a loan or dip into my savings in order to cover them. But I’ve always been able to recoup a lot of those costs at the end of the year. So legislatively, I think that we need to make sure landlords can make it through until the end of the tax year when they’ll be able to recoup some of those losses,” she said.

Emergency rental assistance programs ought to help with that, she added.

“I don’t think the solution right now is evicting tenants, because I believe that will lead to more people experiencing homelessness,” she said. “It will push people, human beings, into homelessness during a health crisis, which is not the moral decision that we want to make as a local government.”

She and Ms. Simon say Black communities can look past government to help themselves.

“I think that Black people have a legacy of doing this. My family, growing up, we’ve had family members and friends who stayed with us when they were experiencing a hard time, for short or long periods of time. I have invited folks to stay with me in my home for no rent for short periods of time when they were experiencing a hard time,” Ms. Lewis said.

“And I’ve seen Black and Brown people do this over and over again. So we already have a community solution and make efforts to take care of one another during difficult times, and I believe that we will continue to do that. But the scale of this crisis means that we’re not going to be able to catch everybody,” she continued.

Ms. Simon said if Black communities waited on the government to save them, Black people would all be dead.

“We’d all be gone. We have borrowed from ourselves. We have collected resources. We have used our faith communities. The diaspora of faith communities in the Black community is strong and clear … the masjids, the temples, the down home churches. They’ve always been a refuge for Black people when government failed to protect them,” she said.

She said Black people need to ask each other for help and also organize, which she defined as holding leaders to task.

“Frankly, every single tax dollar that my mother paid throughout my life is owed to her people. It’s good roads, it’s good schools, it’s good medical care and it’s housing and community and support,” she said. “So we’re not begging. We’re asking and demanding for what’s ours.”