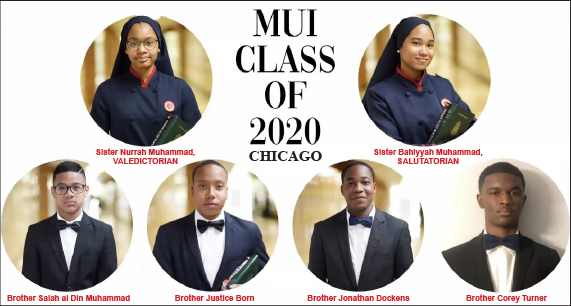 CHICAGO—Six Muhammad University of Islam (MUI) graduating students strode across the virtual stage presented by MUI administrators July 10 for the commencement ceremony for the Class of 2020.

As with many graduations and public events in recent months, the Covid-19 pandemic prevented a public ceremony at Mosque Maryam, but the virtual Zoom event was appreciated.

“It was a bit different, but it was still good and it was what we were able to do. I’m appreciative,” graduating valedictorian Sis. Nurrah Muhammad told The Final Call.

The graduates appeared on Zoom in their caps and gowns, the women wearing white while the men wore red. Family members and guests viewed the proceedings from dozens of screens on the call. The 90-minute affair was spiced with digital techniques and images by MUI interim director Talib Ul Hikmah Karriem, who hosted the Zoom event. This year’s graduating class featured four students who completed their junior and senior assignments in one year.

Following prayer and the pledge to the flag of Islam, procedures that occur each morning of class time at MUI, director Karriem opened the program, saying, “Today, with unique circumstances of the time, the world facing pestilence with the Covid-19 virus, the loss of life … the Mercy of God allows us to lift our heads for these moments of joy as we recognize this precious milestone.”

Director Karriem described MUI as an “educational paradigm and a new spiritual process that will grow the human being into reflections of God Himself.”

“That is the aim of our school, cultivating children into gods. God’s presence is one of the essential ingredients that makes MUI special,” he told students.

During graduate reflections, Bahiyyah Muhammad told classmates to persevere through struggles that lie ahead.

“Setbacks allow us to see if we have the right attitude,” she said. “Setbacks are inevitable, but it’s important to take that risk, that first step … (or) we’ll never know what we’re capable of.”

Nurrah Muhammad had a message for future graduates. “Don’t let anyone tell you what you aren’t capable of doing. You are worth more than what others make of you. You must be imaginative and strong hearted. You must try things that may not work,” she said.

“Life may knock you down but it is your willingness to get up that will make the hardships worthwhile,” added Justice Born. Reflecting on advice Min. Farrakhan once gave, he added, “The thing you love to do is the thing you were born to do. Find that thing that makes you happy. Chase it like your life depended on it.”

“None of us get to where we want to go without people coming into our life. No one becomes someone without somebody,” he said. “It is the expression of appreciation and gratitude that must follow you every step of your journey in life.”

He admonished students to always be thankful and respectful to mom and dad, but “it is God Who takes the credit for creating you and me in the wombs of our mothers. So our uppermost gratitude goes to the God.”

Introduction of the salutatorian and valedictorian was done by school administrator and teacher Lisa R. Muhammad. Musical presentations were performed by eighth grade cellists Khalilah and Sajdah Muhammad. The ceremony closed with a commemorative coin presented to each student by James G. Muhammad on behalf of the Elite 50 Plus and in honor of the late Student Lt. Khalil Muhammad.

We come today in response to the Honorable Minister Louis Farrakhan’s call for a scholarship to be given each year in the name of our ancestor Brother Lieutenant Khalil Muhammad after hearing the resolution presented by The Elite 50 Plus to commemorate the life of Brother Khalil Muhammad each November, James Muhammad told the students.

“We hope that you will not only accept this commemorative coin as an heirloom of great historical value, but as a first step as you acquire financial wealth to purchase silver and gold as a hedge” against a collapsing dollar, he said (See page 31 for additional coverage).

MUI was established by the Honorable Elijah Muhammad during the 1930s as an alternative source of inspirational education for Black children in America who were being indoctrinated with White supremacy and denied the teachings of the knowledge of themselves.

Despite producing students of moral and intellectual excellence, early pioneers in the Nation of Islam were often charged and jailed for “contributing to the delinquency of minors” for keeping their children out of public schools.