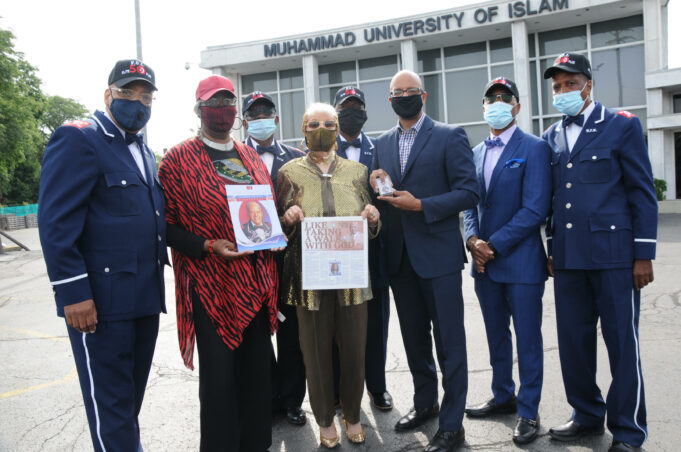 CHICAGO—On December 7, 2019, during the janazah service of Student Lt. Khalil Muhammad, members of the Elite 50 Plus squad announced in a resolution to honor their departed lieutenant each November. Hearing that, the Honorable Minister Louis Farrakhan proposed the honor should come in the form of an annual scholarship to Muhammad University of Islam (MUI) students in Lt. Khalil’s name.

Standing in front of MUI, five members of the Elite 50 Plus personally presented a commemorative silver coin to two of the six graduates and one to student director Talib Ul Hikmah Karriem. Coins were left for the remaining graduates at MUI with their diplomas.

The two-sided, .999 percent silver Troy ounce coin is engraved with a color image of Bro. Khalil on one side and the images of Master Fard Muhammad, the Honorable Elijah Muhammad and the Honorable Minister Louis Farrakhan on the other side. Above their heads is an image of “The Wheel” as foreseen by the Prophet Ezekiel in the Bible and explained as a reality today in the teachings of the Hon. Elijah Muhammad and the Hon. Minister Louis Farrakhan.

“This gift (coin) is a sign, a symbol and an investment,” said Student Lt. Ron 7 Muhammad. “It’s .999 percent pure, which is symbolic of the purity of the hearts of those who founded MUI and the Nation of Islam. It’s symbolic of the pure love they and we have for our students.

“The Minister said he’d close the mosque before he’d close the school. That’s to show the value of the institution. We expect a return from the investment. We want graduates to know the sacrifices of the teachers and administrators. They are not paid large salaries, but they do a major work,” he said.

Bro. Barney Muhammad, Elite 50 Plus member and founder of Watchman on the Wall Ministries, said the coin was “a starting point” in realizing the Minister’s instructions to establish a scholarship fund as well as an introduction to the students on the value of precious metals as the dollar declines in value.

He said the ministry was established based on a statement by Min. Farrakhan in 1988 where he described Bro. Barney as a watchman on the wall.

The Minister said “when you see something you should say something. So, Watchman on the Wall Ministries, seeing we needed social services and support systems in the Nation that we sometimes overlook, we married it with the Elite 50 to begin to provide services for our elders,” he said.

Referring to the coin, Barney Muhammad said several brothers pooled their resources to produce a limited number of them, and portions of the proceeds would go to the Number 2 Poor Treasury, the scholarship fund, MUI and Watchman on the Wall Ministries. The Honorable Minister Louis Farrakhan also received a coin.

“We want the coin to not only be an heirloom, but to be a starting point of realizing that as the value of the dollar falls, precious metals become more important,” he said.

Business entrepreneur Abdul Akbar (Kurt) Muhammad referred to gold and silver as methods of trade and as the dollar collapses, precious metals become more important as means of currency.

Kevin 12X Devers described Bro. Khalil as a “role model and example” and wanted the students to emulate Bro. Khalil’s spirit and work ethic in their future endeavors.

During the 2019 janazah service, Min. Farrakhan said experiencing Bro. Khalil was like “taking a walk with God.” Bro. Khalil was a top seller of The Final Call newspaper and other products of the Nation of Islam and well known in the community.

“I love that Brother Khalil is on the coin because when my children were little, he used to deliver the bottled water to our home. We loved to see him on the streets and experience him and (wife) Sister Maxine at the mosque,” said Sister Staci Muhammad, mother of graduate Nurrah Muhammad.

Sister Maxine Muhammad was thrilled to receive a coin with the image of her husband. Expressing love and appreciation for the guidance of Min. Farrakhan, Sis. Maxine said: “It was such an honor to receive this beautiful token of love that we are presenting to the graduates. I pray that Allah will bless them in their endeavors and keep our families safe. I thank the FOI (Fruit of Islam) and I thank the Elite 50, the squad the Minister put my husband in charge of, and he was on his post until Allah called him home.”

Sister Dora Muhammad was present representing the many MGT and non-registered women who have assisted the Elite 50 Plus for years.

(A limited supply of the coin is available. For more information, please email [email protected])