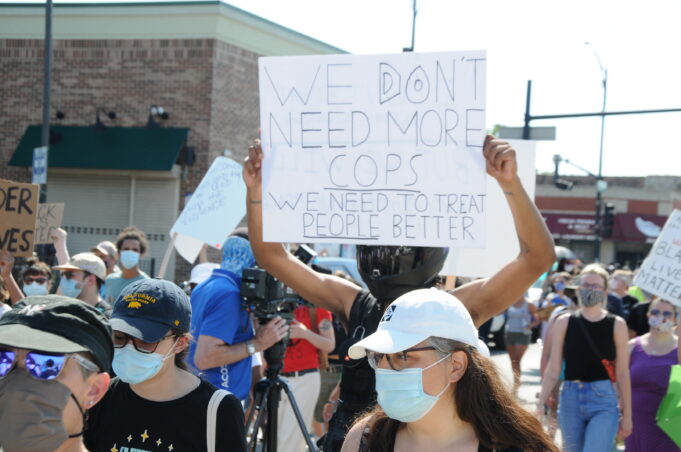 CHICAGO—Eighteen-year-old Miracle Boyd of GoodKids Mad City is holding the city and Chicago Police Department accountable for their mistreatment of protestors during a mid-July demonstration in Grant Park.

During a protest for the removal of Christopher Columbus’ statue, Chicago Police Superintendent David Brown told local news that demonstrators initiated an attack on officers that left 49 injured.

However, in a video posted online, an officer approached Miracle Boyd who was among protestors and smacked her phone into her face knocking two of her front teeth out. Other protestors can be seen on the video being shoved and beaten by police.

“That ain’t right,” said Ms. Boyd during a July 25 peace march held by youth activists. She believes, along with other young activists, that police are constantly proving themselves to be the aggressors.

“We’re not pushing for the officer to get arrested; we’re pushing him to get relieved of his duties. We want him to quit and turn to have a restorative justice circle with me so that he can repair the (damage) that he has caused. We are also suing the city of Chicago,” she added.

The officer in question is yet to be identified. The Chicago Police Department and office of Mayor Lori Lightfoot did not respond to The Final Call’s request for an interview.

Nita Tennyson of youth advocate group The Love Train told The Final Call that the police officer’s actions only fuels the fight for justice.

“For me, my movement, for Love Train, we just support Miracle and what’s she’s saying,” she said. “The idea to stop this from happening again is we have in place a system so that nobody is left alone. We also know that we don’t interact with police, we do not touch them. … We’re going to continue to fight to abolish the police, the police aren’t seeing what they’re doing.”

“It’s showing us that the police aren’t seeing what they’re doing, they’re hurting an 18-year-old girl—not a grown man, not somebody robbing somebody. You don’t have to hurt people to resolve anything.”

Benny Lee, former Conservative Vice Lord leader and co-founder of the National Alliance for the Empowerment of the Formerly Incarcerated in Memphis told The Final Call that police reform starts with Black communities taking care of themselves so that the police are not needed.

“We can’t expect the police to change the condition of our communities, that’s not even in their job description,” he continued.

Many have taken to social media to vent their outrage over the police officer’s behavior.

Illinois State Senator Robert Peters posted on Twitter the night the video posted, “This is Miracle. She’s 18 years old and an organizer for @GKMC18 She is fighting gun violence everyday. Last week I offered her an internship. She is just over 5 ft, 100 pounds. Tonight a police officer beat her. Knocked out her teeth. I’m sad, angry, and disgusted.”

GoodKids Mad City immediately Tweeted a photo of Mrs. Boyd crying after the incident and with her front teeth missing, her mouth bleeding. “WE ARE SO F***ING ANGRY!!! OUR MEMBER MIRACLE WAS BEATEN UP BY THE POLICE TONIGHT AND THEY STOLE HER PHONE!!! @chicagosmayor A RECENT CPS GRADUATE WAS ATTACKED BY CPD! SHE DIDNT DO ANYTHING WRONG! THIS IS HOW YOU TREAT BLACK GIRLS!?Justice for Miracle!!!”

“A Chicago police officer was caught on tape punching Miracle Boyd in the face. A grown man punching an 18 year old girl in the face as she was backing away from him. I’m not surprised anymore. But it still f***ing hurts to see,” wrote Dounya Zayer. Jeff Schuhrke Tweeted, “I heard 18-year-old Miracle Boyd of @GKMC18 speak at 2 solidarity events prior to the @CTULocal1 strike & quoted her for an article. She’s one of Chicago’s most outstanding young people. Last night CPD viciously knocked her teeth out. We really must #DefundCPD.”

Miracle Boyd continues to fight for the police officer who assaulted her to be relieved of his duties. Her group, GoodKids Mad City is also pushing for the “peace book” initiative to be approved by Mayor Lightfoot. The initiative proposes that two percent of the Chicago Police Department budget be given to communities in need, especially those suffering from high rates of violence and poverty.