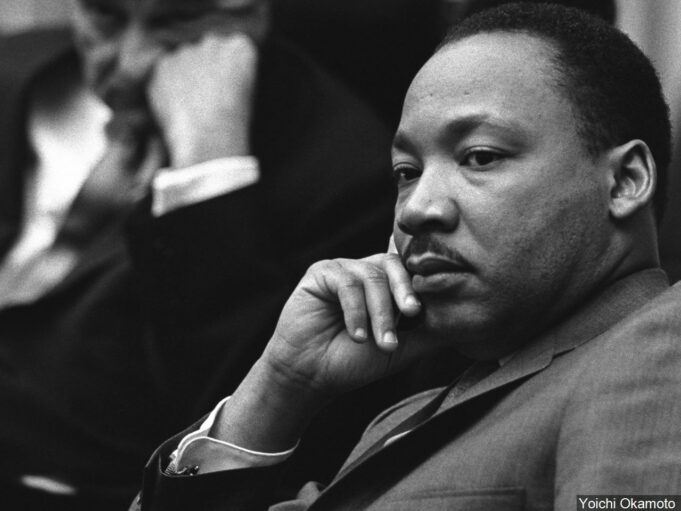 If you listen to the folks at the Anti-Defamation League of B’nai B’rith (ADL); or the folks at the Simon Wiesenthal Center; or perhaps you have read the dubious publications of the Southern Poverty Law Center.  If so, you might have come to the conclusion that Minister Louis Farrakhan is an anomaly, an outlier, a freak of nature, some wild eyed anti-Semitic radical departure from the good, well-mannered Black leaders that White America and the Jewish leadership now approves of.

However, nothing could be farther from the truth.  Black leaders in America are only approved of by the White power structure after they are dead.  This reminds me of a quote from Russian leader Vladimir Lenin who stated in The State and Revolution the following:

“During the lifetime of great revolutionaries, the oppressing classes constantly hounded them, received their theories with the most savage malice, the most furious hatred and the most unscrupulous campaigns of lies and slander. After their death, attempts are made to convert them into harmless icons, to canonize them, so to say, and to hallow their names to a certain extent for the consolation of the oppressed classes and with the object of duping the latter, while at the same time robbing the revolutionary theory of its substance, blunting its revolutionary edge and vulgarizing it.”

The men and women who proved to be good for the cause of the liberation of Black people in America faced vehement opposition from White gentile leadership as well as White Jewish leadership.  And the exposure of the hidden history of the great Black leaders in America importantly reveals that the Honorable Minister Louis Farrakhan is not an anomaly or outlier; he is in the good company of his predecessors within the struggle for liberation.

Frequently I have witnessed commentators and panel speakers invoke the noble name and person of the great and legendary Rev. Dr. Martin Luther King Jr.  His mantra of “the content of their character” and his “I have a dream” speech have been used as convenient slogans by White liberals.  And nowadays, Dr. King is used by Whites as an example of the kind of Black that all the other Black folks should be like if we want to be accepted by the White power structure in America.  But, truth be told, most of us who really understand that “Pharaoh didn’t love Moses” know that if we want liberation, we can’t achieve it with a leader who is loved and approved of by the modern Pharaoh and the modern Egyptians.

Just a brief overview of some of the hidden history of the life and work of the Rev. Dr. Martin Luther King Jr. reveals that he faced serious Jewish opposition from the same groups who oppose Minister Farrakhan.

For starters, Dr. King was spied on by the Jewish leader of the NAACP, Joel Spingarn. Joel Spingarn, for whom the NAACP’s Spingarn award is named, was a spy for the U.S. military.  He specialized in spying on so-called radical Blacks and others the military had deemed “subversive.”  The Nation of Islam’s Research Group website notes:

“Spingarn was hired in May of 1918 and given the rank of major in the Military Intelligence Division (MID). Spingarn ran ‘a small unit of undercover agents’ who were looking for ‘proof of subversion.’ The MID opened 100,000 pieces of mail a week and monitored Black publications. According to the Memphis Commercial Appeal: ‘The documents show Spingarn, who remained NAACP chairman during his tenure at MID, used his post to obtain critical information for MID, such as a list of the organization’s 32,000 members.’”

Among those whom NAACP chairman Spingarn spied on was the family of the Rev. Dr. Martin Luther King Jr.  The Memphis Commercial Appeal states in its March 21, 1993 edition the following:

“The intelligence branch of the United States Army spied on the family of Dr. Martin Luther King Jr. for three generations.  Top secret, often illegal, intrusions into the lives of black Americans began more than 75 years ago and often focused on black churches in the South and their ministers.  The spying was born of a conviction by top Army intelligence officers that black Americans were ripe for subversion. …”

This Rabbi Grafman is the same Rabbi who was quoted in a Harvard study conducted by Suzanne F. Nossel entitled, Weathering the Storm: The Jewish Community in Birmingham, Alabama, During the Civil Rights Revolution, which states: “agency representatives were forced to accept that Rabbi Grafman voiced a sentiment common in Birmingham when he said, ‘the lives of one thousand Negroes are not worth a hair on the head of a single Jew.’”

From the The Autobiography of Martin Luther King, Jr. by Clayborne Carson, we learned of Dr. King’s discovery and confrontation with Jewish slumlords:

“When we were working in Chicago, we had numerous rent strikes on the West Side, and it was unfortunately true that, in most instances, the persons we had to conduct these strikes against were Jewish landlords. There was a time when the West Side of Chicago was a Jewish ghetto, and when the Jewish community started moving out into other areas, they still owned the property there, and all of the problems of the landlord came into being. We were living in a slum apartment owned by a Jew and a number of others, and we had to have a rent strike. We were paying $94 for four run-down, shabby rooms, and we would go out on our open housing marches on Gage Park and other places and we discovered that whites with five sanitary, nice, new rooms, apartments with five rooms, were paying only $78 a month. We were paying 20 percent tax. … The Negro ends up paying a color tax, and this has happened in instances where Negroes actually confronted Jews as the landlord or the storekeeper. The irrational statements that have been made are the result of these confrontations.”

J. Edgar Hoover infamously commented that Dr. King could be the “messiah” among Black people if he gave up his obedience to White liberal tutelage.  No doubt, it was the likes of Jewish liberal and advisor to Dr. King, Stanley Levinson that Mr. Hoover was making reference to, as keeping Dr. King from becoming the Black “messiah.”  An FBI report states:

“Stanley Levinson has told Clarence Jones, another advisor to King, that under no circumstances should King be permitted to say anything without their approving it.”

According to Jeffrey Steinberg in his ADL Caught In Spy Scandal, the organization had a fear and loathing of Dr. King.  Steinberg notes:

“Henry Schwartzschild waited a long time to go public with his personal horror story about the Anti-Defamation League of B’nai B’rith. Today an employee of the American Civil Liberties Union (ACLU), he resigned from a high-ranking position in the ADL’s publicity office in the mid-1960s when he discovered, to his shock, that the ADL was spying on Rev. Martin Luther King, Jr. on behalf of J. Edgar Hoover and the FBI. It was not until the spring of 1993—nearly 30 years after he quit the ADL—that Schwartzschild came forward and told about the League’s efforts against Dr. King. In an April 28, 1993 interview, Schwartzschild told San Francisco Weekly: “They [ADL] thought King was sort of a loose cannon. He was a Baptist preacher and nobody could be quite sure what he would do next. The ADL was very anxious about having an unguided missile out there.”

This shocking overview of the secret relationship between Dr. King and his Jewish opponents affords us the ability to put Minister Farrakhan’s Jewish opposition into proper perspective.  Moreover, as we continue to search through the archives of hidden histories, we are able to conclude that the charge of anti-Semitism is a routine response reserved for the strongest and most popular Black leaders; the men and women who truly have the “messianic” potential to change the world.

Brother Demetric Muhammad is a student in the ministry at Muhammad Mosque No. 55 in Memphis and is a member of the Nation of Islam Research Group. Read more from him at www.researchminister.com. Follow him on Twitter @brotherdemetric.