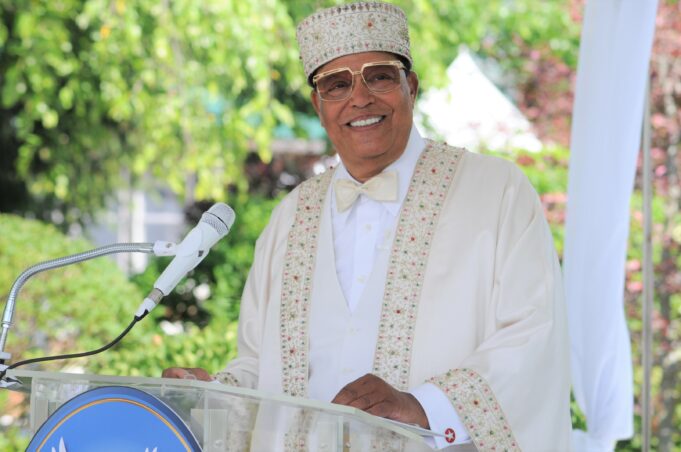 As millions of Muslims, Christians and Jews from around the world tuned in to hear from the Honorable Minister Louis Farrakhan on July 4, praise and adulation  came from all corners of the earth from those tuned in to hear the wisdom, knowledge and understanding about today’s current events coming from the lips of the Man of the Hour, and Min. Farrakhan did not disappoint.

Around the nation and from capitals from the far corners of the earth, internet viewers were not disappointed to hear from their leader. Minister Farrakhan inspired, cajoled, admonished and comforted his legions of followers who waited to hear what God had inspired him to say.

That is, all except that Satanic force coming from certain members of the Jewish elite led by you, sir, in your cacophony of lies, hate and distortions. The Minister spent almost three hours in a searing sun summarizing the brilliant 90 years of history of the most successful independent Black organization in America, the Nation of Islam. However, at the end of his mesmerizing speech all you apparently heard was the warning given to those who call themselves Jews.  At the end of his presentation all you could muster was that old hackneyed word, “anti-Semite.” I challenge you to prove one word of what he said to be anti-Semitic.

Therefore, Mr. Dershowitz, I am not surprised that you have declined to accept Minister Farrakhan’s invitation to participate in a public debate to clarify the false charges of anti-Semitism that you so freely and cavalierly leveled against the National Representative of the Honorable Elijah Muhammad and the Nation of Islam. The Minister has been calling for a showdown with you and the other prominent American Jewish critics who have defamed him and the Nation of Islam for the past 40 years. Your defamation is based on repeated lies manufactured out of complete falsehood and deceit.

Types like yourself can’t stand in the face of truth. You so cowardly say that you would not publicly debate Minister Farrakhan. His challenge to you and others was, not to debate him, he is God’s representative, he plainly and clearly expresses the Will of God. It was to meet in the public square with Nation of Islam scholars equipped to prove that you are nothing more than a rank slanderer, defamer, and one of Satan’s minions.

The Minister’s truthful assertions are succinct and clear: the Ashkenazi Jews are not Semites and you are not native Palestinians. The Minister is not interested in religious polemics, he is after the truth, and the truth is that Ashkenazi Jews are converts to Judaism, not original Hebrew Israelites. They converted from paganism in the land known as Khazaria in 740 A.D. The original Palestinians were a Black people called Natufians. They occupied Palestine when the Ashkenazim were still occupants of the Caucasus mountains. You may want to read “The Chosen People from the Caucasus” by Michael Bradley, or “The Invention of the Jewish People” by Shlomo Sands.

Moreover, in lessons given to all registered Muslims in the Nation of Islam, the Most Honorable Elijah Muhammad teaches us that the original founder of Jerusalem was a Black man by the name of Jebus. In the Bible they were the Jebusites. As the original owners of the land they were extracted from their land the same as the Native Americans  were by the Europeans here in America. When the Minister says you are so-called  Jews and impostors, can you really argue with him? You are in fact interlopers.

You have been one of the leading critics of Minister Farrakhan. You regularly appear on Fox News and in American and Israeli print media spewing venomous falsehoods and outright lies against the Minister. Yet when you were called out to defend yourself against your lies and distortions you become like the Great Houdini. Houdini was a Hungarian born American illusionist and stunt performer renowned for his sensational escape acts.

Your attacks on the Minister have nothing to do with anti-Semitism, they have to do with your response to his uncovering and exposing Satan. You use anti-Semitism as a camouflage to mask your real agenda. You know that people will bristle at the term, and you know they are afraid of its implications so you use that as an adjective to falsely describe him. You are aware that Jesus used the same terminology, “Satan,” to describe the wayward Jews of his day. Was Jesus an anti-Semite? Therefore, if you attack Farrakhan it is as if you are attacking Jesus also.

You have leveled all kinds of charges against the Minister, and as an astute lawyer you know they are false, but when called out to publicly defend yourself you run and hide. What are you afraid of? Here is a face-saving alternative: write your responses to our charges. You are a prolific author, let your pen do in private what you refuse to do in public.

You have defended some of the most notorious criminals in America. Among them are Michael Milken and Rabbi Meir Kahane. As you know, Michael Milken was the junk bond king. The former Page One editor at the Wall Street Journal and Pulitzer Prize winner James Stewart, in his book “Den of Thieves” detailed the massive and consistent criminality of Milken’s operations at the investment bank Drexel Burnham that forced the company into bankruptcy.

Rabbi Meir Kahane, former member of Israel’s Knesset, founder of the Jewish Defense League, a political extremist, and American terrorist, was imprisoned for bomb making, and organized armed patrols of young Jews in Black neighborhoods in New York. Dare we mention Jeffrey Epstein, the notorious child sex offender? And what about Harvey Weinstein?

You castigated former President Bill Clinton for sitting on the stage with Min. Farrakhan at the funeral services of the late Aretha Franklin. You made it sound as if Mr. Clinton’s  presence on stage with Minister Farrakhan legitimates him. Surely you jest. Minister Farrakhan has been legitimized by God and the millions of people under the sound of his voice. From around the world, they respond to his clarion call to return to the ways of God, which are truth and unity. He is honored and respected by the leadership of foreign nations like Ghana and Iran, the Sudan, South Korea, the Gambia, Palestine, and the numerous countries that have received and honored him on his three world tours. Some of these leaders have so much respect for him that they have permitted him to address their government and their military, an act that is unprecedented for world leaders.

Whether or you have a change of heart and mind is immaterial now. You seem obsessed with the Minister, yet you say you consider him of little consequence. If that is the case then why are you so dogged in your pursuit of him, yet fearful of confronting his surrogates? Your failure to respond in any fashion exposes the real Alan Dershowitz. Can you spell the word charlatan?

Jackie Muhammad is member of the NOI Research Group.