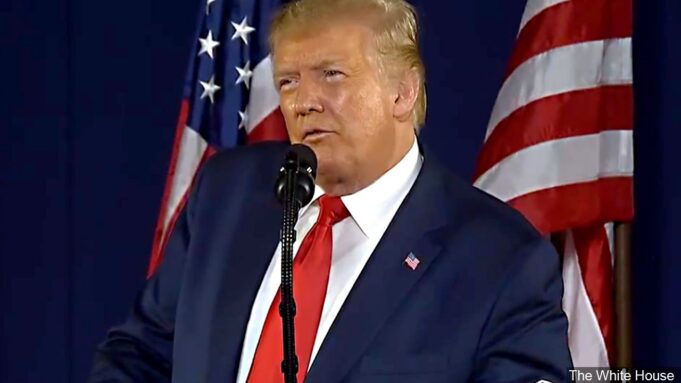 WASHINGTON—In just six months, the United States has descended into a pit of disease, dissension, and economic collapse, fueled by Donald J. Trump’s reelection campaign which is stoking widespread rage and rebellion.

U.S. international prestige is at an all-time low. In a turnaround, dozens of countries have now sealed their borders to travelers from this country, and “Der Spiegel,” Germany’s most influential magazine, recently published a cover story: “Fire Devil: A President Burns Down His Country,” depicting Mr. Trump in the White House Oval Office, holding up a lit match, while the country outside his window is in flames.

Protestors demanding racial justice and an end to police brutality and killings of innocent Black people have taken to the streets by the thousands, from coast-to-coast, in big cities and even small towns. The coronavirus pandemic is raging in dozens of states as the new school year approaches and the president is trying to force schools to reopen and customers back into businesses, large and small, which are failing in record numbers.

“It is no secret, I think that Trump will do anything he possibly can to hang on to office,” retired U.S. Senator Tim Wirth (D-Colo.) said in an exclusive interview. “What’s he going to do otherwise? Get(ting) reelected doesn’t seem to be probable. And if not, how can he go quietly into the night? I suspect he won’t.”

While former Vice President Joe Biden—the presumptive Democratic Party nominee—currently has large leads in public opinion polling on the race, Mr. Trump has refused to say he will accept the results if he loses. And of course, in 2016, he trailed Democrat Hilary Clinton in public opinion polls.

Mr. Trump’s own statements and his conduct have fed the predictions that for the first time in its history, the presidential transition of power in this country will not be peaceful. “Why is that? Why is he doing all of these things?” said Sen. Wirth. “Well, he’s setting the table for his minions to take over the government.

“And if there is a resounding defeat at the polls, which is possible, if the votes get counted, then a lot of (his) people are going to be in the streets, probably protesting this. And a lot of his believers are going to be out there saying, ‘Oh, it was just what Trump said. The votes weren’t correct. They were Chinese ballots,’ or whatever. They’re going to be yelling and screaming about the conspiracy that Trump keeps talking about.”

With his customary hypocrisy, Mr. Trump is using the Black Lives Matter protests which intensified after the police murder of George Floyd in Minneapolis as an excuse to invade cities with secretive storm-type troopers. By contrast, when heavily armed, White protestors invaded the state capitol in Lansing, Mr. Trump said “liberate Michigan.”

“The White nationalists have entered an endgame,” Dr. Greg Carr, professor of African American Studies at Howard University said via Twitter. “They are fully committed to sabotaging and destroying government infrastructure. They’ll do anything to cling to power.”

“Our Nation’s News should be focus(ed) on #Covid19 solutions with over 1,000 dead a day and Respecting the Life of #JohnLewis,” retired Gen. Russel Honore, the military commander who ordered his troops not to shoot vandals during Hurricane Katrina, tweeted. “The #PortlandProtest is a diversion, just what #45 wants while he is out playing golf. 1000 a day dead he’s playing golf.”

As a result, some observers have complained, the U.S. is no longer seen as a nation, but as an assemblage of self-interested individuals. In fact, “75% of African Americans think that Donald Trump is the single most dangerous threat to African American people,” the NAACP said via Twitter.

Experts are warning of a dark winter if the 2020 presidential election results are contested. “On the second Friday in June, a group of political operatives, former government and military officials, and academics quietly convened online for what became a disturbing exercise in the fragility of American democracy,” the Boston Globe reported July 25.

“The group, which included Democrats and Republicans, gathered to game out possible results of the November election, grappling with questions that seem less far-fetched by the day: What if President Trump refuses to concede a loss, as he publicly hinted recently, he might do? How far could he go to preserve his power? And what if Democrats refuse to give in?”

Mr. Trump is pinning his reelection hopes on “running on rage.”

“Right,” Sen. Wirth continued. “That’s what’s going on or what appears to be going on. We’re on that pathway. And they’ve certainly been doing that in Portland, gassing the line of mothers, pushing them back with their batons. It’s just a disgrace.

“(Mr.) Trump is obviously perfectly willing to mobilize them for the purposes of keeping himself in public office. And that’s what we’re seeing, and it’s very dangerous for people and the more people understand it and can see what’s going on, the more able we’re going to be to counteract that with citizen action and with making very clear that citizens understand what’s going on.

“If we talk about this early enough. You know, we can’t wait until October early November to say, Uh-oh, look out, because he will have already done what he’s going to do. It’s a chance to stay ahead of it now. And that’s why it’s important that we have (the) conversation that we’re having right now,” said Sen. Wirth.

In Portland, hundreds of mothers, then fathers, then military veterans took to the streets to protest after the mayor of the city was left struggling to breathe when federal agents hit him with tear gas after a crowd of angry protesters threw shrapnel at his feet as they demanded he resign during a nighttime demonstration.

Mayor Ted Wheeler scrambled to put goggles on after the noxious gas was used on crowds of Black Lives Matter protesters demonstrating against police brutality for the 56th night following the death of George Floyd who took his last breath under the knee of a Minneapolis police officer on May 25.

“I’m not going to lie—it stings; it’s hard to breathe,” the mayor told The New York Times after the attack. “And I can tell you with 100 percent honesty, I saw nothing which provoked this response.”

Since that attack, Mr. Trump has threatened to send his agents—some of whom are accused of being employees of the firm formerly known as “Blackwater” which is owned by the brother of Betsy DeVos, the president’s education secretary—in a “surge” to Chicago, Detroit, Philadelphia, Albuquerque and other cities, all of which have Democratic mayors, in order to as he described it, “own the streets,” and to promote fear and dovetail with his political message of “law and order.”

Citizens, lawmakers, and activists must form a “firewall” against possible abuses of the democratic-electoral process according to Sen. Wirth. “Everybody should be pushing the red alert button to watch out, watch out, watch out, be careful, be alert,” he warned.