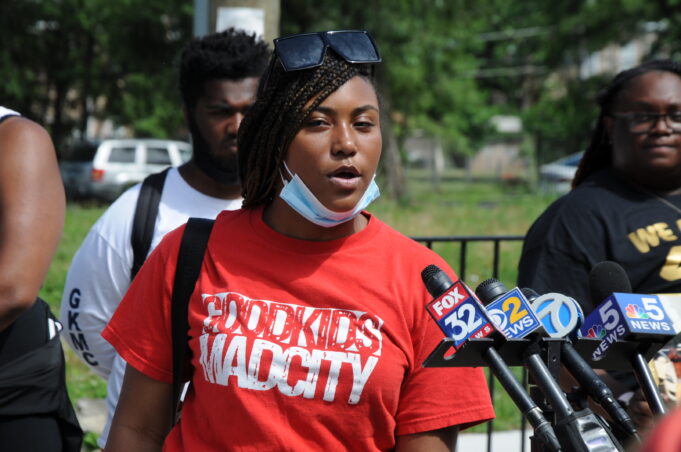 CHICAGO—Youth advocate groups GoodKids Mad City and The Love Train recently took to the streets. Their demand? For city officials to get involved in curbing the city’s ongoing violence.

The young activists conducted a press conference followed by a “love march” July 11. The march began on 64th and King Drive and ended on 55th Street and King Dr. on the city’s South Side.

On the back of the shirt worn by Nita Tennyson, 22, from The Love Train listed friends of hers who were victims of gun violence. “It’s not enough graduations, weddings, baby showers; it’s funerals and urns, that’s all I’ve been to in the past four years,” she said.

“I ended up losing one of my friends this past weekend, and I wanted to do the march, because it’s enough.” Ms. Tennyson was flanked by many others who knew and loved a victim of gun violence.

Nearly 80 people were wounded and 15 killed just over July 4 weekend. Twelve of the weekend shooting victims were under 18, according to local news.

The youth group plans to send their campaign called the “Peace Book” to city and state officials, requesting funds be sent to minority and low-income communities which have the highest records of gun violence.

“We’re trying to get it passed on a city level and even a state level too so that we can really fund our communities and really get our people off the streets from causing harm to us because you never know when it’s going to be yours or you,” said 18-year-old Miracle Boyd during the press conference.

GoodKids Mad City mentor and community activist Kofi Ademola told The Final Call what the “Peace Book” proposal entails. “It’s an ordinance that they want to get passed by city council which will essentially take two percent of CPD’s (Chicago Police Department) budget which comes out to about $32.7 million and to reinvest that into safety and peace, so what that means is they’ll be paying people on the street level that are involved with a lot of the violence and paying them to host peace.”

Other elements of the “Peace Book” plan is to create a commission that will have oversight of high-risk communities and to hire peacekeepers.

“We are currently trying to get (mayor) Lori Lightfoot to give us two percent of Chicago Police Department’s budget so that we can use that money to go to where we have the people right now,” continued Miracle Boyd. “We’re trying to get the ball rollin’ on it, we’re just trying to get the funds.”

In support of the youth advocate group’s efforts is Illinois State Senator Robert Peters of the 13th District. “I think we have an opportunity for us to reimagine safety and justice in our community. It needs to be led by folks seeking peace,” he said during the press conference.

“I’m here to stand and support in solidarity because we know what safety, justice and peace looks like and it isn’t blue lights and closed caption television, it’s going to be led by the community and for the people,” he added.

“My work has shown me that’s why I have to keep doing this and showing me that hope and believing in my people and helping that change be more fluent is actually worth it. Healing in the hood is important because for years we have treated the symptoms without treating the wombs,” said Ms. Simpson.

“We no longer can wait on the system to help us that put us in this predicament in the first place. This is our ‘hood so we must lead the way.”