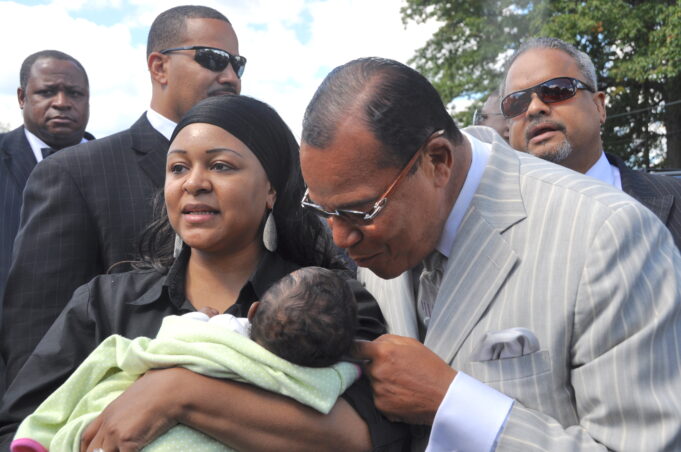 The Honorable Minister Louis Farrakhan has been a friend to women and girls for decades.

The son of a single mom, he grew up knowing the challenges Black women face in a society that denies the Black family freedom, justice and equality. His guidance from the teachings of the Honorable Elijah Muhammad has changed lives.

In 1994 he spoke in New York at a women-only meeting before the historic 1995 Million Man March.

“Every woman that you see that’s no good was made no good by a no-good man,” he told the audience. He warned that women did not have to contend with lazy men. “No matter how handsome he looks,” he said to a thunderous applause, “handsome starts looking ugly when he’s unproductive.”

“He’s a man of integrity.  He’s a man who loves his people. He’s a man who stands for truth. It doesn’t matter who comes against him, he stands up for what he believes,” she said. “He’s a man of God. I have learned more about Jesus Christ from Minister Farrakhan, than the entire time I was in that Catholic Church.”

“When he was coming down the aisle, the first thing that came to my mind was what I had heard my grandparents say about Jesus. He reminded me of everything my grandmother told me about what Jesus represents. I don’t know of any other person that is as humble, that is as loving and caring as Minister Farrakhan. Since then, I have been going to hear him,” she said.

Courtney Sullivan is known on Instagram as @FarmerCourtney.  She’s a Caucasian woman raised by Irish Catholics who regularly speaks about her support for Minister Farrakhan.  Growing up she was always seeking a greater understanding of her faith, a greater connection to Jesus and God.  She was introduced to Minister Farrakhan through recordings by Dr. Khalid Muhammad.

“What a friend I found in Farrakhan!” she said.

“Even though he would say something that would seem to be against White people, (he was) calling Caucasians to accountability or looking at themselves, having self-awareness, looking at the totality of history. I actually felt like he had love for me. I know he is here for humanity.”

Ms. Sullivan said the people who fear the Minister are those in power to oppress the masses. If you are trying to live a righteous life, if you’re trying to be a person of faith and living a certain standard and code of conduct, “then you don’t have to be fearful of what the Honorable Minister Louis Farrakhan is talking about,” she said.

Baltimore’s Radio One Personality Civ Jones first heard Min. Farrakhan at Morgan State University in 2014. The Minister was returning to the university after being banned for several years, she said.

“He told us this generation was going to be the new generation and how we were fearless. He was so fearless and Black consciousness was on display that I just fell in love with the Minister right there,” she said.

Ms. Jones was also impressed by the way Min. Farrakhan addressed rumors that he had Malcolm X killed, and that many in her generation “have this misconstrued view of the Minister on how he had something to do with Malcolm X’s killing.”

“For him to actually explain himself, I was just like, wow, this man is a genius. He’s one of our, like, Oracles, somebody that our generation needed at that time.  He’s was just so fearless,” she said.

“The one thing I love about the Minister is he listens to the young people that are around him. He really exalts the youth, exalts women and exalts people who are not Muslim because I’m not a Muslim, I’m not in the Nation. I definitely hold the Minister in very high regard as somebody we need especially right now.”

From that speech, Ms. Jones got involved organizing people in Baltimore to board buses and head to Washington, D.C., for the Justice or Else event in 2015.

From all walks of life

Min. Farrakhan has found support from women in all walks of life.  During the planning of the Million Man March he appointed Claudette Marie Muhammad as the National Deputy Director to work under National Chair Dr. Benjamin Chavis.  Her first step was to get Dr. Dorothy Height of the National Council of Negro Women involved. She had always spoke highly of Minister Farrakhan, Ms. Muhammad said.

“The Minister titled her ‘The Mother of the March.’  I then met with D.C.’s first lady Cora Masters Barry.  She was over voter registration.  I then reached out to other women who got involved.  They understood, even though the Minister was asking women to stay home that day, that the march was for men to become more productive for their families,” Ms. Muhammad told The Final Call.

“I went to D.C. Congresswoman Eleanor Holmes Norton and her chief of staff at the time, Donna Brazile. They were very helpful. Dr. Maya Angelou wrote a special poem just for the Million Man March that my granddaughter Tiffany read.”

From women in very high places to women on the local level, Min. Farrakhan has found love, honor and respect in the hearts and minds of women around the country.

“I don’t know of a Black man who has been in leadership for, what, over 50 years now.  I do believe that he has the best interest for Black people and has some type of vision of what the world could look like if the Black community were more together,” said Baltimore community activist Ashiah Parker.

“I really appreciate his thoughtfulness. I looked at his fourth of July address and I thought he had great points and great things to take away. I did not grow up in the Muslim tradition and maybe not every point did I agree with, but I definitely look at him as a person that we should look to for guidance while he is still here with us.”

Florence Cox was the first Black woman of Chicago’s Board of Education.  She told The Final Call, “I support him and my family supports him because we see what he does with what is given to him by the Black community. We see that he has taken a group of people, some of whom had been thrown away basically by society, (and told) that they weren’t worthy of anything. He has helped them to transform their lives to the extent that they have become productive societal members and assets.

“He has helped any number of people and in many instances we’ve heard about it from the people themselves, but you never hear him talk about what he does or what he has done.

You hear him teaching people in such a way that what he says can be utilized in the here and now to help them transform their lives,” Ms. Cox explained.

She added, “Now is the time for unity.  People who want unity need to dwell on the issues and focus on the people that are helping our community.  Our communities need everyone that is able to help.  The way the Nation is able to move in the streets with no weapons, how can we ignore a major entity in our community?”

Mitty Collier has an historic career as an R&B singer with major hits and now as the pastor of Chicago’s More Like Christ Christian Fellowship Ministries.  To her, Minister Farrakhan “has really been a fabulous teacher. Even though I’m not a Muslim, he has never said one time to me anything against my Christianity. He has always supported me in terms of my ministry when I needed him to come and speak.”

“I’ve been at his table many times and he always fascinates me with the word and the depth that God has given to him to explain the word. I’ve never heard anybody who could really put the word of God the way that he does and make a woman feel so precious in the sight of God and how we are to be treated,” Ms. Collier said.

“He has never disrespected me. I have so much respect for him and the way that he teaches even the men. I respect how he goes to them and picks them up out of the miry clay and helps them to get cleaned up so that they can help somebody else.  He’s just a precious man of God to me.”

From around the globe in Accra, Ghana, based at the historic W.E.B DuBois Center, Dr. Erieka Bennett, Ambassador for the Diaspora for the Africa Forum, told The Final Call, “He is our leader, he is our teacher and we thank God for him.”