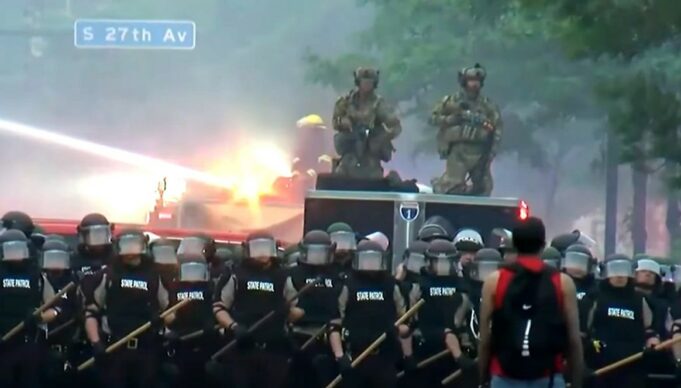 [Editor’s note: The suffering of the Palestinian people from Israeli attacks for well over a month, the slaughter of unarmed Black teenager Michael Brown in Ferguson, Missouri by a White policeman which ignited social unrest/protest so intense that the state’s National Guard has enacted, as well as Blacks-killing-Blacks in the city of Chicago anguished the Honorable Minister Louis Farrakhan so much so that he was guided to deliver this address from Mosque Maryam in Chicago, on Sunday, August 17, 2014. Ongoing racial strife, police brutality and murder, unrest and rebellion in the United States have prompted us to reprint an edited version of his words which are more important today than yesterday. The Final Call urges readers to order this message in its entirety on Digital Download, DVD and CD, please call 1.866.602.1230, ext. 200, or visit store.finalcall.com.]

I bear witness that there is no God but The One True God Whose Name is Allah.  He has no partners, no associates.  He is One; He is indivisible.  He is from The Beginning, and He will be with those of The Righteous through the ending of this world, and The World of Infinity that comes in after this world of evil is finished. …

And whether you believe it or not, you Black people in America—the despised, the rejected, the unloved, the unwanted, the suffering People of God: You are His Choice.  And that’s what the trouble in the world is all about.

I want to have a serious discussion with you; and I ask only of you to lend me your ears.  I need your help.  For this message, some of the finest minds in Chicago and other places, male and female, were in the audience; but also in the audience were the most precious group of young people that are the target of a wicked conspiracy that has emanated from the government of America itself.

I warn you that something terrible is about to go down, and Ferguson is a sign:  A microcosm of “the macrocosm.”  The killing of Michael Brown is one in many—some we know about and some we don’t know about; but every city and town where Black people live, Black men are being shot down by police.

Witnessing the events that have transpired and are transpiring, there’s not a lot for me to say to you that I haven’t already said.  It’s just that you have not been listening; you treat me like a “lovely song” …  (Please read the Book of Ezekiel, Chapter 33, verses 30-33).  “The Minister is coming out!  Let’s hear what his song is today,” and after I speak, you applaud and then go back to your crazy way of life.  I watch our moral conduct spiraling down; and I see the fratricidal conflict where Chicago is the epicenter of murder—Black-on-Black murder.  Today, I want to examine not just us on our level, but where all of this is coming from, so that my young brothers and sisters will know that they are the target, and are unknowing conspirators in a plan to destroy Black youth and destroy Black people.

I cannot talk about “world situations” and not shine the light on what’s happening to Chicago; Allah wants me to speak to the situation here and in the world with clarity and guidance.  Not that I can stop what He is allowing the wicked rulers of the world to produce, but to warn the innocent of what the wicked rulers and their wickedness is finally bringing about that will impact all of us in the fulfillment of prophecy.

You may say, “Well, how am I a part of such a conspiracy?”  The prophecies of the Bible and Qur’an are real.  And most of you who disrespect the prophets and disrespect scripture is not because by nature you are like that; however, sometimes the way we represent God is so reprehensible that in the eyes of our young people “preachers” look like pimps.

Our leaders, teachers and preachers

Leadership is afraid of our young people:  You don’t go out among them, and you don’t know what’s going on in them!  You are only seeing the repercussions of something that didn’t start with them.  Leaders, teachers, preachers:  What is your role?  Are you just to preach and entertain the people with song, music and preaching of “yesterday,” not dealing with what is happening today?

We who are leading the people live better than the people we lead.  That’s not “bad,” but it’s horrible if the sheep is sheared and we are wearing the wool, but are not leading the sheep into green pasture.  That’s a problem.  And it’s not about church on Sunday, Jumu’ah prayer on Friday, Shabbat on Friday night and Sabbath observance on Saturday; it’s about what are you doing after prayer!  This “incestuous relationship” that we have with each other:  We meet in the masjid, we meet in the synagogue, we meet in the church—but the problem is in the streets.

In the Bible, in the 3rd Chapter of the Book of Ezekiel, verses 17-18, it reads: “Son of man, I have made you a watchman unto the house of Israel: therefore hear the word at my mouth, and give them warning from me.  When I say unto the wicked, Thou shalt surely die; and you give him not warning, nor speak to warn the wicked from his wicked way, to save his life; the same wicked man will die in his iniquity; but his blood will I require at your hand.”

And as the scripture in Isaiah 62:6 mentions “watchmen on the wall”:  Who is watching what’s happening to our people?  Who is watching the policies of America being enacted by our president, the Congress, the National Security Agency (NSA), the Central Intelligence Agency (CIA), the Federal Bureau of Investigation (FBI)?  Who is watching?  Who is “The Watchman” that will stand on the wall and warn the people of what you see and what is coming?

The anguish that I feel started with Gaza:  Helpless Palestinians against the armed might of Israel with weapons given to them by America.  You tell me about “terror.” …  You tell me how helicopter gunships, F-16s, tanks and an arsenal of armaments that are designed on explosion to rip human bodies apart—you tell me who the real “terrorist” is.  I’m not a Jew.  I’m not a Palestinian.  I’m a human being.  But if my heart, as a human, does not ache for the suffering of our people—fellow human beings, fellow sufferers and travelers on the Earth—then I am dead morally and spiritually. …

Hamas is not giving up.  It has come to the point where they are willing to die rather than continue to live under the oppression that they have lived under since 1948.

You know, human beings can adapt to many terrible situations—we proved that; but even the most adaptable human being, at some point, will say, “Enough is enough.”  …

Ferguson is “a microcosm of the macrocosm.”  Can you imagine that Ferguson, being 67 percent Black:  Out of six city councilmen, five are White; and out of 53 policemen, three are Black?  Now, something is wrong with that picture.  And I have to ask myself, “What happened to the voting rights bill; what happened with ‘one man, one vote’ ”—that with 67 percent of Black people you have to live under a White mayor?  With 67 percent of Black people, you can’t make the laws that govern that town?  Now if that is the condition, let me set the stage for Michael Brown.

I don’t know about the store that the media is reporting he strong-armed somebody, and took some cigars, but I know this:  When you live in the ’hood, you don’t control any economics.  So you have Arab store owners that don’t give a damn about you, and have no respect for you, and you have Koreans, Chinese, and Indian store owners, and other people all in our community taking the money out, but not giving a damn thing to this community.  I imagine that Blacks under those conditions suffer every day, but not one time did they break a window.

There’s been over, I believe, 300 arrests of Black people in that city, and just fewer than 40 Whites have been arrested.  Do you see “the picture?”  But that town is a microcosm of what’s going on all over the country:  Black men are being shot down, but the courts don’t give us justice.  The coroners are the brothers of the killers, so you don’t know what happened to Michael Brown.  The shooting of this young man has triggered, now, a response that has been building.

So when I spoke with some of the attorneys and the father of Michael Brown, I told them, “Don’t let what some of our people did in anger cause you to focus on that and not the real issue.”  I said, “All of you that have children, all you mothers; all you fathers:  When you do something that your child doesn’t like, they don’t sit peacefully by, they’ll show you an ugly face; they’ll go and slam a door and they’ll even raise their voice at you, because they feel you did them some injustice.”  “Injustice” brings about a response.  Whether justified, or not, that’s to be determined. But the need for justice is in the eye of those who feel deprived of it.