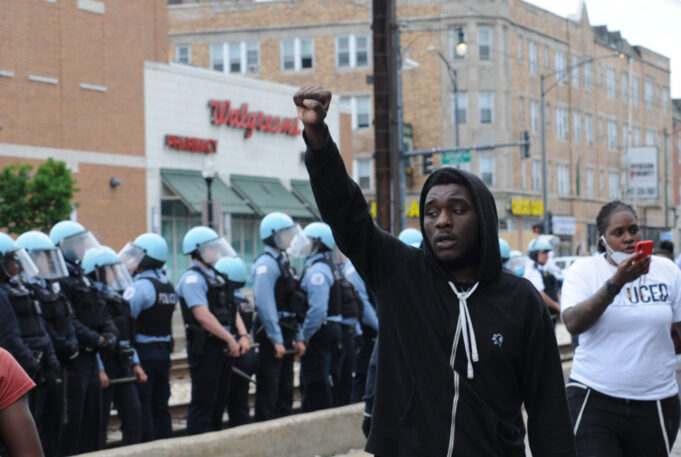 MINNEAPOLIS—Unrest gripped the city in the aftermath of the death of George Floyd, a 46-year-old Black man, in the custody of a White police officer. His Memorial Day death ignited deep anger, frustration and outrage that included an outbreak of rioting and rebellion, and a massive police presence composed of officers around the state, the National Guard and city cops.

But the Twin Cities, which includes nearby St. Paul, were the epicenter of an explosion in 30 cities across the country with half the states in the country having activated their respective National Guard units. In Washington, D.C., President Trump vowed to send in military personnel if governors were too weak to stop those who he has derided as lawbreakers and looters.

His words helped inflame an already fiery mood in the United States, with businesses and buildings robbed and destroyed from coast to coast.

Speaking June 1 in the Rose Garden of the White House, Mr. Trump declared himself the “law and order president,” and invoked Insurrection Act of 1807, saying he would end civil unrest and use military personnel to do so—especially if governors did not act. He hardly mentioned police misconduct, racism, brutality or justice for the man whose death has inspired one of the watershed moments in U.S. history.

Analysts and some governors rejected the president’s words, saying he had no authority to deploy U.S. soldiers on America soil without the approval or invite of governors.

Mr. Trump, on a call earlier in the day, blasted governors as too weak, saying they must “dominate the streets,” and an “overwhelming military presence” was needed.

The president, in the Rose Garden, said he would protect peaceful demonstrators and bring in thousands of troops, including military police. Yet U.S. Secret Service Police, National Guardsmen, and U.S. Park Police used tear gas, flash bang grenades, pepper balls and rubber bullets against peaceful protestors in a park opposite the White House because the president wanted to walk to nearby St. John’s Episcopal Church for a photo op. The church had been set afire over the May 31 weekend.

Two helicopters were airborne, and a massive security presence accompanied the president, according to a CNN correspondent reporting live from the scene. Mr. Trump stood in front of the boarded-up church holding up a Bible, saying America was a great country, would be made greater and it would not take long. He was joined by Attorney Bill Barr, Defense Secretary Mike Esper and some members of his staff. Everyone was White. An Episcopal bishop condemned the use of the church as a political prop, saying the president’s talk of military might and disrupting peaceful protest were against the teachings of Jesus.

Drones and military helicopters circled the southside of Minneapolis as family and friends of Mr. Floyd, who came up from his hometown of Houston and its Third Ward, were on the scene. They came out to the place where a nine-minute video captured the death of Mr. Floyd. His life ebbed away while he begged for relief, called for his mother and told an officer whose knee was jammed into his neck: “I can’t breathe.” Three other officers stood nearby and did nothing despite calls from witnesses who urged the officer to remove his knee from the neck of a man who was dying.

Despite a county coroner’s report to the contrary, experts contracted by lawyers for the Floyd family said he died because of asphyxiation, not any underlying health causes, with oxygen cut off from his brain.

Former NBA player and longtime friend Stephen Jackson, who referred to Mr. Floyd as “Twin,” vowed to do everything to get justice. “My brother’s death won’t be in vain. When you hear George Floyd, it’s going to be the name of change. It’s time to get some policies changed so these laws can be equal. Y’all ain’t going to be treating us like shit. Or we’re going to burn everything down!” he declared angrily. Many in the crowd cheered.

“Riots are the music of hate because they are not hearing us. So, we got to riot, they got to feel our pain. That’s the only way y’all are going to hear us. This shit really hurt, this is our brother, this is my real pain, I don’t have no pride in being here. I don’t have any pride in crying. This is real, so if you’re not going to stand with us, get the fuck on, and I mean that! We from Texas, this is our family and we appreciate all of you for coming here,” said Mr. Jackson.

Other Floyd family members stood with him on that Saturday and two days later, some family members returned to again honor George Floyd’s memory and one of his brothers called for peaceful protests as America spiraled out of control.

Many department stores and businesses in Minneapolis and St. Paul were hit. Some snatched merchandise, others stacked cases of water, food, Pampers and other supplies on sidewalks for the taking.

“I’ve been in this city and in the struggle since 1966 and I have won all the lawsuits I’ve had against the city of Minneapolis, but I have lost every case against a White man and police. I have never seen a White police arrested,” said Spike Moss, a longtime Black community activist and Twin Cities resident.

“This is the first time I’ve seen a White police officer charged for killing a Black person here in Minnesota. There’s a big difference between us and the generation out there protesting now. We were organized, structured, determined and had a goal compared to our youth today. They are angry, hurt, lost and confused,” he said.

Shortly after huge protests against the officers involved in the death of Mr. Floyd, all four were fired and Mr. Chauvin was charged with third-degree murder and second-degree manslaughter. A court appearance was postponed until June 8 as angry protestors and Floyd family members demanded that all the officers be arrested and charged.

A lack of confidence in the Hennepin County, Minn., prosecutor led the governor to hand over the lead prosecution in the Floyd death investigation to state Attorney General Keith Ellison. Mr. Ellison said, via Twitter, “We are going to bring to bear all the resources necessary to achieve justice in this case.”

He also admitted getting any conviction of a police officer was difficult, and evidence would be challenged at every point.

Activists from around the country came to Minneapolis to show support for the demand for justice.

Anthony Shahid, who was a leading advocate for justice for Mike Brown, Jr., who was killed in 2014 by a White officer in Ferguson, Mo., drove up with the young victim’s father.

The third-degree murder charge was B.S., he said. “The simple fact is that for 8 minutes and 26 seconds, he had his knee on Brother George’s neck. The whole entire time. This wasn’t something that he didn’t know he was doing; he was clear with what he was doing and was posing. He posed no differently than when a person shoots an elephant. He posed no different than when a person shoots a giraffe. He posed just like they did when (Whites) took pictures after they were burning us up and when they were hanging us. He posed the same goddamn way! So, I feel as though it should be first-degree murder,” said Mr. Shahid.

Mike Brown Jr., whose unarmed 18-year-old son was shot to death by a cop, said, “We traveled to Minneapolis to show awareness and show strength, because to me presence is everything. I want to let the people know that I’m not too busy. I have to come out and support everything that’s going on and show my love from St. Louis to Minnesota.”

“I feel that what you are seeing happening everywhere is the signs of the ancestors. Some things people do differently to show respect and homage to families. Overall, I’m not mad at no one; the way you express yourself is the way you express yourself. I’m all for it and I’d never down anyone that feels a certain type of way. I’m glad that the world is watching,” he said.

An upset Minneapolis business owner whose shop was ransacked, told the Final Call, “I’ll be honest with you. I feel like we have racism problems in the city of Minneapolis or in the state of Minnesota in general and it didn’t just start. This has been a problem for a long time. If you can recall about a year or so ago there was a police officer that shot a White lady, he was a Somalian guy and they gave him twelve and a half years in prison. Well, I believe that is part of the issue today. I believe that everybody got a different reason for being out here and I believe that this is not just about Floyd anymore. Because the other officer got twelve and a half years then they need to give this officer life in prison and then put the rest of the officers in jail,” said Tawana Jackson, owner of Tweak the Glam Studio. Mohamed Noor was convicted and sentenced in June 2019 for the murder of Justine Damond, a White woman from Australia who was living in Minneapolis.

Still the painful episode wasn’t over even with thousands in the streets of America: A Twitter post, which was attributed to Los Angeles police radio traffic, included officers saying it was time to start “shooting to kill” as President Trump had said and to get a bounty for killing Blacks and Mexicans. In Louisville, a police chief was fired after cops shot and killed a Black business owner, David McAtee, 53, but failed to have their body cameras activated. Officers had been ordered to activate cameras following the March police killing of Breonna Taylor during a botched raid. The officers and National Guardsmen, who allegedly were fired, were trying to enforce a city curfew. The cops involved were placed on administrative leave.