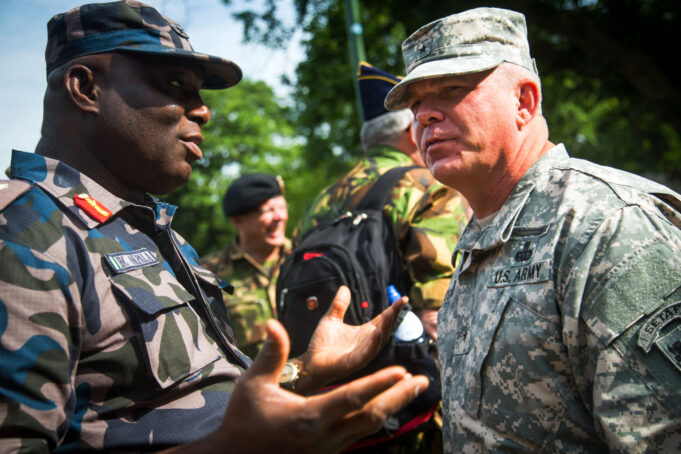 In a speech unveiling U.S. strategy to counter Chinese and Russian influence in Africa, National Security Advisor John Bolton, a “notorious hawk who advocates the unilateral wielding of U.S. might,” accused Beijing and Moscow of  “deliberately and aggressively targeting their investments in the region to gain a competitive advantage over the United States.”

Delivered at the American conservative public policy think tank, the Heritage Foundation, Bolton accused China, without data to back up his accusation, of “predatory practices” on the continent of Africa. Bolton, according to assistant researcher at the Institute of European Studies, Chinese Academy of Social Sciences Zhang Chao, “Bolton mentioned China 17 times through the speech, during which he enumerated Chinese ‘sins’ in Africa and declared that the overriding target of the U.S. strategy is to counter Chinese influence across the continent.”

“Since the 1960s, Western nations, the IMF, World Bank, Paris Club, etc., have ‘looted’ Africa of hundreds of billions of dollars in bloated debt payments and through the manipulation of currencies, and terms of trade.”

Representing the Trump administration’s new policy in Africa, Bolton claimed the  Chinese government was using bribes, opaque agreements and strategic use of debt to hold states in Africa captive to Beijing’s wishes and demands. Long on rhetoric and short on substance, Bolton announced a new program, “Prosper Africa,” to support American investment across the continent and provide alternatives to Chinese projects.

According to Bolton, without explanation, he claimed this initiative would boost U.S. private sector investment across Africa with a goal of offering  “high quality, transparent, inclusive” trade.

Ian Taylor, a professor in International Relations and African Political Economy at the School of International Relations at the University of St. Andrews in Fife, Scotland, was “curious” as to why Bolton was “lumping Russia and China together as being some sort of strategy threat to American interests in Africa, given that Russia itself, its investments in the continent and its political profile is much less than that of China.” So other than a U.S. need to continue to taint Russia as an enemy, he feels “the coherency of the approach is problematic.”

The fact that China’s increasing aid to Africa includes assistance with infrastructure projects “has raised global attention,” resulting in China being tagged with terms like “neocolonialist” and “rogue donor,” says Chao. He adds, “Despite these negative images, Chinese aid might not be as evil as often assumed. A number of rigorous studies—which were notably absent in … Bolton’s accusations—have demonstrated the Chinese aid is fairly positive in facilitating the development of recipient nations.”

Examples Chao cited include the African Development Bank Group’s analysis. In 2011 it concluded that Chinese engagement with Africa could be beneficial both to China and the African continent. Another study by AidDate from the Virginia-based College of William and Mary in 2017 found Chinese aid is effective in boosting economic growth, including growth for African countries and does not hurt the effectiveness of grants and loans from Western givers.

Some analysts caution, according to Voice of America, “against looking at the African continent as a battleground for U.S. competition with China.”

“It can undermine our actual strategies with many countries in Africa by seeing them through the prism of competition,” senior fellow Michael Fuchs at the Center for American Progress, who served as deputy assistant secretary of state for East Asian and Pacific affairs in the Obama administration told Voice of America.

Claims that China is an “economic predator” in Africa, pillaging natural resources and dragging it into debt crisis are “as false as they are sensational,” the Xinhua official Chinese news agency said in a commentary earlier this year.

According to African economic and political analyst Lawrence Freeman, “It is more than ironic that the West is complaining about Africa’s debt to China. Since the 1960s, Western nations, the IMF, World Bank, Paris Club, etc., have ‘looted’ Africa of hundreds of billions of dollars in bloated debt payments and through the manipulation of currencies, and terms of trade.”

Of note is the fact that the anti-China accusations including that of Bolton are fairly recent. An April 18 Financial Times article, headlined “African nations slipping into new debt crises,” did not mention China one time as the source of the continent’s debt crisis. In fact the FT’s piece is critical of the International Monetary Fund and World Bank. “The increase in debt should have raised all sorts of flags and triggered triage, but it didn’t. Neither the International Monetary Fund nor the World Bank sounded the alarm,” the London-based financial paper reported.

Bolton during his speech claimed that China was taking over Zambia’s national power and utility company, Zesco, due to a debt of over $6 billion. But Zambia publicly denied Bolton’s claims saying the utility was never provided as collateral and its debt to Beijing was only $3.1 billion.

“It is regrettable that such information can come from such a high ranking official. In fact, Zesco is not within the scheme of Zambia’s debt to China,” said Zambia’s presidential spokesman Amos Chanda.

Bolton during his speech said, “In developing our strategy, we are revisiting the foundational principles of the Marshall Plan. The Marshall Plan furthered American interests, bypassed the United Nations, and targeted key sectors of foreign economies rather than dissipating aid across hundreds of programs. Our new foreign assistance strategy will ensure that all U.S. foreign aid, in every corner of the globe, advances U.S. interests.”

Ismail Akwei in Face2FaceAfrica commentary titled “The U.S. has proven its need for Africa as pawn to hurt China and Russia,” begs to differ with Bolton.

“These measures could rather harm U.S. trade interests in Africa which China and Russia are already beneficiaries. An example is a decision by Donald Trump to suspend Rwanda’s duty-free benefits to export cloths to the U.S. under African Growth and Opportunity Act (AGOA),” he wrote.

Because of the East African country’s refusal to reduce tariffs on used clothing imports and to cancel plans to ban used clothes, imports by 2019 Rwanda was suspended.

The Rwandan government’s response to the suspension was simply to help affected local garment companies “transition to new markets” as they are already being introduced to European buyers.

“The rest of Africa could also look elsewhere for aid and stop the U.S. from using them as pawns in its war against China and Russia. The days of being puppets in the hands of the West are … over as the continent is implementing structural reforms towards economic independence,” wrote Akwei.