[Editor’s note: The following article contains excerpts from a radio message the Honorable Minister Louis Farrakhan delivered on December 27, 1978. The Final Call exhorts the reader to study Minister Farrakhan’s words of warning and guidance for they are relevant to the time we are now living in, and what must be done. To order this historic message in its entirety on MP3 or CD, visit store.finalcall.com, or call 1-866-602-1230, ext. 200]

My beloved brothers and sisters, it is a great honor and privilege for me to have this opportunity once again to come to you in your homes or in your cars, or wherever you may be listening to this particular broadcast, to bring you the Life Giving, Life Saving Message of the Honorable Elijah Muhammad. For if there ever was a time that we needed the message of the Honorable Elijah Muhammad, that time is now, for we have entered into a great time of trouble.

It is written in the 12th Chapter of Daniel, the first verse: “… and there shall be a time of trouble such as never since there was a nation even to that same time …” 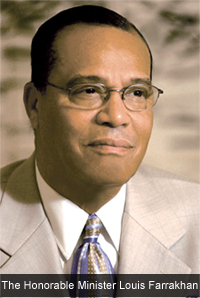 My beloved brothers and sisters, it is written in the 21st Chapter of Luke, verses 25-26:

“There shall be signs in the sun, the moon and the stars and upon the earth distress of nations with perplexity; the sea and the waves roaring; men’s hearts failing them for fear and for looking after those things which are coming upon the earth: for the powers of heaven shall be shaken.”

Distress of nations with perplexity: When we say “perplexity,” we mean great confusion.

My beloved brothers and sisters, look at the confusion among those who are entrusted with the responsibility of leadership. The leaders are confused and at their wits end, for the problems are so great that they have no solution to the world’s problems.

There is nowhere that we can go on this Earth where we do not find great dissatisfaction.

They see the tidal wave of human problems, crashing down upon civilization, destroying the very institutions that civilization is built upon. They see ruin and desolation and destruction coming. And because of this, men’s hearts are failing them with fear.

The scripture teaches the powers of heaven shall be shaken. My beloved brothers and sisters, this signifies that the rulers of the world, and their powers, shall be shaken.

The powers of heaven signify the powers in religious leadership. Rome is shaking at what they see coming. Mecca is shaking. Every religious quarter on the Earth is shaking.

The religious leaders are at their wits end. They have no solution to the problems. They search the pages of scripture. They can find it written in the scripture, but they cannot extract the Divine Wisdom in God’s Word to find the healing balm for the wounds of the nations.

And so, one old prophet said that there would be a famine on the earth. Not a famine of bread, but a famine for the hearing of the Word of God. And even though the Word of God is being preached all over the world, yet, the peoples’ souls are starved, because the religious leadership is bankrupt! And it has no answers to the perplexing problems of the time. And so the churches are filled with music—but no answers to the human problems of their suffering congregations.

Oh, my beloved brothers and sisters: We have entered that Great Time of Trouble.

If the leaders are confused, what about the people?

“This know also that in the last days perilous times shall come, for men shall be lovers of their own selves, covetous, boasters, proud, blasphemers, disobedient to parents, unthankful, unholy, without natural affection; truce breakers, false accusers, incontinent, fierce, despisers of those that are good; traitors, heady, high minded, lovers of pleasure more than lovers of God; having a form of godliness, but denying the power thereof …”

Pick up your newspapers! Turn on your radios! Look at your television screen! What is the news about? Murder, rape, robbery, mayhem is the order of the day! What is happening? It is a time of trouble.

The stress and the pressure is so great in the families among men, that little incidents in the home are sparking great quarrels and conflicts. The family members purchase a gun to safeguard that home against an intruder, a robber. And then, with a small incident, the gun is drawn, and a husband murders his wife, or a wife murders her husband! Or the children murder their parents! This is the order of the day! It is a time of trouble.

The stress and the strain is so great upon the people. The increase in child abuse is staggering! Men and women taking out their frustrations on their innocent little children, burning them to death, beating them to death, drowning them in the bathtubs. What a time of trouble.

The Honorable Elijah Muhammad has taught us that Almighty God has been sending His prophets, His guides, His warners into the world; warning men of their course of conduct. And the nations and the rulers and the kings, who have felt the threatening of their power, have murdered God’s prophets! Jailed them! Beat them! Made mockery of them!

And some they have killed; and then taken that prophet’s message, and twisted it out of shape! Deceived the people! And so there’s a madness among the people that is threatening ordered society!

The Holy Qur’an teaches us that whenever Allah sends a messenger, He seizes the people with distress and affliction that they might humble themselves.

Has God sent a messenger into America? Has God warned America? And has America been proud against God and His Warner, so that America, and the Black man, must now be seized with distress and affliction that they might humble themselves?

Oh, America! Have you not considered Pharaoh?

And the scriptures teach us that Almighty God heard their moaning and their groaning, and came to see after their cry! And raised a Warner from the midst of the slave!

Oh America! Should not this be a warning to you?

Nebuchadnezzar and Belshazzar, the great Kings of Babylon, held within them the Hebrews. But the Hebrews did not belong to Babylon; yet, they were defiled by the Babylonians. They were mocked! They were scorned! They were enslaved!

But God raised up Daniel from the midst of the slaves to be a Warner to those great kings.

Elijah Muhammad’s duty was to teach 30 million Black people in America that our time of deliverance and justice had come; that we could no longer depend on White people to care for us! That if we would be a great people, we would have to begin caring for april 14, 2020 The Final Call 21 ourselves.

He warned America to let the Black man go, and let him do something for himself, and help him to go for himself.

Oh, America! You went to war with Germany. You destroyed her cities and her towns, but after the war was over, America, you helped Germany to rebuild. … We helped you in your war with Germany.

Oh, America! You went to war with Japan. You defeated Japan; you humbled her, and brought her to her knees. And after the war was over, America, you helped Japan to get on her feet. … But we helped you, America, to fight your war with Japan!

But how do you treat those who helped to reap down your fields and build your country? You tell us we have gone as far with you as we can go.

You send billions of dollars overseas! But my beloved Black brothers and sisters are dying from hunger and starvation! And you say that they are a welfare burden.

What about Germany? What about Japan? What about Israel? What about your friends around the world? What have they done, America, to build you up? It seems that the more we work for you, the more you hate us, and give us evil in return.

We say to you: You have entered a time of trouble because you are mistreating the Black man of America whom God wants to go free to build a nation of self.

And you know this, America! But you refuse to obey God’s orders coming from a Divine Messenger from among us, so reap what you have sown.

My beloved Black brothers and sisters, you, too, are having a great time of trouble.

You paid no attention to the Honorable Elijah Muhammad when he called you to do for yourself. You laughed at him, you mocked him, you scorned him, you ridiculed him! And now, Almighty God is showing you that the people that you put your faith and trust and confidence in over God and His Servant and The Truth, which was brought for your redemption and salvation—now your rejection is bringing us into a time of trouble.

But this distress and this trouble and this affliction is only that you and I might humble ourselves. It is not too late, but this is the final call.

Oh, my beloved Black brothers and sisters: We must unite! We must stop this petty bickering among ourselves. We must break down every artificial barrier that keeps us divided against self.

Oh, you mighty Black leaders: Stop petitioning Washington to help you, and turn inward to self, and use all of the skills and resources that we have at our command to build the Black man up in this great time of trouble.

My beloved brothers and sisters: We plead with you, in this time of adversity and difficulty and stress and affliction, to come home to God, and, come home to yourselves, and come home to each other.

And you that lead; you that preach; you that teach: Study deeply into that which will deliver our people! And with boldness and straightforwardness, deliver The Truth! And guide the people with Justice! For we have entered a great, great time of trouble, but this time of trouble signals the approaching of our deliverance!

Unite, Black man; and fly to Almighty God Allah for refuge under the banner of the Teachings of the Honorable Elijah Muhammad.

May Allah grant you the Light of Understanding, and, keep you hidden under His wings of protection in this Great Time of Trouble, as I greet you in peace in the Arabic language: As-Salaam Alaikum (Peace Be Unto You).