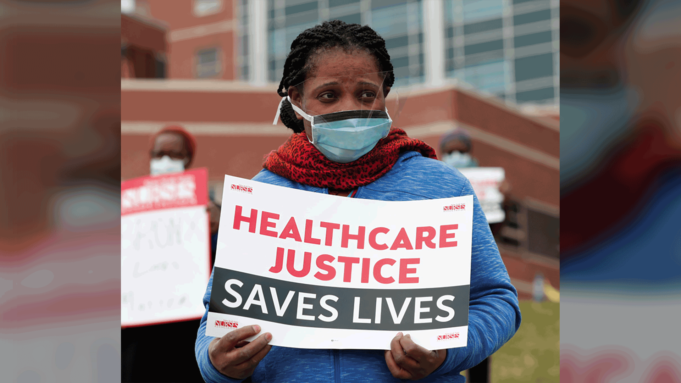 NNPA/FCN)—Early data and deaths are showing Blacks are disproportionate victims of the Covid-19 pandemic based on health and other problems rooted in historical oppression and inequity.

Congressional leaders have called for more data collection and release of data based on race as the pandemic enters what the White House called a crucial phase in early April.

Dr. Benjamin F. Chavis, Jr., National Newspaper Publishers Association president and CEO, recently issued an alert concerning the pandemic and nearly 50 million Black Americans. “Black America is now in a state of emergency as a result of the disproportionately deadly impact of the coronavirus pandemic on our families and communities across the United States,” Dr. Chavis stated.

“Black Americans should stay at home and only leave home for critical life-essential reasons,” Dr. Chavis emphasized. And, he added, before the spread of the coronavirus, Black Americans were already disproportionately burdened with multiple preexisting health conditions, including asthma, diabetes, and heart disease, our communities are more vulnerable to the impact of the coronavirus, including higher rates of fatalities.”

But it’s not just the health status of Blacks that makes them more susceptible to Covid-19, it’s also their place in the workforce and society, observed Margaret Kimberly in a piece published by BlackAgendaReport.com.

“While those in the managerial class work at home and use teleconferencing to communicate with one another, less than 20 percent of Black workers have this capability,” she noted.

“We see this dichotomy play out as a group of mostly Black sanitation workers in Pittsburgh, Pennsylvania, carried out a one-day work stoppage. They demanded protective clothing and hazard pay for incurring risks of Covid-19 infection while on the job. Whole Food employees and workers at an Amazon warehouse in Staten Island, New York, took similar actions, but the Staten Island strike leader was fired. Jeff Bezos didn’t get to be the richest man in the world by respecting workers’ rights.

“As higher paid individuals work at home, people who don’t have that luxury risk their lives just getting to their jobs. In New York City subways are largely empty, but not in poorer neighborhoods. Subway travel has dropped 90 percent overall in recent weeks, but at subway stations in the Bronx, the poorest of the five boroughs, ridership levels are unchanged for people who work as home health aides, grocery store employees and construction workers. Their plight is exacerbated as subway trains now operate less frequently and passengers are crowded together in defiance of all ‘social distancing’ rules required to prevent corona virus infection,” she added.

The columnist continued, “The structures that keep Black people persistently at the bottom of every positive measure and at the top of every negative indicator are firmly in place. It is no surprise that as the nation struggles with a preventable crisis that Black workers would be adversely impacted. Of course, the remedy supported by the Democratic and Republican parties does nothing to help.

“The recently passed $2 trillion stimulus bill is another give away to big business and wealthy individuals. It adds tax cuts for the rich on top of the tax cuts already enacted that have become a customary feature of American politics. The bill provides a measly, one time maximum payment of $1,200 to everyone who filed a tax return in 2018 or 2019. In neighboring Canada, the government provides $2,000 per month for four months to assist workers with the Covid economic downturn. $1,200 is chump change for people who are once again treated like chumps.”

To top it off, many cannot apply for unemployment benefits as state agencies can’t handle load and websites crashing, she wrote. “There should be no turning back to the pre-Covid-19 days of accepting the bipartisan austerity regime. It is dedicated to making life as miserable as possible for the masses of people and actively crushes any efforts made on behalf of even minimal change,” she argued.

A Pro Publica report revealed that Blacks made up almost half of Milwaukee County’s 945 cases and 81 percent of its 27 deaths in a county whose population is only 26 percent Black.

Milwaukee is one of the few places in the United States that is tracking the racial breakdown of people who have been infected by the novel coronavirus, offering a glimpse at the disproportionate destruction it is inflicting on Black communities nationwide.

In Michigan, where the state’s population is 14 percent Black, African Americans made up 35 percent of cases and 40 percent of deaths as of April 3.

Detroit, where a majority of residents are Black, has emerged as a hot spot with a high death toll. “Michigan is being ravaged by COVID-19. As of Sunday (March 29) 132 people in the state lost lives due to the virus. Of that, ‘Detroit and suburban Wayne County combined account for 49 percent of all confirmed cases of coronavirus in Michigan—and 42 percent of the 132 deaths. That’s disproportionately high to Wayne County’s share of Michigan’s population, which is about 17.5 percent,’ ” wrote Harry Colbert, Jr., managing editor for the Black news outlet InsightNews.com. He quoted from a Crain’s Detroit Business report. Detroit has the nation’s highest percentage of Black residents at nearly 80 percent, he noted.

According to Pro Publica, Louisiana has not published case breakdowns by race, but 40 percent of the state’s deaths have happened in Orleans Parish, where the majority of residents are Black.

Illinois and North Carolina are two of the few areas publishing statistics on Covid-19 cases by race, and their data shows a disproportionate number of Blacks were infected, according to the report. In Charlotte, N.C., the Associated Press reported April 1 that Blacks were “disproportionately affected by Covid-19, according to data released by local health officials.”

“By comparison, the U.S. Census estimates from last July show African American residents make up only 32.9 percent of Mecklenburg County’s population,” it said.

Public radio station WBEZ reported April 5 that in Chicago, 70 percent of Covid-19 deaths were among Blacks. “The Covid-19 virus is killing Black residents in Cook County at disproportionately high rates, according to early data analyzed by WBEZ. While Black residents make up only 23 percent of the population in the county, they account for 58 percent of the Covid-19 deaths. And half of the deceased lived in Chicago, according to data from the Cook County Medical Examiner’s office,” said WBEZ radio.

“As of Saturday (April 5), 107 of Cook County’s 183 deaths from COVID-19 were Black. In Chicago, 61 of the 86 recorded deaths—or 70 percent—were Black residents. Blacks make up 29 percent of Chicago’s population. The majority of the Black Covid-19 patients who died had underlying health conditions including respiratory problems and diabetes. Eighty-one percent of them had hypertension, or high blood pressure, diabetes or both. As the virus continues to spread, the high mortality rate for Black residents is alarming,” the Chicago Public Radio station said.

“It can be more difficult for Black residents to practice social distancing because the population is more likely to use public transit and hold jobs that can’t be done from home. In poorer communities in the city, persons of color are also more likely to live in crowded homes, experts say,” said WBEZ.

In Illinois, the “number of Black residents with Covid-19 statewide is also disproportionately high. Blacks account for 38 percent of the confirmed cases in Illinois but they are only 14 percent of the population. The state has not released a racial breakdown for deaths, although Illinois is one of the few states that keeps Covid-19 data with a racial breakdown,” reported WBEZ.

While the CDC usually tracks disease including race, Pro Publica was unable to get numbers about the pandemic’s breakdown along racial lines. Five members of Congress blasted Secretary of Health and Human Services Secretary Alex Azar, saying the federal government is “currently failing to collect and publicly report on the racial and ethnic demographic information” for Covid-19 tests and patients.

The Democrats, in a letter, said, “Without demographic data, policy makers and researchers will have no way to identify and address ongoing disparities and health inequities that risk accelerating the impact of the novel coronavirus and the respiratory disease it causes.”

“Although COVID-19 does not discriminate along racial or ethnic lines, existing racial disparities and inequities in health outcomes and health care access may mean that the nation’s response to preventing and mitigating its harms will not be felt equally in every community,” said Senators Elizabeth Warren, Cory Booker and Kamala Harris, and Representatives Ayanna Pressley and Robin Kelly, who signed the letter.

“We know in the U.S. that there are great discrepancies in not only the diagnosis but the treatment that African Americans and other minorities are afforded,” stated Dr. Ebony Hilton, associate professor of anesthesiology and critical care medicine at the University of Virginia Health Systems.

“So, I want to make sure that in this pandemic, that Black and Brown people are treated in the same way and that these tests are made available in the same pattern as for white people,” Dr. Hilton said.

Medical experts have also sounded the alarm that the virus could well be transmitted through the air.

“Currently available research supports the possibility that (Covid-19) could be spread via bioaerosols generated directly by patients’ exhalation,” Harvey Fineberg, who heads a standing committee on Emerging Infectious Diseases and 21st Century Health Threats, wrote in an April 1, 2020 letter to Kelvin Droegemeier, the head of the White House Office of Science and Technology Policy.

Dr. Fineberg penned the letter in response to a request from the White House. The National Academies of Sciences, Engineering, and Medicine convened a standing committee of experts to help inform the White House on critical science and policy issues related to emerging infectious diseases and other public health threats.

“The results of available studies are consistent with aerosolization of virus from normal breathing,” Dr. Fineberg wrote.

He noted an airflow modeling study that followed a coronavirus outbreak in Hong Kong in the early 2000s supports the potential for transmission via bioaerosols.

In that study, the significantly increased risk of infection to residents on higher floors of a building that was home to an infected individual indicated to the researchers a pattern of disease consistent with a rising plume of contaminated warm air.

A March 2020 Cambridge Research study of those with influenza revealed that 39 percent of individuals exhaled infectious aerosols, which experts noted that, as long as an airspace is shared with someone else, breathing in the air they exhale, it’s possible for airborne transmission of the coronavirus.

“If someone has the disease, they don’t have to cough and sneeze or spit. If you then go into their space, you can probably get it,” Dr. Guerrera stated.

Some experts said they are convinced that a primary reason that governments and organizations like the Centers for Disease Control and Prevention and the World Health Organization have shied away from stating that the virus is in the air is to prevent panic and because it could take years and cost hundreds of millions of lives before indisputable evidence can be presented.

“We shouldn’t let perfect be the enemy of convincing,” Michael Osterholm, an infectious disease epidemiologist at the University of Minnesota, stated.

A spokeswoman for the WHO told NNPA Newswire that the organization is focused solely on treatment and trials.

(Stacy M. Brown, a national writer for the NNPA Newswire, and his wife have tested positive for Covid-19. The Final Call and Black-owned newspapers across the country pray for their complete recovery.)