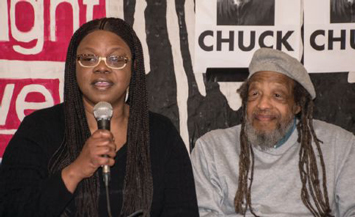 “The MOVE Organization is a family of strong, serious, deeply committed revolutionaries founded by a wise perceptive, strategically minded Black man named JOHN AFRICA. The principle of our belief is explained in a collection of writings we call ‘The Guidelines,’ authored by JOHN AFRICA. To honor our beloved Founder and acknowledge the wisdom and strength He has given us, we say ‘LONG LIVE JOHN AFRICA!’ ”

(Read more at http://onamove.com/, website of the MOVE organization.)

This writer remembers living on 416 N. Preston Street, in West Philadelphia not far from the MOVE compound, located in the Powelton Village neighborhood of West Philadelphia about four or five blocks away from my family’s home. In 1976 to 1978, this writer was a victim of the “street life and landed in prison May 1978.” I was able to view the blockade set-up against MOVE, before going to prison.

I met the five MOVE men at Holmesburg Prison initially around September/October 1978 before being convicted and sentenced November 1979. In December 1979, I was transferred from Holmesburg Prison (Philadelphia County) to State Correctional Institution Graterford, Pennsylvania, for classification and January 1980, I was transferred from SCI-Graterford to SCI-Camp Hill, Pennsylvania.

In February 1980, I was sent back down to Holmesburg Prison to meet with my appellate attorney. It was then that I received official information that the Honorable Minister Louis Farrakhan started rebuilding the Nation of Islam from its destruction in 1975. When I found out that Minister Farrakhan started rebuilding the Nation of Islam, I immediately joined on with the men the Nation of Islam at Holmesburg. We started the process of reestablishing “Muhammad’s Prison Program,” as it was called during that time, by submitting proposals to the Prison Warden appealing for the “Right to Worship.” We had no meeting place, so we met in the prison yard. Brother Delbert Africa knew of our plight to get a meeting place and offered to share office space that the prison staff gave to MOVE for their meeting place. This office space was originally “prison cells” converted into office space.

The men of the Nation of Islam also received donated audio tapes of Minister Farrakhan from Brother Jehron Muhammad aka (Jehron 4X Hunter) out of Mosque No. 12 in Philadelphia. However, we didn’t have a cassette player to play our audios. Well, Brother Delbert Africa let us use MOVE’s boom box cassette player. The Nation of Islam and MOVE have been united for decades with a rich his-Prison Reform Ministry welcomes Delbert Africa home by Gregory Muhammad tory of struggle inside of the “Belly of the Beast.”

Brother Delbert Africa is now free! He was released on January 18, 2020. He was freed from SCI-Dallas, Pennsylvania. “Brad Thomson, a member of Delbert Africa’s legal team, said the decision to release him on parole affirms what the movement to free the MOVE 9 has been arguing for decades: that their continued incarceration is unjust,” The UK-based Guardian newspaper reported January 18. Mr. Thomson continued by saying, “With the release of Delbert, that leaves Charles ‘Chuck’ Africa as the last member of the MOVE 9 to still be in prison. Chuck went before the parole board last month and we are optimistic that he will be released in the very near future.”

When this writer thinks of Rodney King, who was violently beaten by LAPD officers back on March 3, 1991 for allegedly “fleeing and evading” on California State Route 210, I reflect on the unjust violent beating of Delbert Africa back in 1978, who didn’t commit any crime.

Brother Delbert Africa had this to say during a January 21, 2020 interview: “A cop beat me with his helmet. Smashed my eye. Another cop swung his shotgun and broke my jaw. I went down, and after that I don’t remember anything till I came to and a dude was dragging me by my hair and cops started kicking me in the head. Their excuse later on is they thought I was armed. I was naked from the waist up.” So, this writer recognized that the one of the first Black man beaten on national television since the ‘60s and earlier wasn’t Rodney King, it was no doubt Brother Delbert Africa.

Brother Delbert Africa stated in the interview: “I want to keep on pushing the whole front of fighting this unjust system. I want to keep on pushing it and do as much as I can in my time here as dictated by the teachings of John Africa. Keep on working, stay on the move.” He continued, “I’ve been made stronger by the incarceration because of that God force that sustained me throughout the years and made me stronger in my beliefs and understanding that this system is wrong, unjust and racist. And the way to change it is not only to point the finger at you or anybody else, but to point the finger at myself.”

He talked about what he experienced at the “Round House,” which is the Philadelphia police headquarters located at 8th and Race Street. He stated: “The cops said, ‘is this the one, is this the one, got James, got James.’ I said, ‘who the hell is James?’ And they, talking about, somebody got James Ramp, the cop. “I don’t know who no James Ramp, leave me the hell alone. And, they threw me in a cell away from Eddie and Phil and them. I was over in a cell by myself. About an hour later, they came stripped me down, took all my clothes and gave me a gunshot residue test and then took me over and put me in with Phil and I believe Mike. Later, on, we just got arraigned and then we got sent up the road, that was August 8th. It wasn’t until later when we found out how horrible they had treated the women on the way, they pulled the wagon over and threatened to kill them; all in the name that we were supposedly killed James Ramp.”

“I don’t got no remorse, well, mainly, I know no MOVE people had anything to do with his shooting and the other thing is, he didn’t even have to be there. The man wasn’t on duty. James Ramp wasn’t on duty. They said, he came out to assure the safety of his people he trained; but he didn’t have to be there. He came out because he had a chance to kill some Black folk and that’s how that go,” he said.

It is clear MOVE did not kill James Ramp. They wanted the public to believe that MOVE shot a cop. He was shot from behind. None of the MOVE members had gunshot residue on them.

Brother Walter Palmer, who is a University of Pennsylvania history professor, talked about being a chief negotiator for MOVE. He made the following amazing statement: “This crime was not the crime of MOVE. It was a crime of the state. For 40 years, these people spent their life in jail for a crime they did not commit.”

Nisa Islam, Staff Writer - November 4, 2020
Why Black hopes for home ownership which often leads to wealth-building continue to dwindle Homeownership for many is...

Covid-19 still exploding in prisons and threatens the outside world

Time Has Arrived That Allah Will Fulfill His Promise