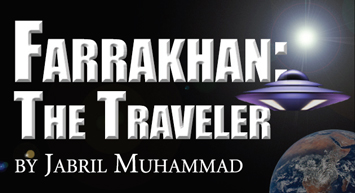 I’m repeating what is in Black and bold from my last article. Why?

“The Honorable Elijah Muhammad gave the Honorable Minister Louis Farrakhan his assignment when he first saw him. He has not changed his view of him from that time to now   … .”

Now, Master Fard Muhammad revealed the greatest secrets, of the most important of all knowledge to the Honorable Elijah Muhammad. In the process of informing the rest of us, and the world, he (with Allah God’s help) is like cracking an atom: the Honorable Minister Louis Farrakhan. Why the “greatest secrets?” Why did God Himself after trillions of years make Himself known in person here in America and at this time?

The scientists, who look into outer space for the ultimate answers to the mystery of life and the universe, are looking at the past activity of wise original Black man, who are not here now. However, the scientists are trying to look into the workings of their minds–as they look at, and in some small measure into what those minds produced throughout the universe.

Increasingly the scientists of this world are grasping the profound inter-relatedness, or the deep connections, that everything has to everything else, throughout creation. As they grow to see this unity, an increasing number of them are looking with greater respect on the findings of the religious scientists.

What will they conclude if they go far enough? They will find that the source of the physical aspects of the heavenly phenomena, or objects in outer space, is the same source from which comes the magnificent insight contained in the scriptures. They are learning just why ultimately true science does not conflict with the true religion, which is the nature of God, Himself, Who is also the Author of the laws that govern creation upon which they have built their sciences; out of which they have produced their modern world.

Again, these scientists are learning that the source of both the heavenly phenomena in outer space and the source of the wisdom of the scriptures is right here on this earth.

Consider it like this: Picture a person, whose desire to understand something reaches its greatest intensity. The matter (or subject) that this person seeks to know, and understand, is of great value, utility and has close relevance, or connection to that person’s life and concerns.

When that person gains that increased knowledge, and enters that understanding which meets, or satisfies, the intensity of his/her desire to understand; the energy, or the power that is released, or that is generated in that person, produces great changes in that person. This person is now able to generate stupendous changes in the world.

When, however, the desired object, or subject, one desires to understand, is the Supreme reality–God Himself–and the person’s desire is rooted in an intense love; and at the same time God loves that person and wants that person to understand Him; the resulting union, or unity, which is born out of this intense mutual love, initiates a process that generates more power than the process of fusion which fuels the sun!

This explains what is taking place in Black people, all over America. God’s hidden wisdom is impacting and entering Black people, and releasing the latent powers of love and strength in the Black man and woman. This, which is the greatest revelation, of the greatest wisdom, hidden until now is one of the fundamental elements in the core of that which is producing a new world, at the same time this old world is dying of itself? Of course, the presence and growth, or development of the new, is a big factor in the removal of the old.

In unveiling the truth of God and Satan, he was uncovering the roots of what ails humanity. That was and is key to getting to humanity–beginning with Black people of America, and America too–to take the divine prescription.

The Honorable Minister Louis Farrakhan is doing his work, as given to him by   (1) the nature of his makeup; by (2) his teacher; by (3) His God; and further back in time, by (4) the Scientists Who foresaw these times; and assigned the Minister his work thousands of years ago, and wrote of him in the scriptures that we have.

Even so, most people in America do not like or respect, much less love the true God and His truth. Yes. Most people claim to love “God”–but do they?

We are about to touch on that which really tests, in one of the most profound ways, our love for God. As we do, let us consider and reflect on the fact that the Honorable Minister Louis Farrakhan does in fact represent his teacher’s broad mind; his teacher’s depth of compassion, and his teacher’s penetrating grasp of the difficult position white people are in; especially those who are trying to be decent.

Who put him in this situation? Why am I asking this question now?