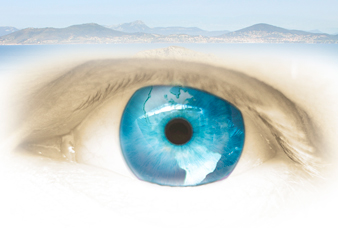 The prestigious National Geographic Society has reported that scientists studying DNA have now confirmed that “Europeans as a people are younger than we thought.” Using the unbiased measure of genetic science they point to the same birth date for the European as did The Most Honorable Elijah Muhammad. Prof. Alan Cooper, director of the Australian Centre for Ancient DNA at the University of Adelaide, analyzed DNA from ancient skeletons and found that the genetic makeup of modern Europe was established just 6,500 years ago.

It is Mr. Muhammad who, in the face of much mockery and ridicule, taught that the White man first appeared 6,000 years ago on the Island of Patmos (or Pelan), in the Aegean Sea, where they had been “made” by a 600-year process of selective breeding called “grafting.” Under the command of a Black scientist named Yakub, the 59,999 Blacks who came with Yakub to the island were placed under a system of mating that was based on skin color, in which only lighter-complexioned babies were allowed to survive. Over the course of many generations the population of Patmos began to grow lighter and lighter until, after 600 years, the people became very pale with blue eyes and blonde hair. From this island-based tribe of white-skinned albinos came a behaviorally aggressive race of rulers—namely, the Caucasians—who then spread into every corner of the world and who now represent 9 percent of the world population (1 in every 11 human beings).

This teaching of the birth of the White race has been central to the belief system in the Nation of Islam and it has been met with hostility and profound resistance by its critics, who have most commonly termed it “hate teaching.” The Most Honorable Elijah Muhammad referred to the Caucasian as “The new man” who “came from us, but he is different from us.” But that “new man” teaching contradicts a hypothesis that modern humans emerged in Europe 40,000-50,000 years ago. It has created a theological schism that has resulted in an impasse in interreligious understanding. But it is a theological impasse that secular scientists have now stepped into to overcome the controversy.

Dr. Jonathan Pritchard estimates that the point in time when the genes of the Asian and European populations were altered was 6,600 years ago—the exact date that the Honorable Elijah Muhammad taught that Mr. Yakub began his Patmos Island grafting process!

Prof. Cooper’s pinpointing of this particular birth date of 6,500 years has generated deeper questions about the genetic process leading up to this date. Dr. Cooper said: “The genetics show that something around that point caused the genetic signatures of previous populations to disappear. However, we don’t know what happened or why.” But over 80 years ago Elijah Muhammad both pinpointed the date and detailed the process by which it occurred. This latest study by Prof. Cooper fine tunes and fortifies other recent research. Dr. Keith Cheng, a geneticist of Pennsylvania State University College of Medicine led a study that shows the evolution of a gene for skin color and suggests that Europeans “lightened up quite recently, perhaps only 6,000 to 12,000 years ago.”

Dr. Hans Eiberg of the University of Copenhagen confirmed that all blue-eyed humans have a “genetic mutation” that he says occurred 6 to 10 thousand years ago. His team found a specific gene, known as the OCA2 gene, which if altered would result in human beings without melanin in their hair, eyes, or skin color—a condition known as albinism. Thus, this OCA2 gene seems to have been targeted and manipulated by some force or event around 6,000-plus years ago.

Researchers at the University of Chicago had found “where genes appear to have been reshaped by natural selection…within the last 5,000 to 15,000 years.” Incredibly, Dr. Jonathan Pritchard estimates that the point in time when the genes of the Asian and European populations were altered was 6,600 years ago—the exact date that the Hon. Elijah Muhammad taught that Mr. Yakub began his Patmos Island grafting process! The scientists say that “the selected genes, which affect skin color, hair texture and bone structure, may underlie the present-day differences in racial appearance.” But who “selected” them and why is left for speculation.

These scientists—Cooper, Eiberg, Cheng, and Pritchard—have scientifically zeroed in on a date in time that corresponds theologically to the Teachings of the Nation of Islam. But the scientists are yet unable to account for the reason for this dramatic genetic convulsion in the human family. Prof. Cooper said: “This population moves in around 4,000 to 5,000 [B.C.], but where it came from remains a mystery, as we can’t see anything like it in the areas surrounding Europe.”

The Hon. Min. Louis Farrakhan spoke about The Messenger’s controversial teaching: “Yakub was a scientist who saw in the genetic makeup of the Black man that he could bring out of us a new people, the opposite of the original. That is not evil. That is high science.”

And it is this high science of racial grafting that has been repeated many times since Yakub’s first experiment on Patmos. The lengthy history of European colonization was examined in the 2012 Final Call article “Echoes of Mr. Yakub after Patmos,” which shows how Whites repeatedly used islands as laboratories to alter the racial features of the peoples of Africa, the Caribbean, and South America, creating mulatto sub-races that were used to rule over the African and Indian slaves. In other words, Whites never mocked Yakub’s high science—they repeatedly and successfully followed it to a T.

In fact, there are many echoes of Yakub’s work that have been chronicled by other histories, religions, and folklores, including Judaism. The ancient rabbis use the biblical account of Jacob’s grafted flocks of sheep and goat to bear witness to the teachings of Mr. Muhammad. Genesis 30:35 says that Jacob (English translation of the name Yakub) was able to produce unusually colored livestock through the use of a skillful breeding technique. Significantly, it took Jacob six years to successfully change the color of the flock. The book of Jewish traditions called the Midrash Rabbah actually uses this Bible story to explain the birth of White children to Black parents, which they see as a totally positive event—just like Yakub. Significantly, these Caucasian rabbis—who ALWAYS present themselves in their writings as superior to Blacks—use this apocryphal passage to unwittingly explain their own racial origin in terms of a breeding process.

And with the assistance of Lawrence Guthrie’s powerful little book The Making of The Whiteman, we are led to other more recent testimonials. The Baptist theologian Bernard L. Ramm explained:

By scientific breeding we can shuffle these genes with their characteristics and breed traits in or breed them out….The laws of heredity plus principles of separation or selection operating over a period of time will produce the various races of the world.

Religious leaders are not the only ones alluding to a recently created man. Scientists have also grappled with what they saw as the unusual appearance of this odd human anomaly, the White man. The Dutch anatomist Lodewijk “Louis” Bolk wrote in Origin of Racial Characteristics in Man, “White skin…started from an ancestor with a black skin, in whose offspring hair and iris color were suppressed more and more.”

The notable English naturalist Charles Darwin concluded that without some form of selective breeding, such skin color differences simply “cannot be accounted for in a satisfactory manner”:

We have thus far been baffled in all our attempts to account for the differences between the races of man; but there remains one important agency, namely, Sexual Selection, which appears to have acted as powerfully on man as on many other animals.

The English physician James Cowles Prichard likewise concluded that the physical differences between the races of man could only have resulted from a method comparable to “the process of artificial selection carried on by plant and animal breeders.” It seems, he said “probable that the fairest races of White people of Europe, are descended from…Negroes.”

[I]t is evident that distinct races could not have been established and perpetuated except by the aid of isolation, chiefly geographical.

The ancient Egyptians worried about an immigrant-tribe of blue-eyed people among them that seemed to have a proclivity for trouble-making. They had red or blonde hair and blue eyes and lived at the edge of the desert. The Egyptians called them Tamahu—the created ones—a clear allusion to their unusual origins.

These are extraordinary testaments to The Truth taught by the Most Honorable Elijah Muhammad, yet none of these scientific witness-bearers have ever been labeled “haters.” They are just the latest to stand on the truths revealed by The Saviour and His most powerful servant, the Honorable Minister Louis Farrakhan.

(Visit the Nation of Islam Research Group online at http://www.noirg.org and join the conversation on FaceBook.com/NOIResearch and Twitter @ NOIResearch.)