As I thought over the best way to end these series of articles, that I started

the beginning of last year, and made them public in our paper–The Final Call, I decided to give my reaction to the Honorable Minister Louis Farrakhan’s addresses.

I do not make the headlines to my very short articles. That is the job of others.

The last two headlines read: “In a divine doorway to a new reality,” and “Do we know the Honorable Elijah Muhammad’s history?”

We cannot know the Honorable Elijah Muhammad’s history without knowing first and then understanding that history. Why? You must have an understanding of Minister Farrakhan’s history!

Many people do not know and understand the above paragraph. I intend to comment on this deeper when I end this series, Allah willing! 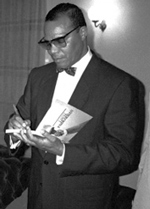 In volume 30 number 10 that includes a photo I took of Minister Farrakhan’s daughter–Sister Betsy Jean Farrakhan–and her experience with a “so-called UFO” which is real to us, Muslims followers of Minister Farrakhan. The Final Call staff titled this article “Understanding people and events in their proper context.”

If you do not understand the context and then… .

On January 4, 2011 myFoxphoenix.com, had a news article titled, “Arizona Falls on UFO ‘Watch List.’ Here is an excerpt from that article. “Have you seen any strange objects hovering in the sky lately? If so, you’re not alone. At least a dozen people reported seeing UFOs last month, putting Arizona on a ‘watch’ list.

“Whether or not you believe in UFOs, you can’t deny that there are a lot of reported sightings. December was busy in Arizona.

“12 UFOs sightings were reported in Arizona, putting Arizona on a watch group for the Mutual UFO Network, a well-known investigative organization.”

Who made these so-called UFOs and why?

I’m now going back to the ending of my last article and then go into Minister Farrakhan’s experience that he made very public and that he sent to the most “powerful” people in the USA and the reaction from the so-called UFOs!

He put his life on the line! What is their reaction–public and private? What is your reaction? What time is it according to your view of the Holy Qur’an and Bible? Do you know that Allah sees all?

Moreover, he went on to announce that his teacher was even at that moment very much alive and that he had come into tremendous power and was exercising that power in America and throughout the earth.

Minister Farrakhan then went on a series of speeches, throughout America, that his teacher’s return was imminent.

However, none of them were in the unique position of Minister Farrakhan with respect to that knowledge. None of them were given his assignment. So his announced conviction that the Honorable Elijah Muhammad was in fact alive and very active in world affairs was very significant indeed. It was in fact pivotal.

Now, how often has Minister Farrakhan’s position, that the Honorable Elijah Muhammad is not dead, been reported in America’s press–along with the basis for his assertion? Why not?

How improbable was this event during the time period when he made such an announcement? If he was right–that his teacher was indeed alive–how much information did his statement yield? What are the ripple effects of this statement and how strong are they today? What impact, or power, does this announcement have on every other current reality?

What were the means by which Minister Farrakhan became convinced that his teacher was still alive? On what grounds or evidence were his convictions based? What were his reasons for publicly making such an astounding declaration, which seemingly went against all of the facts, common sense and all that was reasonable? Why did he stake his credibility, why did he risk all that he was and is as well as his effort to rebuild the Nation of Islam, on this conviction? What followed as a consequence of his bold statement? Why did the Nation of Islam grow rather than die after such an announcement?

The answers to these key questions take us into the nucleus–into the very core–of what the Nation of Islam, as led by the Honorable Louis Farrakhan is in fact all about. The answers to these questions emphasize the accuracy of the explanation and the definition of the Nation of Islam, which was given by the Honorable Elijah Muhammad and borne witness to by Minister Farrakhan.

Does this statement–that the Honorable Elijah Muhammad is alive–really matter? How does this question relate to the average person struggling to make a living in these increasingly hard times? Does it really matter to the wealthy white men and women, in positions of great power throughout the world? What difference does his state of being mean to anyone, anywhere on this earth? Does this issue really make a difference to the rulers of the most powerful government the white race ever produced–the United States of America?

The 1976 Church report (which was a government report) tells of the American government’s all out efforts to destroy the Nation of Islam. They could not overcome the power, which was with the Honorable Elijah Muhammad and the Nation of Islam, by which he resisted them and, indeed, overcame them time and again. By their own admission, in this investigation, and the resulting report or study, they bore witness to this.

So, was the power, which was with the Honorable Elijah Muhammad before 2/25/75, still with him in the Mercy Hospital in February 1975? Did that power get him out of there safely? If so, where did he go? Was that he who was in the hospital in the first place?

Is the power, which was with the Honorable Elijah Muhammad the same power, which has guided Minister Farrakhan around, through, over and under the numerous traps set for him by the enemies of the rise of the Nation of Islam?

“Will this same power be with Minister Farrakhan and the Nation of Islam, if and when the all out attack of the wicked, which is soon to come, is launched against him and his followers?

Again, will that same power be with the rest of us when the pogrom comes at us full blast?

The American Heritage Dictionary defines the term “pogrom” as “An organized, often officially encouraged massacre or persecution of a minority group, especially one conducted against Jews.”

Most of the scholars of religion believe that the words of Jesus, in the gospels, about the final persecution–or pogrom–of his followers, were typical, or partly fulfilled a few decades later in the Romans persecutions of the Jews, especially in Jerusalem.

To be more specific, Jesus spoke of severe persecutions to befall his followers, in the 24th chapter of Matthew; in the 13th chapter of Mark, and in the 21st chapter of Luke, and elsewhere. History teaches that the Jews were persecuted and massacred by the Romans in the years of 66 to 70 AD. But were the words of Jesus fulfilled in those persecutions? Or was that intense persecution a sign of what would come at the end of this world right here in America?

More specifically, could these words of Jesus refer to what the wicked will launch–full force–against the Nation of Islam? If so, why must this take place? Why will God Almighty allow this, if this is to or must occur? How does this fit into His overall plan of salvation? What will be the final outcome?

If we look carefully at all of the terms of this prophecy and what really historically followed the persecution of the Jews by the Romans, it is clear that at best, what occurred near 2,000 years ago, to the Jews, was a sign of what is to happen to a group of people at the end of the world.

The great significance of this pogrom to occur at the end of this world it will prove the key event that finally brings down this world!

America is increasingly admitting her extreme wickedness. This is shown, for example, in her books and movies about the “Indians.” She has apologized to other peoples for her wicked mistreatment of them.

For instance, America not only apologized to Japanese Americans for her imprisonment of them during World War Two, but also took millions of dollars out of her treasury to give a token of her repentance.

But America has never repented of her extreme wickedness towards Black people whom she enslaved and whose descendants are yet in her midst. She has never even given us even a phony public apology for four centuries of injustice. Why?

The extremely evil and deceptive policy of the U.S government, against the Black man and woman of America is related to a secret–the most profound of all secrets.

This secret includes the identity of the Black man and woman in her midst–especially in relation to the prophecies contained in the scriptures, in which most Americans claim to believe. This was among the secrets to be revealed at this time, which was written of long ago in the scriptures.

Certain highly positioned persons have desperately worked for decades to cover up or confuse the public’s mind respecting the real truth of the Nation of Islam, just as they have worked during these same decades to cover-up the reality behind the so-called UFO phenomena. The truth of both have been placed by this government’s top officials, or this world’s highest powers, in one way or another, in not just the “top secret” category, but into several levels above the “top secret” category, in that which they call: “above top secret.”

In short, the truth of Minister Farrakhan, his teacher, and his teacher’s Teacher, and the followers and the entire scope of the teachings are at the very top of America’s secrets.