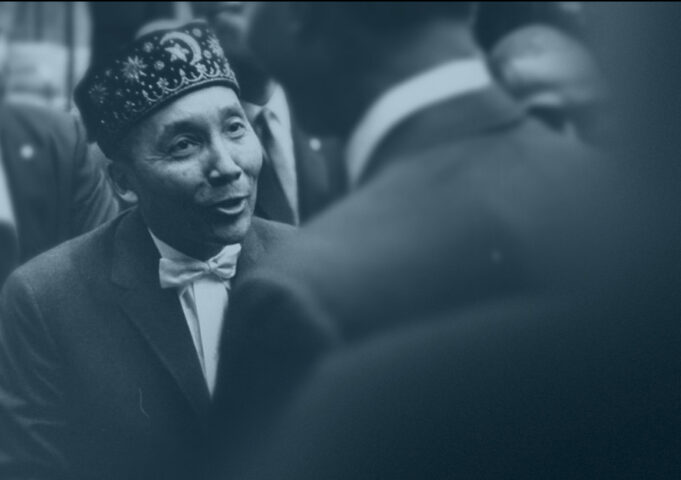 “The Messenger made the message very clear. He turned alienation into emancipation. He concentrated on taking the slums out of the people and then the people out of the slums.”

“He was the father of Black consciousness. His leadership exceeded far beyond the membership of the Black Muslims. For more than three decades, the Honorable Elijah Muhammad has been the spiritual leader of the Nation of Islam and a progressive force for Black identity and consciousness, self Determination and economic development.” –Reverend Jesse L. Jackson

“Elijah Muhammad has presented to Black people in this country a model of thrift, of hard work, of devotion to self, and of cleanliness of mind and body that we don’t get in many other places.” –Julian Bond, Chairman, NAACP.

Muhammad was a man “of unquestioned talents and leadership ability who has left an indelible mark on his times.” –Vernon E. Jordan, former executive director of the National Urban League

“He emphasized the elements of self-help, self-respect, and economic independence.”

“He made a distinct contribution, not only to his own organization but to the people of this country in that he showed what can be done with a little sacrifice and a little effort. In these participants, we would do well to emulate his philosophies and positions.”-Rev. J. H. Jackson, former President, National Baptist Convention U.S.A.

“This man and his work were a new frontier for Blacks in the United States and for Black people throughout the world. I admired him and I still admire his effort.” –Rev. Leon Sullivan, founder of Opportunities Industrialization Centers of America

“He was an outstanding citizen who was always interested in helping young people and especially the poor. He always exalted the basic family unit, which is something we should all admire, and he developed an educational system which preaches dignity, self-respect and accomplishment.”–Richard Daley, former Chicago Mayor

“Elijah Muhammad gave Blacks new confidence in their potential to become creative and self-sufficient people. In addition, he taught his followers the efficacy and rewards of hard work, fair play, and abstinence. It has been shown beyond a shadow of a doubt that the Muslims who have followed his economic teachings have been comparatively prosperous and have in many cases moved substantially ahead in their economic pursuits.”

“He gave also his people a successful formula for home and family life.

The rate of delinquency among Muslim children is extremely low. The rate of divorce is quite low. The stability of the Muslim home is ideal for which the rest of America might strive.”-Dr. C. Eric Lincoln, author Black Muslims In America, Professor, Duke Univ.

“His teachings of dignity, self-respect, discipline and a sense of responsibility are the great works he leaves behind. And this we admire no matter what our religion.” –Fr. George Clements, pastor Chicago’s Holy Angels Roman Catholic Church

“Mr. Muhammad’s life was one of peace, harmony and great integrity. He made the Nation of Islam a pillar of strength in Black communities throughout the country.” –Ralph Metcalfe, former Chicago Congressman