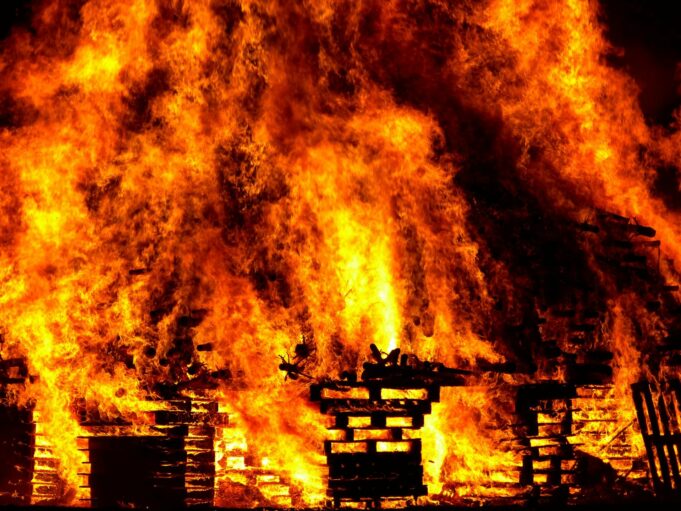 The so-called Negroes are the prey (Isa. 49:24) of the mighty United States as Israel was in the days of Pharaoh. They were a prey under the power of Pharaoh. According to the Bible, they had nothing like a share in the land of Egypt. A few cattle and the land or home given to Joseph’s father house in the days of Joseph all seemed to have disappeared in the time of Moses.

Jehovah appeared to Moses in the bush. Moses was made to see the bush in a flame of fire though there was no actual fire. The fire represented the anger of Jehovah against Pharaoh and his people. It was a declaration of a divine war against the Egyptians for the deliverance of Israel.

The time has arrived that Allah (God) should fulfill His promise made to Abraham. According to the Bible (Gen. 15:13, 14) we do not find wherein Israel had ever sought Jehovah through prayer or from any scripture; nor did they know of any prophet before Moses. The only knowledge we have is in the words of Jehovah’s address to Moses—that they knew Him only by the name of God Almighty (Ex. 6:3).

But the real issue was not in the name as much as it was in the time. It was the time that Jehovah should fulfill His promise, though Israel was a disbelieving people in Moses and Jehovah. Jehovah could not lie to His prophet, Abraham, though Israel was a rebellious people (disbelievers) and Pharaoh had to know the time of his end. There was a limit to his rule over the people of God, though they knew not their God nor their fathers. The time had arrived that they should be delivered from the power of Pharaoh, and that they should become an independent people in a land that they would be given that they could call their own.

The devils are universal snoopers. They pretend to be interested in your spiritual meetings, but only to listen to what you are saying among yourselves. You may see him in all of the churches and gathering places of the so-called Negroes listening in on their meetings to keep them from accepting the Truth (Islam). The so-called Negroes think that it is an honor to have the devils come among them because they are ignorant to this, their open enemies’ intentions.

I am for the separation of my people from their enemies; that they share not in their enemies’ destruction, even though I may lose my own life in this daring attempt to save them by the plain, simple Truth of God and Power. It must and will be done regardless of whom or what. It can be done in one day, but Allah desires to make Himself known in the West, as it is written of Him.

Our sixty-six trillion years from the moon have proven a great and wise show of the Original Power—to build wonders in the heavens and earth. Six thousand years ago, or to be more exact, 6,600 years ago, as Allah taught me, our nation gave birth to another god whose name was Yakub. He started studying the life germ of man to try and make a new creation (new man) which our twenty-four scientists had foretold eight thousand four hundred years before the birth of Mr. Yakub; and the scientists were aware of his birth, before he was born, as they are today of the intentions or ideas of the present world.