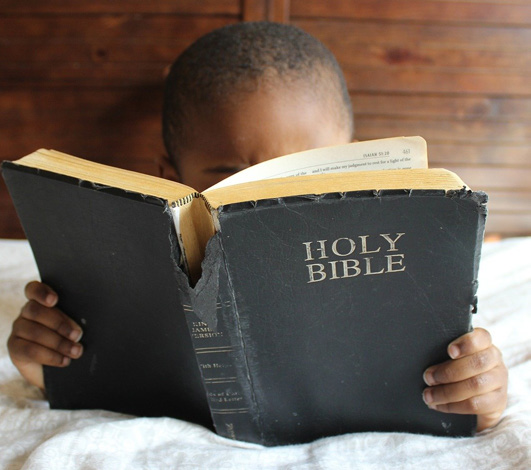 America and her people have been here, according to history, since a few years after Columbus, the explorer. She conquered the aboriginal red Indians, the original owners of the land, whom she found here and took it for a home for herself and kind. She has continued conquering until her conquering power has gone around the earth affecting every civilized nation; submission to her will. She was successful in forcing other people to bow to her will—whether they liked it or not.

Now it is the hand of God which is after America to force her into submission—a hand from which we have no defense as it is written and prophesied in the Bible, under the name of Babylon.

Jeremiah 51:25: “Behold, I am against thee, O destroying mountain, saith the Lord, which destroyest all the earth: and I will stretch out mine hand upon thee, and roll thee down from the rocks, and will make thee a burnt mountain.”

Jer. 51:53 says: “Though Babylon should mount up to heaven, and though she should fortify the height of her strength, yet from me shall spoilers come unto her saith the Lord.

America is under a destruction similar to that of ancient Babylon. In the Bible, Jeremiah, Isaiah, and Revelation of John prophesied concerning her. Babylon, there-mentioned is a future Babylon, and not a Babylon of the past.

America has enslaved all of the so-called Negroes and her evil mistreatment of them is similar to ancient Babylon’s enslavement and mistreatment of the Jews, according to the scriptures. It took the hand of God to bring the king of Babylon and his people into submission to the power of God.

He brought the surrounding kings and their power against ancient Babylon in the prime; the height of her glory—the hand writing on the wall—the casting of Daniel and his followers into a fiery furnace; making drunk the people of God with their strong wines and then mocking them—so has America done to the so-called Negro.

America makes him drunk with wine, whiskey and beer and then laughs at him. She put him into the fiery furnace—burned him at the stake while sitting around with her families, drinking intoxicating drinks and laughing at the burning flesh of God’s people.

There is no justice whatsoever. As Revelation gives it, “She made all the world drink of the wine of her fornication.” But an end is coming to such evil doings.

America has lived in peace—so far as foreign war is concerned. She has destroyed other peoples and their towns and cities. She has leveled them to the ground. She is still prepared to do the same with her great stockpile.

She says she has enough bombs and destructive weapons to destroy all human beings on the face of the earth three times, and still have some left. Of this she boasts. But Allah (God) has said to me that He will destroy America. He will bring her to her knees (humiliation).

The destruction sent to ancient Babylon and recorded in the Bible is the answer to most of what He has said to me will come upon the now rich America. Rain, hail, snow and earthquakes—these weapons all belong to God. America, how do you fight an army like this?

The four mentioned weapons of Allah (God) cannot be ignored. The whole year has been a year thus far of Allah (God) plaguing America day and night with storms, rains, floods; killing and destroying property.

And now the coming winter—hail has been falling in some places the size of golf balls, baseballs and footballs.

The rain continues to fall in places and a dreadful snow blizzard is now in the workings. A cold wind is brewing in the North to come against America, as it is written and prophesied in Job 38:22-23: “Hast thou entered into the treasures of the snow? or has thou seen the treasures of the hail, which I have reserved against the time of trouble, against the day of battle and war?”

Earthquakes are now again to be recognized, touching America lightly—but nevertheless they are here. With all of her wealth and preachings of Christianity, she has not been a good Christian herself. As Jeremiah says: “Arise, get you up unto the wealthy nation, that dwelleth without care, saith the Lord, which have neither gates nor bars, which dwell alone.”

This corresponds to America. She lives situated between the two greatest bodies of water of the earth, the Atlantic and the Pacific. And she is very careless. She rejoices in her evil and filth as though she is self-protected from the divine hand of God.

Jer. 50:31 prophesies: “Behold, I am against thee, O thou most proud, saith the Lord God of hosts: for thy day is come, the time that I will visit thee.” Allah (God) is visiting America with great destruction which He has to pour upon wicked America.

After their mistreatment of the so-called Negro for four hundred years, she desires now to deceive them and to cause them to suffer with her and share in her doom.

Jer. 50:6—”My people hath been lost sheep: their shepherds have caused them to go astray, they (white and Black preachers of Christianity) have turned them away on the mountains: they have gone from mountain to hill, they have forgotten their resting place.” (Their native people and country).

Jer. 50:7 “ All that found them have devoured them: and their adversaries said, We offend not, because they have sinned against the Lord, the habitation of justice, even the Lord, the hope of their fathers.”

The white man has opened all of his doors and avenues of temptation to lure the Negro in for total destruction.

Again we have a warning to leave a people with whom God is angry as the people of ancient Babylon were warned to do.

Jer. 51:45—”My people, go yet out of the midst of her, and deliver ye every man his soul from the fierce anger of the Lord.”

All of the plagues, destructions and judgment which Allah (God) used to destroy the wicked and disobedient from the time of Adam until this day will be brought upon America. Then she will be burned with fire. This is the time of trouble that shall bring America into insanity.