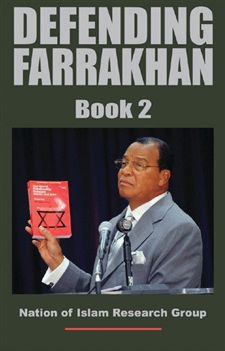 [Editor’s Note: This article is a reprint and was published online on June 7, 2013.]

How many people reacted to this book, in your city, title “Defending Farrakhan, Book 2?” How many were Black, White, Mexican and others—but important. Don’t react to me, but to God, Himself (Allah).

We can read the words contained in the book from the Honorable Minister Louis Farrakhan: “I asked the question, ‘Who are the real children of Israel’?

“The Honorable Elijah Muhammad has said that Almighty God Allah revealed to him that the Black people of America are the real children of Israel. And we are the choice of God; and that unto us He will deliver His promise.

“To all those who feel that the children of Israel are over in that place they call ‘Israel:’ You are mistaken. To the Christian Right, who feel that if you bless that Israel you will be blessed: For over 60 years, that nation has not been blessed.

“The Black man and woman of America—these are the people; that if you bless us, the God will take off of America some of the plagues that are now coming on America that will get worse after I have delivered this message.

“My declaring this, I know will divide scholars, theologians, Jews, Christians, and Muslims. But it is time, now, that a proper dialogue be set up to answer the question that I’ve raised and answered. It is time for the scholars to sit down and look at scripture and prophecy, to find out who is that Last One that would usher in The Kingdom and bring about the end of this present world.

“Once the light of the sun strikes the root of the tree, the tree dies. And what has happened to Black people, and white people, and Jews and Gentiles, is that a small group—10 percent—have deceived and misused 85 percent of the people; and sucked their blood to live in luxury at the expense of those who do not understand the law of cause and effect, and believe in a mystery god, and are poison animal eaters.

“But the wickedly wise have known the truth; and because they know the truth, and they know the time, they are working night and day to trick you out of the promise of God, and take you down to hell with them, because the time of their end has come!

“Who are the draftsman, and the architects, of such an idea that has dominated our planet for the last 4,000 years? Our historical research department has studied from the scholarship of Jewish historians, scholars, and rabbis; and we have published Volume No. 2 of The Secret Relationship Between Blacks and Jews. And in it, you will discover the architecture, and the architect.

“I sent this book, and another one that is printed called Jews Selling Blacks, to Mr. Abraham Foxman of the B’nai B’rith and to all the leaders of the major Jewish organizations. I sent it to President Obama, to Summers, to Ben Bernanke; to all the people that should know what was done to us and can no longer hide. That is why Jesus said, ‘You shall know the truth, and the truth shall set you free.’

“What truth shall you know? If you are not yet free—and you are not!—then you do not yet know the truth that Jesus was talking about, that would free you from your open enemy, awaken you, cleanse you, and reconnect you to the God Who has come for your and my salvation.

“In the book of Genesis, we get lots of pictures of God, and His Promise. In chapter 15, God is talking to Abram: ‘Know of a surety that thy seed shall be a stranger in a land that is not theirs and shall serve them and shall afflict them 400 years. But after that time’—God is speaking—‘I will come! And I will judge that nation which they shall serve. And afterwards, shall they come out with great substance. And go to their fathers in peace and be buried in good old age.’

“So how did they have any connection to the Holy Land? You see, after the process of grafting was completed, and they came back to Arabia, which is the Holy Land, the Honorable Elijah Muhammad said that within six months, they had turned the Holy Land upside down, because they were taught a system of tricks and lies that would divide the family; and it caused us to fight and kill one another, because of the falsehoods that have been put between us!

“Moses had a hard job to civilize the Caucasian from the hills and cave sides of Europe. He did have another assignment after he got them up in Egypt—but not with them.

“Have we been here 400 years? Are we strangers in a land that is not ours? Have we been afflicted in this land, every day of our sojourn here?

“In the book of Deuteronomy, Chapter 18, verse 18, God says: ‘I will raise them up a prophet from among their brethren, like unto thee, Moses …’ Moses was a civilizer: Moses took a man up out of the caves, and made him upright. Moses taught them how to cook food; how to bury their dead, as the bible teaches; ‘As Moses lifted up.’ It’s all about you.

“And you can’t have a man like Moses who’s preaching ‘integration.’ Moses wasn’t telling the children of Israel: ‘I want to integrate you into Egypt, so you can marry the sons and daughters of the Egyptians.’

“No! He was telling them: ‘You tell Pharaoh to let my people go!’ ”